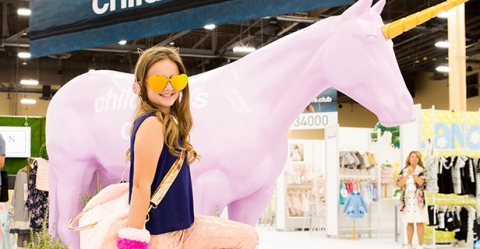 Smart fabrics, sustainable fashion and the ongoing tariffs dispute were only a few of the hot topics at this year’s MAGIC, the biannual fashion trade show that brought about 80,000 attendees to Las Vegas Feb. 4-7.

Comprising a dozen shows within the show, MAGIC covers nearly every aspect of the apparel, accessories, pool wear and footwear industries. This month’s event marked the last time the show will be collocated at both Las Vegas Convention Center and Mandalay Bay Convention Center (in case you missed it, learn more about this big show announcement here.)

At SOURCING at MAGIC, attendees could explore a microfactory complete with a body scanner, virtual fittings and direct-to-fabric printing. They could also touch jeans dyed with waterless technology, and get a deeper understanding of the impact fast fashion has on the planet through the X Ray Fashion virtual reality experience.

The ongoing tariffs dispute between the U.S. and China was evident in a recharted floor plan, which featured fewer Chinese manufacturers but also gave an opportunity to potentially new sourcing destinations.

“Without a doubt, the talk of a trade war and general feeling of a battle between President Trump and President Xi had made factory owners in China feel hesitant about going to February Sourcing,” said Christopher Griffin, fashion group president of international business development and president for SOURCING at MAGIC.

He added, “We’re feeling it but we had a lot of China in our show, so I don’t think it was sustainable.”

“It has certainly opened doors for us,” Havemann said. “There’s tremendous opportunity for us from the job growth perspective. Our challenge is lead time, but as the market grows, there will be more the need to go vertical. We already have several U.S. customers as the result of the show.”

Over at the denim exhibit, it was hard not to be impressed by smart jeans that combine Coolmax and Thermaline technologies, which makes them cool in the summer and warm in the winter.

“With new technologies and new chemicals, you can do anything,” said Patricia Medina, with Mexico-based Aztex Trading.

Much of the exhibit focused on sustainable practices, such Jeanologia’s e-flow technology that delivers dye to fibers by nanoparticles, a process that saves 95 percent of water and has no waste.

One such idea was presented by Japanese company Johnny & Jessy that makes shoes with interchangeable soles. Upper and lower parts attach with a zipper.

“We originally created them for business [travelers] so that they don’t have to carry separate pairs on a trip, but in America, people appreciate the unusual design concept,” said Yusuke Ando, the company’s founder.

Japan remains an important market for MAGIC with its PROJECT Tokyo show. Originally launched in 2016, it has evolved into an event developed specifically for that region — thanks, to a big degree, to the new ownership by Informa.

“[Informa has] a ‘think big, act small’ mentality,” Griffin said. “If you’re in the fashion space, you have to be nimble — it marries up nicely.”

He continued, “Informa was completely supportive of what we needed. We changed venues; dates; rebranded the name; shifted from a broad mix of merchandise to very curated, advanced contemporary brands and a lot of premium denim; no Kids and no SOURCING [show sections].”

Griffin said Informa will continue to expand into Asia, pursuing opportunities in China, Korea and Singapore, among other areas.

MAGIC’s summer marketplace will return to the LVCC Aug. 12-14.

MAGIC Fashion Marketplace To Unify Under One Roof
The biannual MAGIC fashion trade show is reinventing itself by offering a new one-stop shopping experience at a single venue, following feedback from MAGIC buyers.  Starting…
Technology is Not Magic
I had the honor of facilitating a Buzz Session at IAEE’s Expo Expo 2020 entitled “Going Virtual” — an apropos name given that this was the first fully virtual Expo! Expo!…
10 Trade Show Mistakes You Didn’t Know You Were Making
1. Not doing your research. Before you sign up for a trade show, make sure it’s the right one for you. Know ahead of time whether the people that will be attending are…
Data Breach Strategies and Technology Trends Were Top-of-Mind at ASAE’s Technology Conference
More than 1,200 association executives, consultants and industry professionals converged at the 2016 ASAE Technology Conference & Expo for three days of networking,…
UBM, Informa in Possible Merger Talks
After UBM’s stock price jumped considerably, news was released that the mega exhibition organizer is in talks to possibly merge with Informa, another mega exhibition…
UBM Confirms in Talks for Possible Advanstar Acquisition
U.K.-based UBM confirmed that it is in talks to acquire Advanstar Communications that “may, or may not, lead to a transaction.” The statement was made after Reuters reported…