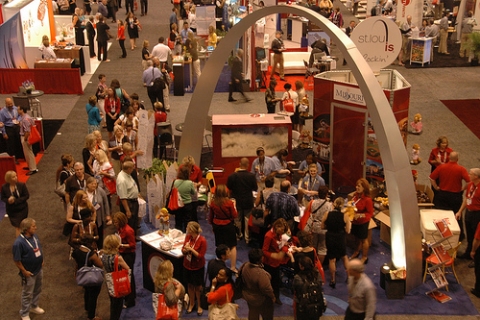 The American Society of Association Executives’ Annual Meeting & Exposition, on tap Aug. 6-9 in St. Louis, attracted 5,400 total participants, which was slightly more than the 5,270 participants that came to last year’s event in Los Angeles.

“We surpassed Los Angeles last year, and we’re really excited about that,” said Kathleen “Kitty” Ratcliffe, president of the St. Louis Convention & Visitors Commission, at a press conference on the meeting’s third day.

There also were 672 booths and 400 companies on the showfloor at America’s Center, which fell short of last year’s 733 booths and 459 companies at the Los Angeles Convention Center.

John H. Graham IV, ASAE’s president and CEO, said at the same press conference that St. Louis was a textbook case on how to bid and execute a meeting. “The buzz at this conference is just tremendous,” he added.

Brian Hall, chief marketing officer for the St. Louis CVC, said that in surveys conducted before the meeting, 67 percent of the attendees had never been to the city or had not visited it in more than 15 years.

“They have fresh eyes coming in with no expectations,” he added. “They are being pleasantly surprised.”

The downtown area of St. Louis, where America’s Center is located and most of the networking events and parties were held, has gone through a major facelift, including a $5 billion revitalization of Washington Boulevard, where the center sits, as well as several hotels being built, Busch Stadium (home of the St. Louis Cardinals baseball team) debuting in 2006 and City Garden, an urban park, also opening up.

“All of these developments have really transformed the community,” Hall said.

The St. Louis CVC put in their bid to host ASAE’s annual meeting five years ago, and now the bureau is just happy to be able to show off all it has to offer in order to capture the attention of some of the association planners visiting the city, he added.

“We see this as a coming out,” Hall said. “It’s a culmination of a decade’s worth of work. It’s an urban renaissance.”

If St. Louis is wondering what the ultimate value is of hosting the meeting, Los Angeles is more than pleased with their return on investment after hosting it last year, according to Michael Krouse, senior vice president of sales for LA Inc., The Los Angeles Convention & Visitors Bureau.

One year later, he added, more than $50 million of business has been booked in the city as a direct result of hosting ASAE. In addition, there is more than $300 million in bookings that are working prospects, Krouse said.

“We are so thrilled a year later to have those numbers,” he added. “I think Los Angeles had an image to dispel, and this was the beginning of the end of old misperceptions.”

IAEE's Midyear Meeting Sees 20-percent Increase in Attendance
Twenty-percent more attendees took advantage of the sessions and networking opportunities at the International Association of Exhibitions and Events’ Midyear Meeting…
Everything is BIG in Dallas – Including ASAE’s Annual Meeting
This week, the American Society of Association Executives wrapped up their annual convention in Dallas on a high note, showing a 12-percent increase in their numbers and the…
SPS – Industrial Automation Fair Guangzhou Sees 14-percent Attendance Increase
The recent SPS – Industrial Automation Fair Guangzhou, held March 7-9 at the China Import and Export Fair Complex in Guangzhou – drew a record number of exhibitors and…
IAAPA Attractions Expo Sees Attendance Uptick
Once a year in the United States, people connected to the amusement parks industry come from far and wide to check out what’s new at the International Association of…
PCMA Annual Meeting Attracts Record Attendance in San Diego
Renewed optimism and enthusiasm appeared to be the overall tenor at the Professional Convention Management Association’s annual meeting, Convening Leaders. Held at…
HD Expo Sees Slight Attendee Uptick at Mandalay Bay in Las Vegas
It's difficult to stay at an average hotel after a trip to HD Expo, the annual gathering for the hospitality design industry that took place May 15–17 at Mandalay…