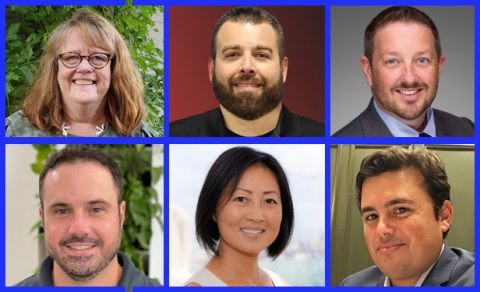 From new leadership appointments to newly created positions designed to grow and expand burgeoning departments, trade show and event professionals are continuing to find new career opportunities as the industry forges ahead toward recovery. Here’s the latest news:

After 20 years with the Boulder Convention and Visitors Bureau, CEO Mary Ann Mahoney will retire on Oct. 15, 2021. Charlene Hoffman, the CVB’s current operations and financial officer, will assume the CEO role on Oct. 16.

A valued leader in Colorado’s tourism industry who has mentored a generation of tourism professionals in her 40-year hospitality career, Mahoney joined the Boulder CVB in 2001, and during her time, transformed the organization into one of the city’s most effective economic vitality contributors. In 2019, she was awarded the Boulder Chamber’s Celebration of Leadership President’s Award of Distinction, as well as the Governor’s Award for Outstanding Individual Contribution to Colorado Tourism.

Since joining the CVB in 2014, Hoffman has played an integral role in advancing its strategic priorities, overall impact and daily operations. She brings more than 25 years of diverse experience in senior level management and ownership roles in sales, marketing, management, business development, finance and business operations to her new leadership role.

Leading business and events technology solutions provider SmartSource, an ABCOM Technology Group company, has appointed Tom Shanley as senior vice president, technology services, responsible for leading the further growth and expansion of the company’s Managed Information Technology (IT) Services. In his new role, Shanley will be directing SmartSource’s team of IT professionals to provide vital services, from help desk support to rapid deployment of equipment and ensuring customer data protection.

Prior to joining SmartSource, Shanley was vice president of information technology with the Greater Nevada Credit Union, where he was responsible for the financial institution’s broad IT operations. Prior to that, he served as senior vice president of professional services at Logically, an IT outsourcing and consulting firm that acquired his former employer, IQ Technology Solutions.

With more than 15 years of association marketing and communications experience, Haller most recently served as senior director of membership and member services at the National Business Aviation Association (NBAA) in Washington, D.C. where he was responsible for growing the association’s membership, expanding membership value and deepening its relationships and engagement with members. Prior to joining NBAA, he served as strategy director for member and component support at the American Institute of Architects.

Global experiential marketing partner GES Events has appointed Eugenio Callejas as director digital technologies. In this newly created position, he will focus on further expanding the company’s digital offerings as events move from virtual to hybrid, and live events include more digital components.

Callejas has been designing experiences since 2001 and brings extensive expertise in digital media, platforms and solutions, as well as deep knowledge of both technological aspects and design, to his new role. He has created enterprise-level applications for Fortune 500 companies including GM, Ford, Toyota, Dell, IBM and Abbott Pharmaceuticals, and is an expert at 3D design, video and motion graphics, as well as various media servers and open web standards.

As the company’s new rental executive, Steve Nancarrow is responsible for business development and client interfacing with professional production companies on the West Coast. Nancarrow previously worked for 27 years at PRG Las Vegas, most recently holding the position of entertainment lighting representative.

Prior to coming to the Louisville CVB, Fong served as vice president of convention sales and services for the Greater Miami CVB, where she worked for 21 years in a variety of sales positions with additional responsibilities overseeing their Washington, D.C., regional sales office. Prior to the Miami CVB, she worked in several Marriott properties and the Biltmore Hotel, all in the Miami area, and has worked with many high-profile groups and national trade shows.

The CVB also recently hired Elizabeth Berry as director of Northeast sales, responsible for Northeast sales territories. She brings an extensive sales background in the meetings and event industry to her new role, including nine years working for the Baltimore Convention Center, most recently as the assistant director of sales.

Based in Baltimore, Berry is responsible for promoting and selling Louisville as a convention, meeting and trade show destination to Washington, Maryland and Virginia area-based national associations, government organizations and corporations. She will also serve as the official representative for Louisville Tourism in the Washington market and act as a liaison between the Louisville DMO, hotels, convention facilities and potential clients.

Video capture and streaming products provider Epiphan Video has appointed Nic Milani as vice president of marketing and business development, responsible for shaping the company’s marketing strategy, product development, customer success and growth. He succeeds David Kirk, who is moving to an advisory role with the company.

Milani brings a history of leadership in a variety of industries to his new role. As director of technology solutions at Herman Miller, he led the development of a workplace technology strategy that produced a patent for the company’s IoT (Internet of Things) smart furnishing. More recently, Milani spearheaded Crestron Electronics’ transition to SaaS, an initiative that earned the company Microsoft Global Partner of the Year for IoT.

People News: Fern, CEIR, MGM, Philadelphia CVB and More Make Hires
See who’s making big strides in their career this month. Have more people news to share? Send it to kogletree@tsnn.com to be included in our next story. Jim Kelley has…
People News: ASM Global, Grip, Little Rock CVB and More Appoint New Leadership, Make Hires
As hope returns to the event industry in the form of smaller trade shows and conventions beginning to resume, event-related organizations are making new hires, promoting team…
People News: MMBC’s New Co-Chair, PCMA’s COO and More Fall Hiring News
From appointments to awards to new hires and promotions, this fall is keeping us on our toes for people announcements. Take a look: Meetings Mean Business Coalition…
People News: Tourism Vancouver’s New CEO, Plus More New Hires and Promotions
Recent job reports from the Bureau of Labor Statistics are dismal, yet the good news is that some companies within the events industry are still making hires and promotions.…
October People News: New Hires and Promotions at GES, Freeman, Spectra and More
This fall has been a busy one for companies in the meetings and trade show business. Take a look. GES announced two major leadership changes this week. Jay Alitzer, who…
People News: Freeman, PCMA, Clarion UX and More Make Hires
Companies within the events and tourism world continued with a flurry of hires in March, showing the economy and outlook for the industry looks strong. Freeman has named a…