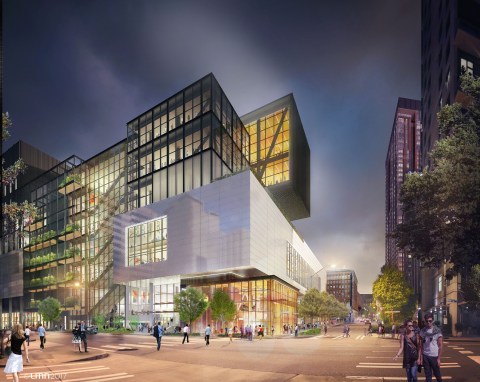 As the industry returns to face-to-face events, rest assured there will be no shortage of spectacular spaces in which to convene. With the array of new and expanded convention centers that have opened this year and are on track to debut in the near future, this seems to be one of the most prolific periods of new construction the industry has seen.

Here are four upcoming convention centers to keep on the radar, all of which are making dynamic architectural and design statements.

The home of the Space Needle knows a thing or two about bringing awe-inspiring icons to its urban landscape, and the upcoming addition to the Washington State Convention Center (WSCC) is no exception.

The Summit, scheduled to open in July 2022, will put Seattle into the next architectural evolution of convention centers rooted in their urban core and supported by a vertically organized flow.

The building will feature approximately 255,000 square feet of exhibition space, 120,000 sq. ft. of meeting space and 60,000 sq. ft. of ballroom space, and design elements will be a highlight of the entire structure.

Wide-open spaces, floor-to-ceiling windows and skylights were designed to bring daylight deep into the event spaces, with expansive views of the city in all directions enhancing the urban nature of the facility. The innovative arrangement of lobbies and exterior spaces aimed to capitalize on opportunities for small gatherings and quiet spaces. Larger spaces featuring soaring ceilings, such as the ballroom and the grand stairway, were designed to allow for improved ventilation. The Hillclimb, a suspended stair and escalator system that provides attendee access from street level to the ballroom level on top, is an iconic design element made of wood and featuring seating elements to enliven the convention experience while providing respite from activities.

With its stacked configuration, the efficiency of the urban site effectively brings interior and exterior spaces together, according to Jeff Blosser, president and CEO of the WSCC.

“The 14,000-sq.-ft. open-air Garden Terrace will be a versatile option for meeting planners, meeting attendees will be wowed by the 58,000-sq.-ft. ballroom with its expansive view of the Capitol Hill neighborhood, and the glass-enclosed Hillclimb along Pine Street has west-facing views of Pike Place Market and the Puget Sound. Simply put, there’s a lot to like about this venue.”

During a recent hard hat tour of The Summit, Denise Begley, director of external events for Microsoft, was highly impressed with every aspect of the venue.

“The thought of how beautiful The Summit building is, how functional the space is and how to move people through it in ways that create opportunities for connecting and learning and showcasing our beautiful city—I can’t help but imagine the great ways the space can be used,” she said.

Another hard hat tour participant, Kelly Saling, vice president of convention sales and services for Visit Seattle, was also wowed by the building and the way it was designed.

“Summit is spectacular!” she said. “Seeing it from inside for the first time, I was really struck by how massive it is. It’s designed for the modern type of gathering, where so much happens outside the classroom, and is thoughtfully appointed to make logistics and execution of events an absolute pleasure."

With the addition of The Summit doubling the capacity of the existing WSCC, Saling is optimistic about the city’s recovery after the pandemic and its ability to continue providing a standout experience for event professionals and attendees.

“Having two buildings to offer for future conventions, both in the heart of our vibrant downtown, will be an incredible and unique asset,” she said. 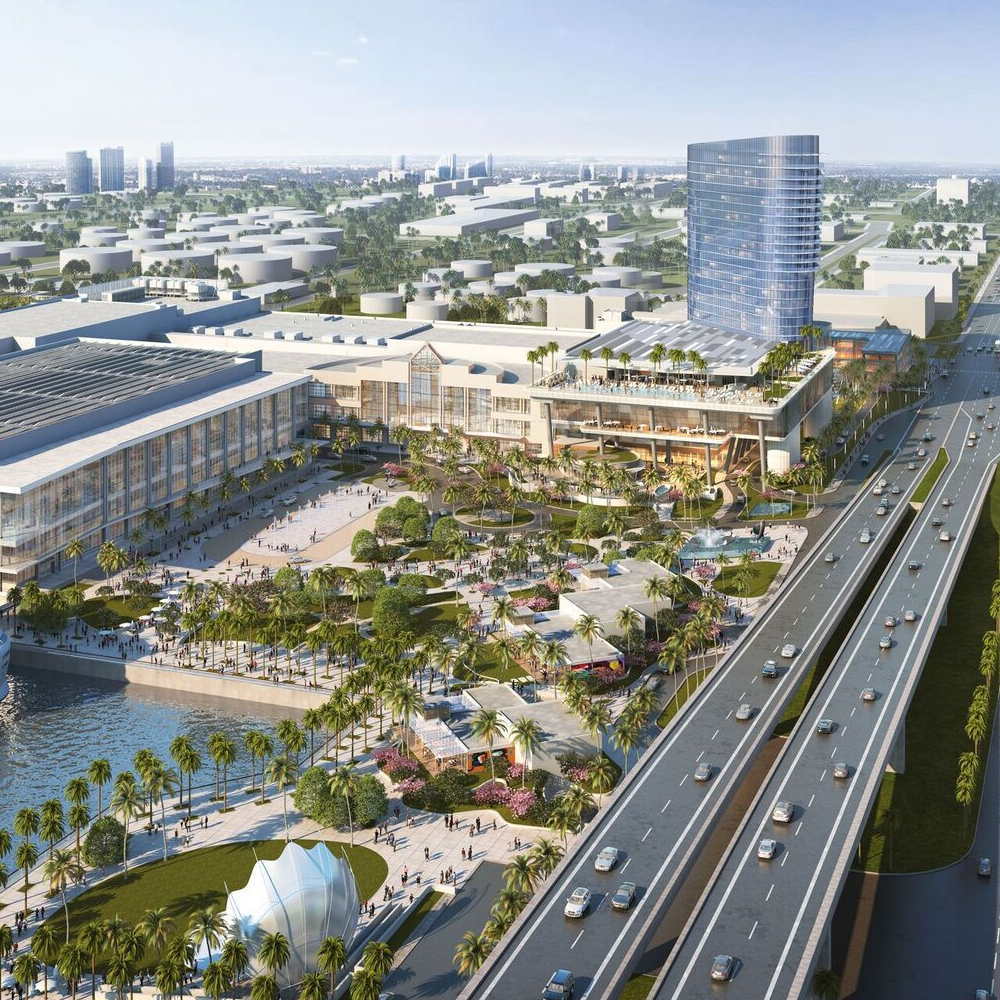 The rays will be glowing a bit brighter in the Sunshine State come Oct. 27, when the Greater Fort Lauderdale/Broward County Convention Center unveils the first phase of its $1 billion expansion.

Phase one includes its newly expanded exhibit hall, featuring 350,000 square feet of contiguous space and opening just in time for the 62nd annual Fort Lauderdale International Boat Show. The full expansion will double the complex’s size, with 1.2 million total sq. ft. of space and a wealth of additional elements to create a vibrant convention center district.

In addition to the new exhibit space, the expansion will eventually include four ballrooms spanning a total of 132,000 sq. ft. of space, including a 65,000-sq.-ft. waterfront ballroom. Total meeting space will measure 215,000 sq. ft. with 50 breakout rooms, along with 220,000 sq. ft. of flexible space and a six-acre outdoor waterfront plaza with restaurants, an amphitheater and lush tropical landscaping to create a park-like atmosphere. On prominent display will be the famous outdoor sculpture, "Sailfish in Three Stages of Ascending" by Kent Ullberg.

The convention center expansion and headquarters hotel projects, both of which will feature the latest technology and sustainability initiatives and be LEED Gold-certified, will be the centerpiece of the full convention center district enhancement project that will include outdoor event space, restaurants, premier shopping, arts and cultural attractions and more.

The project will open in phases over the next few years, with a projected final opening date in late 2025. Downtown Lexington is readying to welcome one of the most innovative and impressive venues ever to be built in the city: the newly expanded Central Bank Center, which has been completely re-envisioned for the future.

Set for completion in January 2022, the $300 million expansion, which is the single largest capital public improvement project in Lexington’s history, was designed to bring fresh vitality to downtown and position the city as a premier convention, meeting and event destination.

“The current facility has served us well for the past 45 years, but the need for more exhibit space has been in discussion since 1994 and recommended by three different studies dating back to 1986,” said Bill Owen, CEO and president of Lexington Center Corporation. “This project, when completed, will really elevate Lexington as a convention destination to a whole new level.”

“We’re thrilled with this new facility,” said Mary Quinn Ramer, president of VisitLex. “The new convention center will allow us to pursue 90% of national meeting business, making us more competitive.”

The expansion also includes many innovative amenities and features that will make the center one the most high-tech, user-friendly and sustainable meeting and event spaces in the region.

The entire development is designed to better connect Rupp Arena and the Central Bank Center to downtown. The parks, plazas and walkways that will weave through the project will create vibrant new public gathering spots for residents and visitors alike. Highlights will include the “Cat Walk,” an exterior stair and gathering place outside of Rupp Arena; the “Gorge,” a new outdoor space at the convention center that also provides outdoor exhibit space; interactive water features; an extension of the Town Branch Trail; and, in the future, Town Branch Park. As one of the most historic, culturally rich, vibrant destinations in the South, Savannah has long been a popular meetings and conventions destination, and it’s about to get even more desirable.

Earlier this year, the Savannah Convention Center broke ground on a $271 million expansion that will double the exhibit hall space to 200,000 square feet and add a 58-foot-wide glass hangar door, a 40,000-sq.-ft. ballroom, 15 additional meeting rooms, more outdoor space, a new entry with an all-glass facade and a 900-space on-site parking garage.

Scheduled for completion in the summer of 2023, the expansion will allow the city to contend for some of the nation’s largest events.

“The expansion of the Savannah Convention Center will open up our city to new and larger prospective meetings, conventions and events that have been too big for us in the past,” said Joe Marinelli, president of Visit Savannah. “Savannah has become one of the top visitor destinations in the country and now will be able to compete for more conventions than ever before.”

Ernest N. Morial Convention Center Reviewing Plans for New Development
The Ernest N. Morial New Orleans Exhibition Hall Authority is moving forward with its $557-million, five-year capital improvement plan. Approved in 2018, the plan includes…
6 Convention Center Updates and Expansions to Watch In 2020
Upping their games to attract more meeting and convention business in an ever-more-competitive market, major U.S. convention centers are busy with renovation and expansion…
Dallas Greenlights Plans for a New Convention Center
The city of Dallas, Texas, will soon have the ability to attract even larger trade shows and other events to its destination. According to Visit Dallas officials, the Dallas…
5 Bold New Convention Center Developments Greet Groups Across the Country
While the pandemic may have sidelined events at convention centers and other venues for a while, several made great use of the downtime to continue constructing new venues or…
Minneapolis Convention Center Unveils New Client Sustainability Reports for 2018
The Minneapolis Convention Center (MCC) has rolled out a new initiative to help event planners understand and minimize the environmental impact of their events: client…
The Javits Center Launches New Online Ordering System for Convention Customers
The Javits Center has officially launched Jake, a new online portal designed to improve the customer experience by simplifying the ordering process of products and services…