The social media platforms of Vision Expo West 2018 reached an all-time high with a double-digit percentage increase across impressions, engagements and video views compared to the year before.

In the 30 days following the Show, reports indicate impressions, engagements and video views climbed up by the thousands, according to show officials.

According to Mitch Barkley, vice president of trade shows and meetings for The Vision Council, by building momentum before the event with targeted social media campaigns, show organizers were able to expand the Show’s social media presence with continual coverage of the daily events and programs that kept attendees involved online and onsite at the event.

“Vision Expo serves a wide variety of individuals within the vision community and we aimed to produce content that would engage the entire industry,” Barkley said. 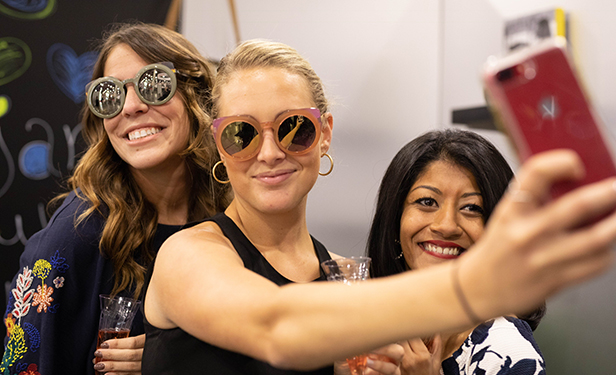 The show also partnered with various social media influencers from the vision community to ramp up pre-Show excitement with personalized advice.

“There are so many exciting new technologies and innovations in ocular surface disease management and myopia control,” said Dr. Lee. “It was a wonderful opportunity to interview the exhibitors at Vision Expo West and to share their latest advances on social media for others to see.”

Vision Expo was also the destination for exclusive events celebrating the energy and effort influencers put into their social media platforms to promote the optical industry.

For example, the first-ever EyeStyle Influencer Event hosted by Sheena Taff of @optician.about.town and Dr. Arian Fartash of @GlamOptometrist, sponsored by Marchon and VSP, gathered 30 social media influencers from the vision community.

In a featured panel discussion, influencers discussed trends and topics that drive their social media efforts as well as their hopes of bringing more eyecare providers into the social networking arena.

“The EyeStyle Influencers Event brought together social media influencers in the vision community that go above and beyond to promote the optical industry,” Taff said. “Social media is so dynamic in today’s world and using it allows influencers to step outside of their day-to-day business to put the eyecare industry in front of the public eye.”

Several social media influencers were also invited by Show organizers to a trip in the High Roller Observation Wheel, located more than 500 feet above the Las Vegas Strip, for an opportunity to network and sample eyewear products provided by members of The Vision Council.

4 Ways to Measure Social Media Success
Social media success involves more than having tons of followers and likes. Significant reach and impressions can be vital ingredients to your social media soup. However, the…
ShowClix Teams Up with Audiencetools to Help Event Organizers Maximize Social Reach
Full-service event ticketing and technology solution, ShowClix, has formed an exclusive partnership with Audiencetools, the Australian-based event marketing platform designed…
Social Media Tips for Trade Show Success
Like so many other spaces in the business world, today’s trade shows are fueled by social media conversations and the buzz they create. Here’s a look at how you can leverage…
EXHIBITOR Magazine Unveils Social Media Marketing Report
The momentum behind the use of social media as a marketing tool is continuing to grow, according to the results of EXHIBITOR Magazine’s 2018 Social Media Marketing Survey,…
Feeding the Social Media Monster – Part One
Whether you are a company or an individual professional, your social media presence or absence drives your visibility and branding. In addition, just planting your stake in…
Vision Expo to Debut a Fresh New Look in March 2020
The Vision Council and Reed Exhibitions are gearing up to present a reimagined Vision Expo, the bi-annual trade show and conference for ophthalmic professionals, next year.…