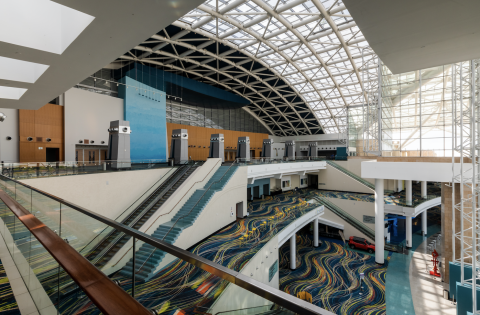 The Puerto Rico Convention Center hosted its first event since achieving GBAC STAR accreditation — the only Caribbean facility to do so — last month. The meeting of the Puerto Rico Chapter of the Association of General Contractors of America (AGC) on Oct. 17 featured a debate among local governorship candidates as well as the organization’s annual convention. More importantly for tourism officials and event organizers, it served as a testimony to Puerto Rico’s ability to produce a safe and successful gathering.

“We hope that our event will serve as an example for other associations and groups,” says Ali Soami Vargas, executive director of the AGC Chapter of Puerto Rico. Vargas says his organization worked closely with the team at PRCC, and that they were very attentive in ensuring that strict health and safety requirements were met at all stages of the project.

“Groups traveling to Puerto Rico should know that the island is putting health and safety first,” says Ed Carey, chief sales officer at Discover Puerto Rico. Carey notes that in addition to the measures put in place at the convention center, Puerto Rico is enforcing new protocols developed by Puerto Rico Tourism Company alongside U.S. Travel Association guidelines such as mandatory face coverings in public, reduced capacities to maintain social distancing and high standards of cleanliness.

Carey points out that the island’s near-perfect weather makes it possible to hold gatherings in a variety of open-air spaces and that a number of the indoor venues have virtual capabilities. “Many of our group venues — whether it be a hotel property, our Puerto Rico Convention Center or the soon-to-open El Distrito T-Mobile (which Corporate Event News first reported on here) — can provide hybrid meeting options,” says Carey.

Travelers entering Puerto Rico must fill out a travel declaration form through the Puerto Rico Health Department’s online portal, get a molecular COVID-19 test (nasal or throat swab) no more than 72 hours prior to visiting the island, and show proof of a negative test or they must quarantine. And because it is a U.S. territory, Puerto Rico’s hospitals and pharmacies adhere to the same federally mandated guidelines as those on the mainland — and there is no need for passport, currency exchange or roaming charges for U.S. citizens.