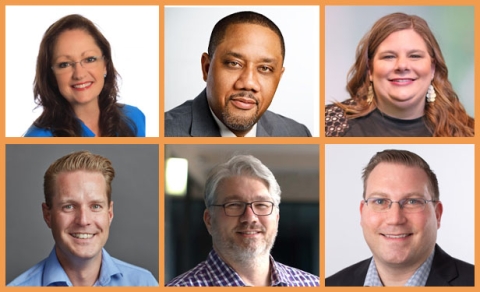 Event-related organizations throughout the U.S. and abroad are continuing to scoop up new team members and elevate executives as the industry-wide hiring and promoting frenzy continues unabated. Check them out!

Following a nationwide search, Visit Seattle and its board of directors have tapped hospitality veteran Tammy Blount-Canavan to be its president and CEO, starting May 9. As Visit Seattle’s first female CEO, she replaces 15-year leader Tom Norwalk, who retired earlier this spring.

With a rich leadership history spanning two countries and three decades, first in the hotel industry in her hometown of Vancouver, B.C., to a previous role as president and CEO of the Monterey County Convention and Visitors Bureau, Blount-Canavan has strong ties to the Puget Sound area, having served as president and CEO of the Tacoma Regional Convention and Visitors Bureau from 2008-2012. During her time at the Tacoma CVB, she also worked to establish and was the first chair for the Washington Tourism Alliance, now State of Washington Tourism.

Most recently, the widely recognized and award-winning industry leader served as executive vice president, principal at Fired-Up! Culture, a business management consulting firm focused on leadership and culture development. She is also a past-chair of Destinations International and worked at Tourism Vancouver in senior management for over a decade.

Leading dry hire entertainment technology equipment rental partner Main Light, LLC has promoted General Manager Randy Mullican to CEO. An employee of Main Light for 27 years, Mullican possesses a deep understanding of the company and has worked closely with Main Light Owner and Chairman Michael Cannon over the past year as the company has made adjustments to its operations and expanded into three locations in Wilmington, Del., Las Vegas and Nashville.

As CEO, Mullican takes the reins of Main Light aware of the need to find the balance of its expanded national presence while maintaining its reputation for efficient, responsive and cost-effective customer service.

IAAPA, the global association for the attractions industry, has appointed Peter van der Schans executive director and vice president of the IAAPA Europe, Middle East and Africa (EMEA) region. Based in the association’s regional office in Brussels, van der Schans will lead IAAPA’s efforts to grow membership, enhance member services in the region and increase participation in IAAPA events including IAAPA Expo Europe.

Bringing more than 15 years of leisure industry experience from a number of attractions including theme parks, zoos and theaters, van der Schans most recently served as general manager of Dierenrijk, a family zoo in Mierlo, Netherlands after holding the role of manager at the Pathé Theatre in Nijmegen, Netherlands, where he helped to grow attendance from 180,000 to 600,000 visitors annually. Prior to that, he was the park manager of Attractiepark Toverland in Sevenum, Netherlands, where he contributed to the strategic expansion of the organization with Avalon and The Magical Valley.

Exhibition and event services provider Fern has made two new hires and a promotion on its management team: Stuart Stapp as general manager of the Kansas City branch; Jason Axtman as general manager in Portland; and Mary Fryer as director, exhibitor services, respectively.

Bringing more than 30 years of experience in the trade show and convention industry to his new position, Stapp has held a variety of roles in the service contractor space. He was the founder of EVNTMGT LLC, where he helped clients in the hospitality, association, event and trade show management industries create positive improvements via streamlined processes and engaging change management.

Also an industry veteran, Axtman has held management roles for a variety of companies in the Portland and Seattle areas. Most recently, he served as the tour and event coordinator for Kenworth Truck Co and prior to that as an assistant general manager for Edlen Electrical Exhibition Services.

Boasting a long background in customer service, Fryer has been leading Fern’s exhibitor services team as interim director for several months and has officially taken on the role. She will lead the company’s efforts to continually improve its level of service and best deliver it to clients and their exhibitors.

As part of the divisional restructuring reflecting his division’s robust growth, Bob McClintock, ASM Global’s executive vice president, convention centers, has elevated two executives who have made a strong impact on the venues they have managed: Kelvin Moore as regional vice president and John Page as regional general manager.

In their new roles, both Moore and Page will work more closely with venue clients and municipal partners across the region to provide customized solutions and innovations while working to solidify and advance ASM Global’s leading position in the industry.

A seasoned and accomplished sales and business development executive, Thomas brings an extensive background to his new role, including senior positions with Universal Studios, Tickets.com and Hookit, and the founding of his own company, CAT Sports, as well as creating the popular podcast, “The Best Boss Ever.”

An entrepreneurial leader with more than 20 years of experience connecting C-level direction to the overall organizational mission through pragmatic, forward-thinking leadership, Little brings a deep expertise creating operational efficiencies and empowering teams to deliver excellence in fast-paced environments within sports and entertainment. She most recently served as managing director, marketing and operations for Raycom Sports, where she worked with global brands including Hyundai, Allstate, State Farm and Old Navy.

One of ASM Global’s venue clients, the Mayo Civic Center in Rochester, Minn., has appointed Paul Jansen as the facility’s new general manager. A service-driven professional with a proven track record in live event entertainment and hospitality, he will work alongside Experience Rochester in driving business to and delivering exceptional customer experiences at the venue.

Bringing more than 25 years of facility management and event execution experience to his new role, Jansen has spent the majority of his career with the Bradley Center Sports & Entertainment Corporation in Milwaukee, where he served in roles including general manager and senior vice president of sales, marketing and business development.

Global experiential marketing agency Impact XM has appointed David Ratcliffe to director of event production, tasked with leading the experiential production and meetings and events teams. Focused on evolving, elevating and expanding event management and production capabilities, he will work to build the agency’s proprietary events niche and drive collaboration between its event production, digital and creative solutions across all client verticals.

Ratcliffe brings more than 25 years of experience in live event production from creative and experiential angles spanning a vast array of industries and sectors, including healthcare, finance and telecommunications. His past roles have included head of event solutions and global director for experiential marketing and event agencies including WRG Live and Touch Associates.

Before joining Exhibit Concepts, Berbach was a client for many years, assisting in managing a 100+ annual corporate trade show event program. Since joining Exhibit Concepts in 2016, she has served as marketing manager and in 2021 was promoted to senior marketing manager, tasked with overseeing the growth of the marketing department to include content marketing, brand guidelines, sales enablement and association relationships.