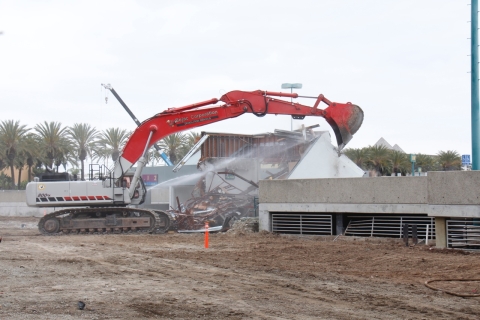 Tom Morton, executive director, Convention, Sports and Entertainment, started the ceremony with a focus on the future, as well as thanks to the many individuals who helped make the expansion possible.

“With this 7th betterment expansion, the ACC will continue to be the largest convention facility on the West Coast,” he said. “This expansion is about the future, in particular, meeting the demands of the future for the shows that continue to grow.”

Anaheim Mayor Pro Tem Lucille Kring remarked on the last ribbon cutting ceremony for an expansion at the ACC. “The last time we took on a project like this was in January of 2000.  And tomorrow, we need to plan the next expansion for the ACC. San Diego, Los Angeles and San Francisco are already nipping at our heels when it comes to meeting and event space, and they will not slow down.  Neither, then, should we.”

“This expansion will push us to over 1 million square feet of convention space,” said Jay Burress, president and CEO, Anaheim/Orange County Visitor & Convention Bureau. “And we already have 14 different shows that have booked into the new space for 2017.  We are also marking this expansion by burying a time capsule that will be opened in 2030.”

It also will support more than 2,000 new jobs in the community to staff the additional space. It is projected to bring in $9 million in additional tax revenue.

Gary Birdsall, vice president, Turner Construction Company, said, “This expansion will bring new and exciting conventions into the new space. And we are setting the standard for convention centers on the West Coast.”

The projected completion date for the expansion is Spring 2017.  For more information, including a video on the new design, please visit accexpansion.com.

Barcelona Convention Bureau Kicks Off Annual Volunteer Day in U.S.
Leaving a destination better than one found it isn’t just a theme that’s been resonating with many events lately – it’s been inspiring some convention and visitors bureaus to…
Los Angeles Convention Center Kicks Off the New Year Right with Fit Expo 2016
This year kicked off right with the LA Fit Expo, where nearly 60,000 expected attendees were on hand to share their love of fitness and health.   The conference and…
Charlotte Convention Center Grows Its Footprint with Completion of $126.9 Million Expansion Project
North Carolina’s Charlotte Convention Center is now ready and able to host larger meetings and conventions, thanks to a $126.9 million expansion project that has added…
LVCVA Board Approves Design Team for Las Vegas Convention Center Expansion Project
The Las Vegas Convention and Visitors Authority Board of Directors has approved a recommendation to retain tvsdesign/Design Las Vegas to provide design services for the Las…
Entertainment Expo Hong Kong Kicks Off in Mid-March
The 12th edition of the Entertainment Expo, organised by Hong Kong Trade Development Council (HKTDC), will open on 14th March and continue through 4th April. The event will…
Global Meetings Industry Day Kicks off Worldwide
The Meetings Mean Business Coalition (MMBC) and leaders from across the meetings industry are joining together today for the second annual Global Meetings Industry Day (#…