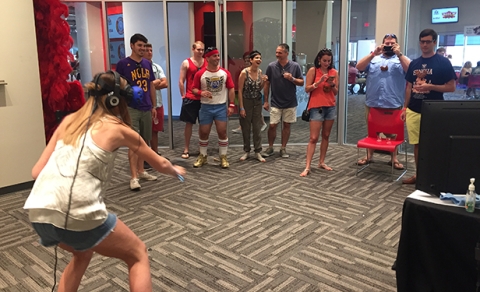 Move over photo booths and gamification – virtual reality could soon be taking the event entertainment world by storm. From exploring underwater worlds and creating large 3D drawings to battling alien spaceships or brain-eating zombies, virtual reality games and experiences at events provide attendees with immersive and engaging experiences that not only help make events more fun, but also more memorable.

Geared specifically toward corporate meetings, conventions, trade shows and private parties, VR Arcade NOLA is a mobile virtual reality entertainment company that offers interactive VR experiences that can be tailored to the preferences of events and their guests.

Based in New Orleans and founded late last year by longtime friends Devin Regan and David Denny, the company works with clients to curate customized and/or branded content designed to enhance the attendee experience.

“Virtual reality creates such a strong, positive memory that guests will immediately associate with that particular event,” Regan said.

He continued, “Everybody’s tried a photo booth, everybody’s played with knick-knacks and games at trade shows and conferences, but VR is something so new and so game-changing, it’s like nothing else you’ve ever tried. That might not be the case in 2-3 years, but right now it’s a truly unique option.”

With a growing portfolio of 30 games and experiences at its disposal, VR Arcade NOLA uses high-end (HTC Vive) VR headsets, cameras and equipment set up on 10x10 spaces, aka “booths,” that enable guests to experience 360-degree, full-motion VR. The set-up includes attendants to assist participants, along with large flat screen TVs at each station so people who aren’t playing can see what the players are seeing through their headsets.

Depending on the size of the event, the company can deploy one or multiple VR booths so everyone has a chance to try out the experiences, which can run between 2-10 minutes. The booths also tend to attract large crowds of bystanders vicariously watching their friends and associates experiencing VR for the first time, according to Regan.

“People enjoy watching it as much as they enjoy playing it,” Regan said. “One of the favorites is probably Fruit Ninja, which is an iPad and iPhone game, where fruit pops up at the bottom of the screen and you use your finger to slice it, and mixed into all these fruits are little bombs.”

He continued, “In the VR version you hold onto these controllers and you’re standing in the middle of this room, which in VR looks like a dojo. You have swords in your hand and these fruits are popping in front of you and you have to slice them. You get people that are very active, just swinging their arms everywhere, so to the crowd it’s hilarious.”

Since launching into the events market last February, VR Arcade NOLA has provided customized VR entertainment for more than 50 events ranging in attendance from 50-3,000 guests, including special events for Red Bull, Microsoft, Yelp and Shell Oil.

Some companies and organizations opt to have the games and experiences personalized with their branding as well as match a specific theme, for example, an underwater simulation for an event at the Audubon Aquarium in New Orleans where users could “swim” through the Great Barrier Reef.

“The main reason that people choose to go with us is not just uniqueness, but also how customizable our experiences truly are,” Regan explained.

He continued, “It seems that right now a lot of planners are doing themed events where they want to incorporate their brand and there are a million ways to do that – that’s the beauty of the technology. There are hundreds and thousands of games and experiences out there, some are really bad, some are really good, and within those, there are ways to customize them all. That’s what our specialty really is: finding and curating content that applies directly to our clients and their guests.”

At the opening party for Connect Marketplace 2017, held Aug. 21-21 at the Ernest N. Morial Convention Center in New Orleans, VR Arcade NOLA partnered with Hosts New Orleans to provide an array of VR games and experiences at the event’s opening party at Mardi Gras World, including a virtual tour of New Orleans where guests could “fly” over Jackson Square and the Superdome as well as a NOLA-themed brass band and jazz music experience.

“Since Connect Marketplace consists of meeting planners, suppliers and experts in many industries such as corporate, association, specialty and sports, it was important to find a VR vendor that was professional, interactive, cutting edge and stimulating so that planners who have already seen it all would stay engaged,” explained Holly Valenti, operations manager for Hosts New Orleans.

She continued, “We’ve used VR Arcade at our smaller corporate events for 50-300 guests, and every experience we’ve had (with them) has been 100 percent positive. Over 1,000 of the Connect attendees took advantage of the VR Arcade experience, and the response was so positive that some guests even came back for a second and third go-round!”

Due to its success in the local market and to meet the growing demand, the company has recently begun to expand its business nationally and has already secured contracts in Houston, Baltimore and Tampa, according to Regan.

“This technology is so new that 99 percent of people haven’t tried anything like it, so what we try to do is create something truly unique that draws eyes,” Regan said.

He continued, “We try to price ourselves accordingly to the other entertainment options out there, so from a price standpoint, if (event planners are) looking for an entertainment option, we’re very competitive with everybody else. Just the uniqueness and the enjoyment factor of trying something new and generating a crowd is probably the biggest appeal we have for these events, and then we also try to capture as many videos and photos as we can with their brand in the background. So, in addition to drawing a crowd and creating a unique event, they get a lot of social media love afterward.”

Update: As of the beginning of 2018, VR Arcade NOLA officially changed its name to Maverick VR in order to reflect its nationwide scope.

“When we first started here in New Orleans, we were focused on understanding and fine-tuning the amazing immersive VR experiences that high-end VR equipment can provide for New Orleans events, but we quickly out-grew the local market, necessitating a less location-specific company name,” Regan explained.

He added, “We are proud to keep our headquarters in New Orleans while still being able to offer VR activations for conferences and private events throughout the U.S. and excited to see our continued growth as Maverick VR.”

Meet AC Launches Immersive Virtual Reality Experience for Event Planners
Meet AC has unveiled a new virtual reality experience that allows prospective visitors and event planners to experience everything Atlantic City’s convention scene has to…
Virtual Event Lessons for Healthcare and All Industries
Right now, health is on everyone’s mind, personally and professionally. While we don’t know how long this disruption will last, we do know this: the healthiest way to deliver…
Virtual Reality in Event Planning – A Competitive Advantage for Venues
We work with a host of clients, helping them bring sometimes massive spaces at a single location or distributed over the globe into the digital world. The technology enables…
Salt Lake Sees Demand for Meetings of all Sizes
A financial incentive program created by the Utah Office of Tourism paid off with the booking of 30 events to be held in Salt Lake City in 2021. Visit Salt Lake projects that…
Meet AC Expands Its Virtual Reality Experience Platform
In January of this year, Meet AC unveiled a new virtual reality (VR) experience that enables event planners, brands and prospective visitors to experience everything Atlantic…
5 Tips for Creating an Engaging Immersive Event
When was the last time you attended a great company event? For many people, it was at least a year and a half ago, before the global pandemic and resulting lockdowns took…