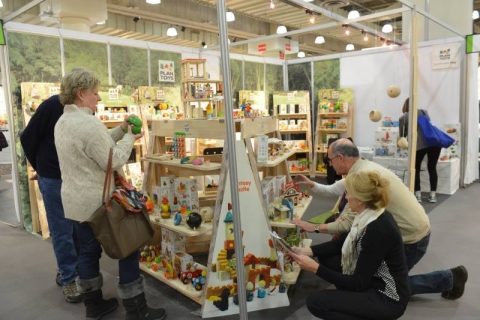 Emerald Expositions’ 2015 edition of NY NOW, the Market for Home, Lifestyle + Gift, to be held Aug. 15-19 at New York City’s Jacob K. Javits Convention Center, will have a record-breaking amount of new exhibitors.

The summer market also will feature the largest to date edition of Artisan Resource, now in its fourth year alongside NY NOW.

A record 632 exhibiting companies – of the market’s total 2,600-plus – will be new to the summer Market.  Of these newcomers, nearly 400 are first-time market participants, and 230-plus are returning to NY NOW, following an absence from the NY Market.

“The chart-busting interest from companies new and returning to NY NOW is a testament of the Market’s importance to suppliers who want to connect with buyers from across the United States and from around the world,” said Randi Mohr, NY NOW co-director and vice president.

Mohr added, “NY NOW is currently at 97% capacity, and with this week’s addition of a second New Exhibitor Pavilion, we expect that continued demand from new companies will result in a sold-out summer Market.”

New exhibitor has been in such demand the initial pavilion sold out and a second one was added, according to show organizers.

In addition, there will be the biggest ever edition of Artisan Resource, a first-of-its-kind market offering U.S.-based volume importers, direct import retailers, designers and wholesalers the opportunity to meet with international artisanal producers.

A record 155 exhibitors from 33 countries, including 99 newcomers spread over 9,500 square feet, are part  of what will be Artisan Resource’s largest show yet.

In addition to these concentrations of newcomers, NY NOW will showcase nearly 250 returning exhibitors in its three collections and 10 sections this summer. .

Besides the showfloor, attendees can take advantage of education that will include social media marketing, visual merchandising, tax preparation, demographics analysis and importing advice, to name a few.

Record-breaking Number of Exhibitors at UBM Jewellery Event
Last week, the 36th September Hong Kong Jewellery & Gem Fair (September Fair) opened with a record-breaking number of exhibitors. It featured more than 3,700 exhibitors…
Eco Expo Asia 2016 Closed with Record-breaking Exhibitor, Visitor Numbers
Eco Expo Asia 2016, held Oct. 26-29, closed amid great acclaim with record-breaking exhibitor and visitor numbers. The Expo was jointly organised by Messe Frankfurt (HK) Ltd…
Record-breaking 85 Countries Take Part in Global Exhibitions Day (#GED18)
Exhibition professionals around the world came out in record numbers for the third Global Exhibitions Day (GED) June 6. Not only did this highlight the industry’s role as a…
Record-breaking 112 Trade Show Professionals Take Part in #ExhibitionsDay on Capitol Hill
For the fourth year in a row, the International Association of Exhibitions and Events spearheaded #ExhibitionsDay, held June 6-7 in Washington, D.C., at which 112 trade show…
Record Number of Exhibitors Headed to bauma CHINA
The “who’s who” of the industry will be there when bauma CHINA opens its doors again from Nov. 27-30 in Shanghai. More than 3,300 companies will present themselves at Asia’…
Automechanika Shanghai 2014 Draws Record Number of Exhibitors
Automechanika Shanghai 2014, Asia’s largest trade show for automotive parts, accessories, equipment and services, will have a record number of exhibitors this week at the…