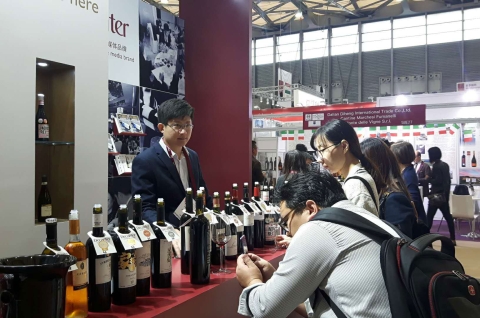 The 5th edition of ProWine China, International Trade Fair for Wines and Spirits, set new records and confirmed its status as the most international event for this industry in mainland China.

The trade fair attracted 14,219 trade visitors - an increase of 14.3 percent, compared with the 2016 staging. This year, about 700 exhibitors from 39 nations presented their products within 16 country pavilions and 4 regional pavilions.

The number of local exhibitors grew by 30 percent, compared with last year, reflecting the upward trend on the flourishing Chinese wine market.

Marius Berlemann, Global Head Wine & Spirits and Director of ProWein, commented: “ProWine China 2017 saw significant growth in the number of local and international wine producers and suppliers, reflecting the country’s continued evolution towards one of the largest markets for wines and spirits globally. The Chinese wine business is currently experiencing a shift in demand, away from only brands and pricing towards other elements including country and region of origin, grape variety and cultivation methods. Opportunity continues to increase on China’s maturing wine market, achieving sustained growth every year. At the same time, Chinese consumers are eager to discover wines from all parts of the world.”

“Over the three days, Shanghai is transformed into an exhibition of unimaginable dimensions. We had visitors coming from all corners of China. Some even came from very distant provinces, such as Liaoning and Yunnan,” added Paul March, Managing Director at UBM Allworld.

Exhibitors and visitors were very pleased with their participation in ProWine China 2017.

“The size of the exhibition is growing and there are many new brands with many new countries participating. I see the biggest change in the quality of visitors – we all see not only highly professional visitors, but visitors who know exactly what they are looking for. They are not just interested in price, but actually ask for specific varieties and styles. They are putting a lot of thought into the distribution plan and how to purchase,” stated Michaela Stander, Marketing Manager, Wines of South Africa.

“I have a good impression of the three-day exhibition and I am quite satisfied with the national pavilion of each wine country. I found several American wines on the first day and paved the way for initial cooperation. It saved us a lot of time when choosing wine. This show is the highest quality wine trade fair I have ever attended domestically. We will definitely be back next year,” said Yu Wang, General Manager of a wine importing company from Shaanxi province.

Jude Mullins, WSET’s International Development Director, remarked: “One thing I noticed is the increased level of knowledge and understanding of wines and spirits among visitors. We launched the sake program in China last year and had a great response to the sake master class with lots of people excited to learn more. We try to allow our educators to choose the subject because they are at the forefront of what’s happening on the Chinese wine market. They know what’s trendy and what’s coming next. These aspects were reflected in our master classes this year.”

The Industry Forum at ProWine China 2017 was held with the theme "Understanding Chinese Wine Consumers", featuring wine expert Li Demei who is one of the "World's Top 10 Most Influential Wine Consultants”.

“The maturing Chinese wine market needs professional wine education and training. Only by doing this will consumers gain clear direction: knowing what they do and do not like. This is why education is so important. This year’s atmosphere has been very lively, especially in terms of participation at the various master classes and forums,” reported Li Demei. Six other speakers participated in the Industry Forum: Prof. Larry Lockshin from the University of South Australia, Zeng Lishi, a researcher from Australia’s Ehrenberg-Bass Institute and Germany’s Geisenheim University, Li Shiyi, Deputy General Manager at COFCO, Dr. Sun Jian, Director of Changyu Group and Deputy General Manager at Changyu Limited, Xu Wei, Co-founder of Aroma Republic as well as Dr. Li Ruyi from the Wine Institute of Ningxia University. In addition, Wine 100 presented a distributor forum on the topic of “Retail 3.0 Remodeling Chinese Wine Market”.

Strong International Participation at Prowine China 2016
The 4th edition of ProWine China, International Trade Fair for Wines and Spirits, recently concluded successfully in Shanghai: 12,431 trade visitors - an increase of 20…
ProWine China 2015 Attracted 10,300 Attendees to Shanghai
The recent staging of ProWine China 2015, International Trade Fair for Wines and Spirits, in Shanghai drew around 600 wine and spirits producers from 33 countries presented…
20 Percent Exhibit Space Increase at PROWINE CHINA 2015
Due to increased exhibit space demand, ProWine China 2015 will occupy 2 exhibition halls, increasing the exhibition area by 20 percent, compared with the show’s last staging…
Darren Guo Takes the Lead at NürnbergMesse China
NürnbergMesse China officially has been under new management since July. Darren Guo, already interim managing director since March, now will occupy the position permanently…
KLCC Confirms 30 Major Events in 2018
The Kuala Lumpur Convention Centre (KLCC) reports that it has already confirmed some 30 major high-profile events in 2018. It is expected to attract close to 440,000…
UBM Confirms in Talks for Possible Advanstar Acquisition
U.K.-based UBM confirmed that it is in talks to acquire Advanstar Communications that “may, or may not, lead to a transaction.” The statement was made after Reuters reported…