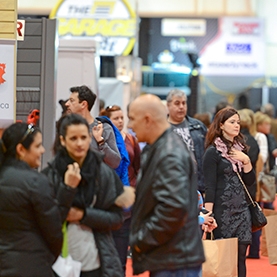 The company also announced the launch of six new shows in the 2016-17 show season, including shows at the new U.S. Bank Stadium in Minneapolis, Minn., and Music City Center in Nashville, Tenn.

"It’s a very exciting time for Marketplace Events," said Tom Baugh, Marketplace Events' CEO.  "We are well positioned for growth, and under Sentinel’s ownership, we are able to be more aggressive in acquiring and launching shows in the home improvement sector."

The Calgary acquisition, to be renamed the Calgary Renovation Show, will take place Jan. 13-15 next year at the BMO Centre.

It will be the third home show in the market operated by Marketplace Events, which also produces shows in February and September at the same facility.

She added, "We know the show and our members will be in good hands with Marketplace Events, a top producer, whose standards of excellence mirror our own. The multi-day event served our members well, however, those companies which took advantage of the marketing opportunities Homexpo provided will benefit further from working with North America's largest home show producer. It is the primary focus of their business."

The six launches include four markets where the company already operates and two shows in new markets, including Nashville and Richmond, Va.

The four in-market launches include two events at the new, state-of-the-art U.S. Bank Stadium, home to the Minnesota Vikings, to be completed in July of this year.

The all new Minneapolis Home + Remodeling Show will run annually in January starting in 2017 and a Holiday event will take place in November on the stadium’s concourse level.

"We are excited to expand our footprint in all six of these terrific markets.  In particular, the Music City Center and U.S. Bank Stadium are extraordinary new structures where competition for show dates is intense,” Baugh said. “Marketplace Events is honored to have been selected by these venues to produce major Q1 shows.”

In the last two years, Marketplace Events also completed three acquisitions: two home shows in Winnipeg from the Manitoba Home Builders’ Association (MHBA) in 2015; two shows in Raleigh, N.C., from American Consumer Shows (ACS) in 2014; and a show in Edmonton, AB from Young Marketing Services in 2014.

In all, the company now produces 47 shows annually in 23 markets including: 31 home shows in the US, 14 home shows in Canada and two Holiday Boutiques.

Marketplace Events Buys Six More Home Shows for Fast-growing Portfolio
Marketplace Events continued to expand its fast-growing home shows portfolio with the purchase of six more events from Southern Shows All events in this transaction are…
5 Budget-Friendly Ways to Plan More Sustainable Events
Feeling powerless to make your events more sustainable? Want to make your events greener without having to ask your boss for permission or spending more money?  In her…
Urban Expositions/Clarion Events and Marketplace Events Launch Shows
Two major trade show producers plan to launch a slew of new business-to-business and consumer shows this year. Urban Expositions/Clarion Events is gearing up to unveil…
Social Tables Launches Free Event Planning Tools
Social Tables has released a free version of its Event Planner Essential, a digital platform that helps organizers and planners bring events to life while allowing them to…
Marketplace Events Gears Up to Launch New Home Shows In Houston
Consumer show producer Marketplace Events is growing its Texas footprint with the launch of two annual home and garden shows in Houston. Set to debut Feb. 11-13 and Oct. 21-…
Marketplace Events Continues to Expand with Buy of Casa Latina Home Expo
Marketplace Events already has bought several events this year to add to their portfolio, and now they have scooped another one for the rapidly expanding Hispanic market –…