IAAPA Providing Innovation and Fun for Nearly a Century 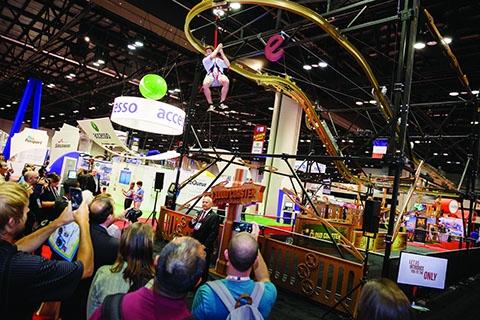 In early 1917, a few amusement park and other outdoor entertainment representatives gathered at the Congress Hotel in Chicago with the goal of establishing an association for the industry. The following year, the National Outdoor Showmen’s Association (NOSA) was officially formed.

When exhibits first appeared at the second Annual Convention, there were only three manufacturers featuring new amusement devices. But the following year, there were 45 exhibits and the trade show element was official.

During those early years, the convention moved around to various hotels within Chicago, the Pennsylvania Hotel in New York City, and the York and Royal York hotels in Toronto. The name changed to the National Association of Amusement Parks (NAAP) in 1920.

The association and its annual event weathered the economic storm during the Great Depression, even as the number of parks was dwindling. As World War II got underway, association leader Alfred R. Hodge expressed the relevance of amusement parks: “It has long since been proved that perhaps the finest antidote for fear is fun, and that is our business … Fun is a gloom chaser; fun drives out discouragement and despair; fun pushes aside pessimism.”

After the war, the baby boomers fueled an upswing in park attendance during the early 1950s. Disneyland led the industry rejuvenation with themed amusement parks. And so the 1956 meeting was held at Disney’s California park.

By the time NAAP reached the half-century milestone in 1968, amusement parks had changed dramatically from outdoor groves to the imagination-driven theme parks of the modern era.

In 1972, in response to another industry shift, the name changed to the International Association of Amusement Parks and Attractions (IAAPA), and membership broadened to include waterparks, family entertainment centers, and other attractions during the 70s and 80s.

IAAPA’s 1986 Annual Convention and Trade Show in Orlando drew more than 13,000 attendees – nearly double attendance from just five years before. During that time, amusement parks were also spreading into Asia, South America, and the Middle East, broadening the audience even more.

During the mid-1990s, membership expanded once again to include zoos, aquariums and museums. A Summer Meeting was also launched in Hong Kong.

In 1995, IAAPA partnered with Give Kids the World (GKTW) as the association’s official charity, with members donating gifts, toys, equipment and supplies. In addition, member facilities provide complimentary admission to their parks for GKTW children.

“They attend IAAPA Attractions Expo looking for the next business-changing idea and the trade show floor is filled with thousands,” Mangone said. “The innovative and creative minds at the manufacturer and supplier
companies bring with them the latest in rides and slides, intricate theming, more efficient ways to queue, interesting merchandise, challenging midway games, tasty food and beverages, and much more.”

“The success of the show really speaks to the importance and value of family entertainment,” said Mangone. “Friends and families gather at amusement parks and attractions to enjoy time together and they come away with lifelong memories. The need for those shared family entertainment experiences is evergreen. Making people happy and putting smiles on our guests’ faces is what our industry is all about. There’s much more need for that now than ever before and that demand drives what we do and the longevity of our expos.”

IAAPA Providing Innovation and Fun for Nearly a Century
In early 1917, a few amusement park and other outdoor entertainment representatives gathered at the Congress Hotel in Chicago with the goal of establishing an association for…
Visionaries Paved the Way for CONEXPO-CON/AGG a Century Ago
When the first CONEXPO was held in 1909 in Columbus, Ohio, the entire show (known then as the Road Show) covered 40,000 square feet — the size of some single exhibits at…
Beacons Provide Opportunities for Enhanced Attendee Experience
By Elizabeth Johnson What if you had a tool that helped attendees navigate the showfloor so they can find exhibitors more easily; one that helped attendees connect with each…
Top Criteria for Selecting an Event Technology Solution Provider
Exhibitors and sponsors invest significant resources – financial and human capital – to make their presence at leading trade shows and conferences a success. In fact, event…
IAAPA Leadership Conference 2018 Held for First Time in Japan
The International Association of Amusement Parks and Attractions (IAAPA) recently concluded its eighth annual IAAPA Leadership Conference, held for the first time in Japan,…
HANNOVER MESSE USA Nearly Doubles Space for IMTS 2018
HANNOVER MESSE USA, the newly branded North American industrial technology trade shows collocated at IMTS 2018, will feature 130,000 square feet of exhibition space and…