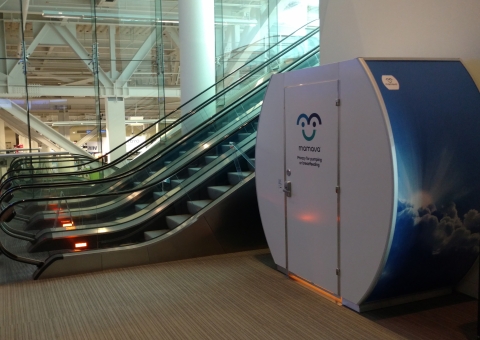 Nursing mothers now have a couple of private sanctuaries to retreat to when attending conventions and meetings at the Huntington Convention Center of Cleveland.

The SMG-managed facility has installed two portable lactation suites for female attendees and exhibitors wishing to breast feed their infants or use breast pumps in privacy.

“We are offering the new lactation suites during conventions, meetings, and trade shows to offer comfort and convenience for our guests,” said Mark J. Leahy, general manager of the HCCC.

He continued, “Young mothers have had to utilize public restroom spaces or find a private space in the Convention Center, which is often difficult during a large convention or trade show with thousands of attendees and exhibitors. The new lactation suites create a private place within a public environment, enhancing our amenities for women and families.”

Created by Mamava, a Vermont-based company that designs solutions for nursing mothers on the go, the portable lactation suites are self-contained mobile pods that include benches, an electrical outlet and a door that can be locked for privacy.

Measuring 4 x 8 feet, the suites are designed for one person at a time but also provide enough space to simultaneously hold mom, infant, breast pumps and luggage.

New mom Brittany Wire Gloer, director of supplier relationship solutions at PartsSource was thrilled to have access to the lactation stations while attending the UBM Advanced Design in Manufacturing Expo at the HCCC.

“I was concerned about what I was going to do when I got to the conference, so I called the convention center ahead of time to find out if they had a private area where I could nurse and was told they had recently installed a couple of dedicated areas,” Gloer said.

She added, “I was pleasantly surprised by the lactation pods and how private and clean they were. I wish every convention center had this type of convenience for nursing moms.”

As the first wave of convention centers to incorporate such spaces, the HCCC is the second SMG facility to install lactation suites, preceded by the Philadelphia Convention Center, which introduced one in late 2015.

“Until now, women have often had to pump milk in the bathroom while they are away from their babies working a trade show or attending conferences if the show planners haven’t designated a space,” explained Sascha Mayer, co-founder of Mamava.

She added, “We believe that all mamas deserve a private, clean and comfortable place to use a breast pump or breastfeed – anywhere, anytime. Mamava pods provide flexibility for facilities and easy access for moms.”