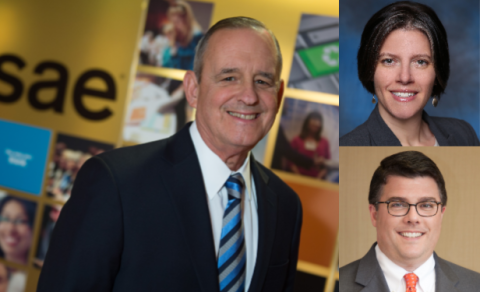 Three association professionals will be honored for their exceptional leadership qualities and commitment to advancing the associations community. ASAE will posthumously bestow its 2020 Key Award to past president and CEO, John H. Graham IV, who passed away in January of this year. In addition, Vetted Solutions President James J. Zaniello and Rhea M. Steele, chief of staff of School Nutrition Association, will be presented with the Academy of Leaders Award and the Professional Performance Award, respectively.

The awards will be presented during the 2020 ASAE Virtual Annual Meeting & Exposition, set for Aug. 10-12.

“On behalf of the committee, congratulations to the 2020 Individual Honors recipients,” said Christie Tarantino-Dean, CEO of Institute of Food Technologists and chair of ASAE’s 2020 Awards & Recognition Selection Committee. “During these challenging times it is important to shine a light on the positive impact that our colleagues have made, not only in their volunteer work with ASAE, but throughout the association community.”

As the first association executive to be posthumously honored, Graham IV is the 71st recipient of the Key Award, which honors association CEOs demonstrating exceptional qualities of leadership in their association while displaying a deep commitment to voluntary membership organizations.

Prior to his death, Graham served as ASAE’s executive leader for more than 16 years. Before his position with the association, he was an active volunteer and served as an ASAE board member from 1994–97, a member of the ASAE Research Foundation board from 2000–2003, and chairman of the Foundation Development Committee (2002–2003) and the Key Philanthropic Organization Committee (1996–97). Since becoming an ASAE member in 1988, Graham served on several other committees and was also known for his dedication to promoting ASAE’s Power of A initiative as well as supporting diversity, equity and inclusion programs and legislation.

“The Awards and Recognition Committee is taking action to support John’s diversity, equity and inclusion legacy along with ASAE’s ongoing efforts by taking steps to create a more transparent and inclusive awards program,” said Matthew R. D’Uva, CEO of American Association for the Study of Liver Diseases and vice-chair of the 2020 Awards and Recognition Selection Committee. “The goal of these changes is to create a pool of applicants that reflects the diverse makeup of the association community.”

Zaniello is the 33rd recipient of the Academy of Leaders Award, granted to consultants or industry partners who have demonstrated exemplary support of ASAE and the association community. He served as chair of the ASAE Political Action Committee (2001–2003), chair of the Foundation Development Committee (2011–2012), and has been active on several other ASAE committees since 1997. Through his professional work, Zaniello has collaborated with the Florida Society of Association Executives to produce a diversity and inclusion-focused research study, and with the ASAE Research Foundation team to compile data for a study examining the use of Interim CEOs and Executive Directors.

Steele is the 46th recipient of ASAE’s Professional Performance Award, which recognizes invaluable contributions made by association executives who are not CEOs but are at the top level in their organizations. As an active volunteer since 2011, Steele served as vice-chair (2014–2015) and chair (2015–2016) of the National Capital Area Advisory Council. She has been a member of the Gold Circle Awards Committee and the Technology Professionals Advisory Council, and was recently appointed to the Certified Association Executive (CAE) Commission. To help advance the association profession, Steele also leads prospective CAE candidates through the ASAE CAE Exam Kickoff Course and is a co-founder of the Association Women Technology Champions group.