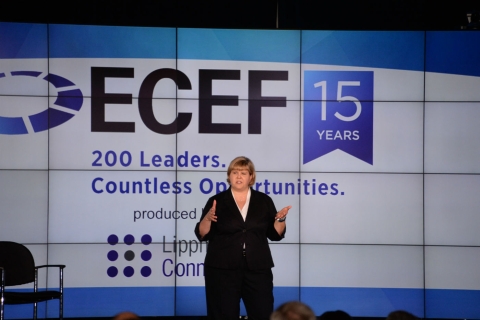 More than 220 attendees, which included top-level association and for-profit executives from companies worldwide, gathered June 1 at the JW Marriott in Washington, D.C., along with 37 sponsors, eight media representatives and seven meeting and trade show industry associations, to network and learn about the latest trends.

In addition, the event was celebrating its 15th anniversary, which was highlighted with a video that included keynotes from past years.

First up for a full day of sessions that kicked off bright and early was Karen Chupka, senior vice president, CES and Corporate Business Strategy, Consumer Technology Association, who talked about how CES has had to grow during the years with the industry it serves.

Chupka said CES has grown 33 percent in just the last eight years, which has included expanding the show to include product categories such as cars and wearable technology.

Some of the keys to CES’ growth, she added, was they always strove to keep the CES brand’s promise of producing a worldwide marketplace for consumer electronics; making sure to empower the show’s team to being in new business; and look at launching new areas, such as the show’s Eureka Park for start-up companies.

“This area generates arguably the most buzz of our show,” Chupka said.

The next session was an eye opener, with Randal Acker, president and COO of EXHIBITOR Media Group, talking with three exhibitors about how to make their experience better and more rewarding on the showfloor.

One of the pain points discussed was about exhibitors having more access to data.

Diane Benson, American Exhibits Leader of GE Healthcare, said, “We are making an investment (at the show), it feels like we should have access to the data there too.”

The panel said at times, they have not been given access to something as simple as job titles of people who might be on the showfloor.

Another issued discussed was the length of time it to receive the leads captured at the show, as well as who owned them.

Most of the audience when polled said that leads were owned by both show organizers and exhibitors.

Sometimes, though, shows were taking from 48-72 hours to deliver leads back to the exhibitors.

Acker also polled the audience on how many in the room have an Exhibitor Advisory Council. Of which 34 percent said they did. “If you’ don’t have an EAC,” Acker said. “Shame on you.”

Rob Mesirow, who ran CTIA Wireless for several years before recently taking a new position at PricewaterhouseCoopers, talked with the audience next about how most major companies are “worried about disruption in their industries and not knowing where it will be coming from.”

He also discussed the Internet of Things and how in any given day someone just walking around with their phone, for example, could hit between 5,000 and 10,000 data points.

“Data will rule the world, and he who can control it and interpret it, will win,” Mesirow said.

Lippman also presented findings from The Pulse survey that was sent out and answered by show organizers.

Here are the top three issues show organizers identified that they faced:

The average spend on attendee marketing per company, Lippman said, was just more than $300,000 and average cost per attendee was $32,16.

“I (do) think the traditional showfloor will look quite different (in the future),” Sexton said. She added that shows already have education stages and demo areas spread throughout, instead of tucked away in meeting spaces.

Loechner said that show organizers “need to curate the experience better, rather than have a mass gathering” adding that “customers what something more experiential in tradeshows.”

Poss reminded everyone in the room that “all we really own is the database and the goodwill of our customers.”

McCurdy also said that he thought our industry should and could be evolving more. “I’m surprised how much it has not actually changed with technology,” he added.

The last educational session of the day was a keynote given by Frank Supovitz, president and chief experience officer, Fast Traffic Events & Entertainment.

Supovitz discussed his time as senior vice president, Events for the National Football League, overseeing the Super Bowl, Pro Bowl, and the NFL Draft, which included developing a fan experience during the Super Bowl’s Media Day and dealing with the power outage that occurred during the 2012 Super Bowl.

When the power started going out around the stadium that day, he said he learned several valuable lessons.

Panic will paralyze decision-making. Supovitz showed a clip of a “60 Minutes” TV crew who happened to be filing the control room that day and even in the midst of the chaos, everything was very calm.

Also when the power started to fail, the staff quickly turned off anything still drawing power, which likely saved the venue from a catastrophic blackout. “As a leader, you have to trust a specialist to do their (work),” Supovitz said.

Next year’s ECEF will be held May 31 at the JW Marriott in Washington, D.C.