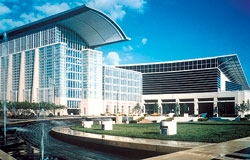 The completion of this transaction comes eight months after the companies announced the proposed merger. Onex, of which SMG is a portfolio company, and AEG’s subsidiary are now equal co-owners of ASM, according to ASM officials.

Headquartered in Los Angeles, with key operations based in the Philadelphia suburb of West Conshohocken, ASM has corporate offices in London and Manchester, England; Brisbane, Australia; and Sao Paulo.

“This marks the beginning of an exciting new chapter in our industry and one that will establish a new standard of excellence in managing live experiences,” Newman said.

He added, “Bringing together the combined global expertise of each company with the best content and cutting-edge technologies, we will be able to realize the full potential of the world’s greatest spaces, places and events, create amazing experiences for guests, offer exciting new opportunities to employees and deliver the highest value for all stakeholders.”

Meanwhile, Wes Westley, former CEO and president of SMG, has joined ASM’s board of directors and will focus his efforts on key strategic growth initiatives and ensuring a seamless integration of the two companies.

“I am very proud to have had the opportunity to lead such an incredible organization as SMG,” Westley said. “We have a long history of working closely with our public and private partners and are confident in our ability to continue to meet and exceed their expectations.”

He added, “ASM’s focus moving forward will be on providing added value and best-in-class services to its customers. We are well-prepared for a seamless integration process.”

With the completion of this merger, the new ASM Global now boasts 61,000 employees around the globe.

AEG will retain ownership of its real estate holdings outside of this venture, including its entertainment districts and owned venues in Los Angeles; London; Berlin and Hamburg, Germany, as well as its extensive development, sports, music and sponsorship divisions.

Two Mega Venue Management Companies – AEG Facilities and SMG – Set to Merge
AEG Facilities, the venue management subsidiary of AEG, and SMG, an Onex portfolio company and venue management company, have signed a definitive agreement to merge. This…
RSCVA Taps SMG to Manage Reno-Sparks Event Facilities
The Reno-Sparks Convention & Visitors Authority (RSCVA) Board of Directors has appointed global entertainment and convention venue management company, SMG, to oversee…
People News: Moves at Reed Exhibitions, ASM Global, KBIS and More
From presidents and board of directors to fine-cuisine-minded appointments in the Midwest, here’s the latest news about professionals in the trade show industry that you need…
International Market Centers and AmericasMart Finalize Merger
International Market Centers (IMC) and AmericasMart Atlanta have completed an agreement to create world’s largest owner and operator of top-tier permanent showroom space for…
Anaheim Convention Center Becomes First West Coast Convention Facility to Receive GBAC Accreditation
The Anaheim Convention Center became the first convention center on the West Coast to receive the Global Biorisk Advisory Council (GBAC) STAR accreditation. “This is an…
Become an Agent of Change
What does being a “change agent” mean to you? Odds are, you already are one even if you don’t realize it! With 2020 being a pivotal year for us all, shift happened in a big…