Making a Positive Impact is Par for the Course at NACS This article is the first in a series that TSNN runs throughout the holiday season shining a bright, well-deserved spotlight on event companies that are #GivingBack to make a positive impact in their host and home communities.

Often, trade show-related organizations and companies that incorporate corporate social responsibility do so for different reasons – to elevate their PR profile, to increase employee engagement, for purely altruistic reasons or a combination of all three. But for those organizations that attempt CSR, one thing often becomes incredibly clear: helping those in need and all the “feel good” emotions that come with it can be incredibly addictive, so much so that giving back often ends up becoming an integral part of a company’s culture.

Such has been the case for the National Association of Convenience Stores, the organization that serves the U.S. convenience and fuel retailing industry, which embarked upon its CSR path five years ago in an effort to help raise the profile of the convenience store industry with consumers and the national media, according to Carolyn Schnare, director of Strategic Initiatives for NACS.

“However, along the way we learned that we really can help our retailers do a lot of good within their communities by identifying national charities, developing partnerships and connecting them with convenience store companies.” Schnare explained.

She continued, “We were the first retail membership association to formally partner with the American Red Cross and Keep America Beautiful and informally with Feeding America, Share Our Strength, Children’s Miracle Network, DHS Blue Campaign and National Safe Place, just to name a few.” 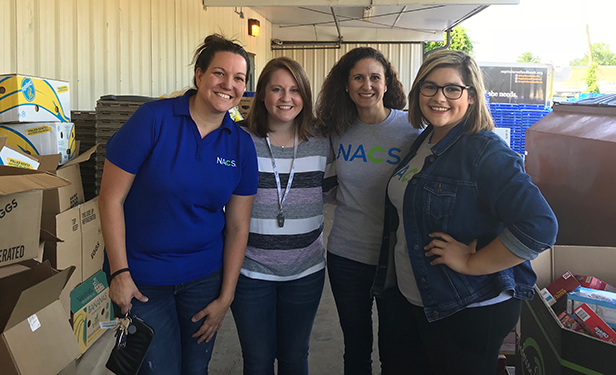 This momentum toward charitable partnerships soon extended to the association’s annual NACS Show trade show and conference, which draws in more than 24,000 attendees* and rotates between Las Vegas, Chicago and Atlanta.

In an effort to give back to those local host communities, NACS began making a point of donating food products before and after the Show to local chapters of Feeding America food banks, an effort it has been carrying out for several years.

“This past October, NACS worked with Three Square Food Bank, a member of Feeding America, as well as with NACS member Tyson Foods Inc. to donate a truckload of protein totaling 35,000 pounds to help fight hunger in Southern Nevada,” Schnare said.

She continued, “Three Square distributed the donated food, which was equivalent to 140,000 servings, through its service network of more than 1,600 community partners to reach struggling individuals and families at risk of hunger.”

At the conclusion of the NACS Show, which was held Oct. 7-10 at the Las Vegas Convention Center, Three Square also collected a record 142,829 pounds of food from the Show’s 1,200 exhibitors – the equivalent of 119,024 meals that helped support those facing food insecurity in the Las Vegas community, she added.

“We truly believe that c-store doesn’t just stand for convenience store – it also stands for community store, and we (were) proud to join Tyson Foods in supporting the Las Vegas community that we call home during the NACS Show in Las Vegas,” said Jeff Lenard, vice president of strategic industry initiatives at NACS.

Before and after its 2017 and 2016 shows in Chicago and Atlanta, NACS worked with the Greater Chicago Food Depository and the Atlanta Community Food Bank, respectively.

In order to help its member retailers take the spirit of charitable giving back to their own communities, NACS works with its national charity partners to create programs, resources and connections such as its online Community Toolkit, customized customer donation program (CDP) kits and expedited connect points to help retailers create branded donation programs. 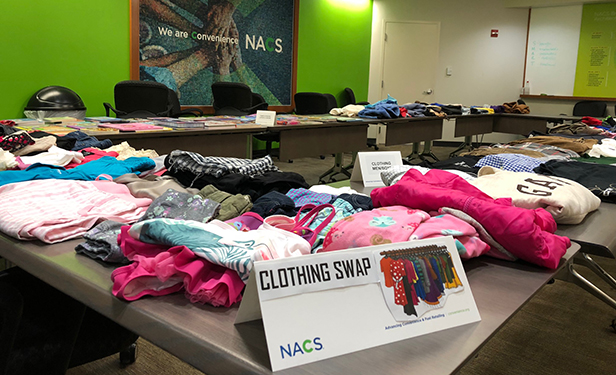 “We have a turnkey program available with the American Red Cross to collect in-store customer donations (and) we offer direct connection with Feeding America, Share Our Strength and Children’s Miracle Network to help retailers create their own customizable programs with those groups,” Schnare explained.

She added, “We also offer free materials for two anti-human trafficking groups: Department of Homeland Security Blue Campaign and IN OUR BACKYARD’s C-Stores Against Trafficking (CSAT).”

Launched in October, the NACS’s new partnership with CSAT is designed to help raise awareness about human trafficking and share resources with the c-store community to help address the problem.

By equipping c-stores with employee training on recognizing and safely reporting the signs of human trafficking and providing life-saving materials to post in stores, the CSAT program engages the convenience and petroleum industries to play a vital role in combatting human trafficking.

So far, the program has partnered with nine state associations and trained nearly 13,000 employees representing thousands of c-store locations.

“U.S. convenience stores serve 165 million customers a day in every community and most of these businesses are open 24/7,” Lenard said.

He continued, “Our industry is well-equipped to share important messages in stores so that employees and customers can collectively create the equivalent of a neighborhood watch program in their communities. We are proud to work with CSAT on this important issue.”

Lenard also serves as a board member for the National Safe Place Network, which works with companies, including convenience stores, to provide access to immediate help and supportive resources for at-risk youth.

In 2017, NACS formed an alliance with the U.S. Department of Homeland Security’s Blue Campaign to engage government support and resources to raise public awareness about human trafficking and encourage convenience store involvement.

With consumers increasingly saying that they will support companies that support their communities, especially around important issues, these CSR programs are a timely addition to the NACS culture and the industry it serves.

According to a September 2018 NACS Consumer Survey, 49 percent of consumers and 61 percent of millennials say they are more likely to support companies that participate in community projects or donate to charitable causes.

In addition, the survey revealed that 40 percent of all consumers say that human trafficking is an issue that they would support their local store in combatting.

It appears industry-led programs and awareness campaigns may be inspiring a lot of c-store professionals to get involved in making a difference. According to the same NACS survey, the convenience store industry donates more than $1 billion annually to charity through monetary and in-kind donations. 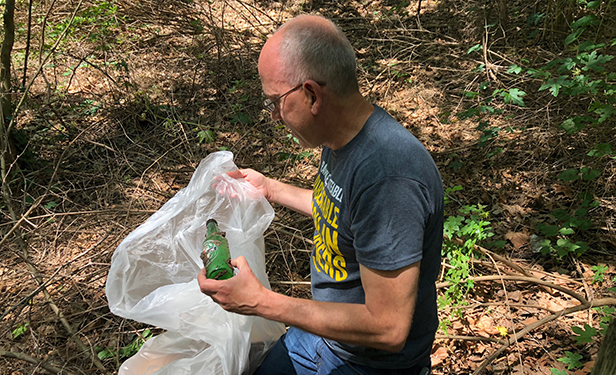 But all these ambitious efforts wouldn’t make as much sense if NACS wasn’t also walking the walk at its own headquarters in Alexandria, Va.

Throughout the year, NACS offers its employees several opportunities to give back, including an annual donation drive in December to one or more charities including food banks, local shelters, Salvation Army and Veteran groups, an annual volunteerism day and other special events.

“We thoughtfully plan NACS staff charitable activities to coincide with NACS industry initiatives and partnerships while also incorporating local charitable organizations, much the way we expect retail members would do,” Schnare explained.

She continued, “Employee participation is encouraged and supported by the organization and all donations collected are from employees and not from NACS funds. NACS staff are active and participatory in these events and appreciate that the organization integrates time and energy to support charitable activities.”

This past year, the association further integrated CSR into its culture by launching its 1stannual NACS Gives Back day on June 15 when 60 staff members had the opportunity to help local non-profits by participating in a number of volunteerism activities, including:

As economic disparity in our society continues to grow alongside the consumer and employee desire to do business with and work for companies that care about people and the planet, not just profits, it makes sense that more and more companies – including those that work in and around the trade show industry – will follow these early adopters of CSR and begin integrating volunteerism and donation programs into their show programming and corporate cultures.

Not only does CSR improve employee morale and satisfaction as well as promote customer engagement, but it also helps build brand loyalty for organizations willing to invest in CSR by offering show participants the chance to engage in volunteerism activities and charitable giving at their trade shows and industry events.

“When incorporating CSR activities into member events, work with local CVBs or the event location coordinators to identify and connect with local charities,” Schnare advised. “With big events on a regular location rotation, working with a national organization to help identify their local affiliates is very helpful.”

IAEE, Smart City Networks and Caesars Entertainment Make a Positive Impact in Local and International Communities
This article is the second in a series that we will be running throughout the holiday season shining a bright, well-deserved spotlight on companies that are #GivingBack. The…
Connections Housing Acquires Par Avion
Full-service sourcing, housing and event management company Connections Housing has acquired Par Avion, a full-service convention housing and travel company based in Lawndale…
For the Good of Everyone: How to Make Your Event Sustainable
When the event is over and you’re basking in the glow of success, nothing can put a damper on your hard work quite like seeing the post-event pile: huge stacks of leftover or…
The Challenges of Measuring the Environmental Impact of Events
In today's global landscape of environmental awareness, it is crucial to learn where event environmental impacts are generated. As part of the team who generated these Impact…
UFI’s Global Barometer Points to Positive 2018 for Exhibition Industry
Last year ended on a positive upswing that will follow into 2018, according to the 20th edition of UFI – The Global Association of the Exhibition Industry’s Global Barometer…
Sometimes the Show Must Go On Differently — Here’s How NACS Pivoted
There are so many things that flash through your brain when you realize that world events will overtake the event that you have planned for months if not years. With our…