CES Has Debuted Next Generation Consumer Technology for 50 Years 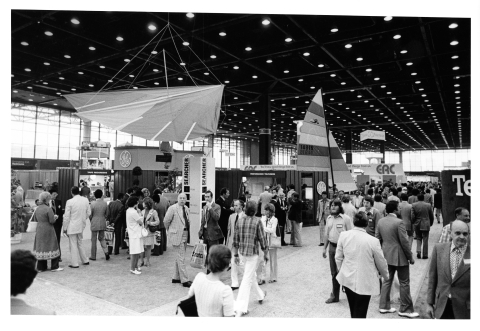 The Consumer Electronics Show (CES) debuted in June 1967 as a response to the growing demand for consumer electronics products. The Americana and New York Hilton hotels hosted 117 exhibitors showing off such state-of-the-art technology as transistor radios and small black-and-white TVs to 17,500 attendees.

In 1963, after noticing a shift in consumer culture, Jack Wayman founded the Electronic Industries Association – what is now the Consumer Technology Association (CTA, which owns and produces CES). Within a few
years, the next step was to launch an event to drive the industry forward.

The early CES events featured popular products like CB radios and color TVs. Since then, nearly every next-generation technology product of the past five decades has made its debut at CES. In fact, it is estimated that
700,000 new products have launched at CES over the years, including:

In 1972, the show moved to Chicago, and in 1978 it changed to a biannual event, with summer events in Chicago and winter ones in Las Vegas. But in 1998 the summer event ended and CES has been a January staple in Las Vegas ever since.

Over the years, the CES stage has hosted industry pioneers as well as Hollywood legends such as Tom Hanks, Robin Williams, Lady Gaga and Justin Timberlake. World leaders, such as Paul Kagame, president of Rwanda, have used CES as a platform to discuss the impact of technology on their country.

In 2012, CES launched the Eureka Park and University Innovations areas, which are dedicated to up-and-coming technology startups, providing them with exposure to potential investors and partners.

At CES 2017, more than 3,800 exhibitors, including 600 startups, will unveil their innovations. The show is now the world’s largest innovation event, representing every aspect of the consumer technology industry, from tech giants to entrepreneurs. “In fact, 20 percent of exhibitors at CES 2017 didn’t exist as companies merely three years ago,” Fried said.

Nine current exhibitors who were part of that first show will be honored at CES 2017: 3M, Lenovo, Memorex (now called MEM-CE), Panasonic (the only company who has exhibited every year), Philips, Sharp, Sony, Toshiba, and Westinghouse.

“As the consumer technology industry evolves and expands, so too does CES,” Fried said. “We (show organizers) strive to make CES a great business experience for everyone who attends the show – including our exhibitors, buyers, manufacturers, installers, media and beyond. We value our customers and partners, including the Las Vegas Convention and Visitors Authority, and we work diligently year-round to ensure everyone who attends CES has a successful experience.”

On Your Marks: Run Shows Set to Debut in U.S. Next Year
Raccoon Events is built upon the guiding principle that runners slow down to walk trade show aisles and — dare to dream, sit — for inspirational keynotes. Having successfully…
Inaugural International CES Asia Attracts More Than 4,500 Consumer Technology Professionals
More than 4,500 consumer technology professionals from 80 countries have registered for the inaugural International CES Asia™ since the launch of registration three…
Consumer Technology Association Unveils Intel’s Kirk Skaugen will Keynote CES Asia 2016
The Consumer Technology Association, formerly the Consumer Electronics Association (CEA), has revealed Kirk Skaugen, senior vice president and general manager of the Client…
Sponsorship 2.0: The Next Generation of Trade Show Marketing
It never ceases to amaze me how many hats trade show managers have to wear. We can’t just be good at what we do on a day-to-day basis. We also need to stay on top of…
CES Celebrates 50 Years of Tech in 2017
Next year’s CES 2017 will mark the show’s 50th anniversary. Since its start in 1967, CES has showcased an estimated 700,000 products. These include world-changing…
How Experience Kissimmee Has Served In-Person Events for the Past Year
Experience Kissimmee Senior Director of Meeting Sales and Services Michelle Moore couldn’t believe her ears at a recent meeting at the Gaylord Palms Resort and Convention…