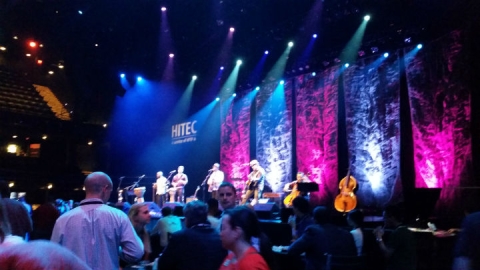 Even though Tropical Storm Bill was making land and approaching Austin, Texas, HITEC 2015 packed just as strong of a punch.  The show June 15-18 at the Austin Convention Center and topped last year’s numbers, with more than 6,000 attendees, a sold out exhibit floor of 86,000 square feet and 823 exhibitors.

“We have seen standing room only in several boot camps, we sold out for exhibitors, and we see how important technology has become in the hospitality sector,” said Steven Stout, director of meetings and special events, HFTP.

He added, “There is a whole new world to keep up with, and IT now has to be part of the innovation of a business, from building a business plan to pitching a new technology to the board. At HITEC, we are looking to help IT professionals move into this more complex role.”

Along with this new industry trend, educational topics discussed included cyber-crime and the new EMV rules, Wi-Fi bandwidth and support and the introduction of social media data aggregation and proximity marketing.

Exhibitor Tom Galido, chief strategy advisor, Kaptivating, said, “With so much unstructured data, including that on social media platforms, the hospitality industry has to become much more savvy with using data to drive marketing, messaging, and ultimately revenue. HITEC was a clear choice for us as first time exhibitors, to have that conversation on the show floor, show the technology, and help properties understand how they can tap into that data.”

The notion of a new type of IT manager was echoed with many attendees, including David Fincannon, IT Professional with Redwood Systems Group.

“There is a definite shift in how IT not only functions, but works with other departments,” he added. “The technology trends discussed in the show are very important, of course. However, IT is transitioning to be more of an advisor and part of the conversation on strategy earlier in the decision making cycle.”

The soft side of data also was explored and discussed, including how to engage millennials. Exhibitor Mark Heymann, CEO of UniFocus, said, “When it comes to labor management, just focusing on the numbers no longer works in the industry. How engaged are your staff with the guest? How much did the staff go ‘above and beyond’ in a particular experience? That information is just as vital to the hotel manager as having the right number of staff on hand.”

Within the educational sessions, there was a shift in focus to the attendee’s comfort level. “We looked at learning theories for the adult learners as we developed our sessions, including seating and lighting, to encourage conversation and engagement,” Stout said. “We wanted to be sure HITEC provided the best possible experience for attendees, whether on the show floor, in a session, or even with things to do in and around Austin.”

Attendee Michael Brown, senior technical project manager of South by Southwest, agreed. “The show has done a tremendous job in the overall experience,” he added. “A conference is no longer just about getting information. It needs to have an impact on the attendee.”

Why Internal Marketing Could Be the Most Important Marketing
Disney is one of the most effective brands of all time. Through its parks, films, and stores, every brand touchpoint induces the same magical feeling and inspires loyal brand…
Travel, Hospitality Groups Condemn Storming of U.S. Capitol
Leading travel and hospitality associations, many based in and around Washington, D.C., swiftly released statements condemning Wednesday’s violent attack on the U.S. Capitol…
These Two New Technologies Could Vastly Improve the Exhibiting Experience
With sharing economies transforming how people travel, commute, work, read and listen, it makes sense that this trend is spilling over into trade show exhibiting. Enter…
SXSW Lessons: How Could Brand Activations Transform the Trade Show Experience?
Sitting on your trade show floor is an exhibitor who is spending quite a bit of money to be there, but he or she may be thinking, “For this type of investment, I could be…
Winter Storm Stella Prompts Trade Shows Up and Down East Coast to Cancel, Close Early
With Winter Storm Stella bearing down on the East Coast and the brunt of it striking today, trade shows up and down the East Coast from Atlantic City to New York City…
A Spin on the Same Old Engagement
I recently was at the Women In Travel conference,  which had a focus on networking and connecting in order to promote and learn.  Since the focus of the conference…