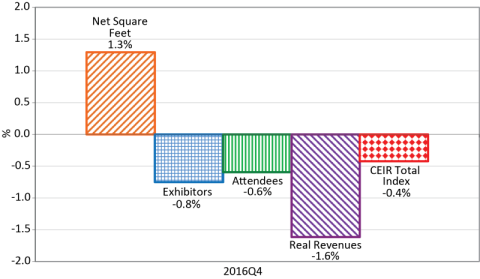 The Center for Industry Research released its latest CEIR Total Index Report that indicated growth of the trade show industry declined during the fourth quarter of 2016.

Driven by a 1.8 percent drop in real revenues, the performance of the industry posted a modest year-on-year decline of 0.4 percent, after 25 consecutive quarters of year-on-year growth.

The dip occurred only in three sectors: Industrial/Heavy Machinery and Finished Business Inputs, Raw Materials and Science and Consumer Goods and Retail Trade.

“We are hopeful this is a temporary downturn and the industry will rebound in Q1 2017,” said CEIR Foundation CEO Cathy Breden, CMP, CAE. “We look forward to the release of the CEIR Index Report in early April which will provide an overall view of 2016 performance and a forecast for 2017-2019.”

The exhibition performance varied substantially by industry in 2016. The best performing sectors were Food and Building, Construction, Home and Repair, which gained 5.8 percent and 5.2 percent, respectively.

On the other end of the spectrum, the weakest sector was Raw Materials and Science, in which the index declined by 7.3 percent.

As mentioned previously, this sector has been plagued by weakness in oil prices that led to declining investment and production levels; however, prices and investment recently have begun to recover.

The Industrial/Heavy Machinery and Finished Business Inputs sector registered the second largest decline of 4.5 percent, which could just be a correction after a whopping 11.0 percent jump in 2015.