St. Louis Gets to the Art of the Matter at America’s Center 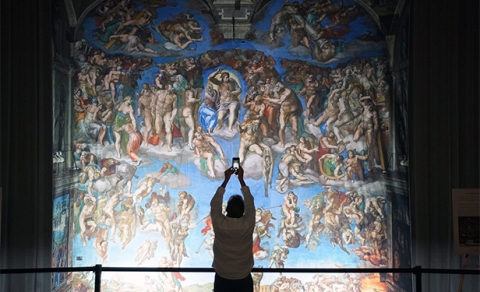 Awaiting a renaissance of the events industry, Explore St. Louis turned to Michelangelo to drive customers to the America’s Center.

The international touring exhibit, Michelangelo’s Sistine Chapel: The Exhibition, adorned the ceilings of a 27,625-square-foot ballroom inside the convention center. Open Thursday-Sunday between Nov. 6, 2020-Jan. 17, 2021, the attraction sold 15,457 tickets and generated $210,000 in revenue at a time when meetings and conventions were not operating inside the facility.

Without event business to occupy the building, the facility could have been closed for months without clever bookkeeping and marketing from city officials. Ticketmaster records show visitors came from hundreds of miles away to witness the exhibition, which consists of more than 30 photographs meticulously recreating the Vatican’s signature ceiling.

“It was all right there as opposed to being 65 feet above you,” Hall noted.

The Vatican launched the touring artwork to combat over-tourism by bringing re-creations to interested parties across the world. In an ironic twist, St. Louis capitalized on Michelangelo’s appeal at a time when the pandemic severely limited travel.

A virtual press conference helped build buzz for the months-long event, which, among other benefits, kept hospitality officials and convention center workers employed and in good practice for when group business picks up — presumably later this year.

“Once you stop altogether, you’re going to lose people to other employment opportunities,” Hall said of the importance of staying operational.

To maintain the health and wellbeing of guests, only 100 ticket holders were allowed into the exhibit per hour. Other measures included:

The exhibit was the second high-profile method St. Louis employed to make use of its convention center. Last summer, NBC used The Dome at America’s Center to film its entire season of American Ninja Warrior.

More recently, the destination began welcoming youth volleyball tournaments as traditional events begin returning to the center. The TransWorld’s Halloween & Attraction Show is scheduled for America’s Center May 6-9. TransWorld is adding its Christmas show to the festivities this year, it announced, which also includes the company’s Room Escape Conference.

Event organizers returning to St. Louis this year will see many new attractions, including expansion of an entertainment district outside Busch Stadium, City Foundry — a shopping and dining hall opening this spring — and new development outside Union Station, including a new aquarium. In 2023, a new soccer-specific stadium will be completed to coincide with the completed expansion of America’s Center.

Colorado Convention Center Gets Nod for Expansion
Denver voters overwhelmingly approved an expansion of the Colorado Convention Center by passing a special initiative Nov. 3.  The project will be paid for by funding…
Nashville’s Music City Center Gets Nod for Expansion
Three years after Nashville’s Music City Center was built, the local Convention Center Authority just approved to expand the venue. The center now has a $19.9 million…
Georgia World Congress Center Gets Ready to Grow
The Georgia World Congress Center is about to get even larger. Late last month, the downtown Atlanta facility officially broke ground on a $55 million expansion project, the…
Sustainability Check-In: How U.S. Convention Centers are Getting Greener
Implementing sustainable practices isn’t just good for the environment, it’s also good for business, as many convention centers have discovered. According to the 2017 Green…
Art and the Convention Center
We all have considered having meeting and events in art and museum galleries, both of which provide a unique atmosphere and exposure to art and culture.  What has been…
How TCF Center, Caesars, LA Convention Center and More Are Getting Greener
Several hotel brands and convention centers are jumping on the green bandwagon to help the environment and people in need through an array of sustainability and CSR…