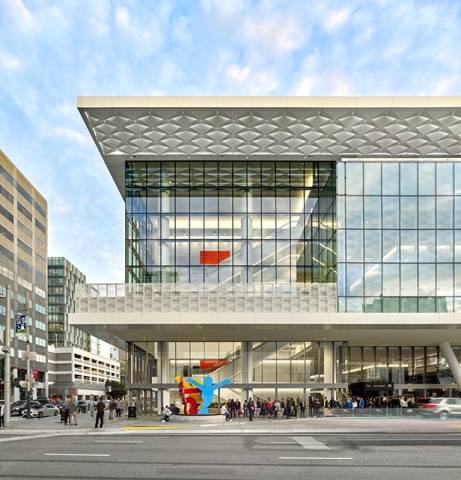 After its on-schedule completion at the end of 2018, the long-awaited Moscone Center expansion project was celebrated with a grand opening gala event on Jan. 3.

The $551 million expansion adds more than 157,000 gross square feet of flexible meeting space to Moscone North and South and increases the center’s total exhibit space to more than 504,000 sq. ft.

“Our two main goals have been to create contiguous space and flexibility for the Moscone Center,” said Lynn Farzaroli, senior director of the Moscone expansion for San Francisco Travel Association. “It’s a brand-new center with state-of-the-art everything and we’re really excited.”

The Moscone expansion nearly doubles the current amount of contiguous space that can be used for exhibitions and meetings and now offers:

The expansions were designed to make the Moscone Center “go beyond” LEED Platinum certification. Besides a rooftop solar array designed to generate up to 19.4 percent of the building’s energy needs, the Center will recover 15 million gallons of water annually, practice recycling and composting facility-wide, and have the lowest carbon emissions per delegate of any major convention center in North America, according to Moscone officials.

Two new pedestrian bridges across Howard Street were also part of the expansion. The East Bridge allows event attendees to access the upper levels of Moscone North and Moscone South without returning to ground level, while the West Bridge is a public access bridge connecting the Yerba Buena Gardens on either side of Howard Street.

The Moscone Center is located in downtown San Francisco, 14 miles from San Francisco International Airport (SFO) and just a few minutes’ walk from 22,000 of the city’s more than 33,000 hotel rooms, world-class dining, shopping and cultural venues. There are also a number of public transportation options nearby, including Bay Area Rapid Transit (BART), Muni and CalTrain.

According to Brett Allor, San Francisco Travel’s senior director for market strategy and research, the city has already booked 1.2 million room nights for 2019.

The Moscone Center is also now home to the San Francisco Visitor Information Center, which opened in its new location on Jan. 2, and is staffed by San Francisco Travel, the official destination marketing organization for the City and County of San Francisco.

To learn more about the Moscone Center, go HERE.