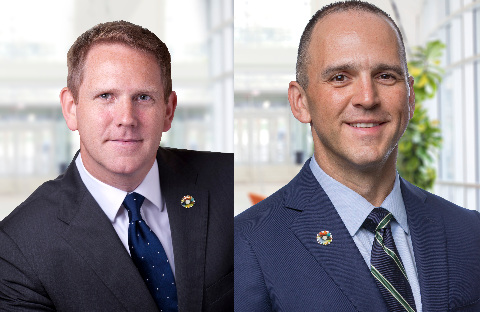 This fall has been a busy one for companies in the meetings and trade show business. Take a look.

GES announced two major leadership changes this week. Jay Alitzer, who joined the company in May 2018, has been named global president, and Ian Dunhill, formerly CFO of Gold’s Gym International, joins the company in the newly created position of executive vice president of finance.

Freeman has promoted Michelle Johnson, previously senior vice president and chief information officer, to executive vice president of the company. She has been with Freeman since 2009.

Mike Burns has joined the Oklahoma City CVB as vice president of sales, overseeing the sales and convention services team. He previously served in a similar role at Destination Cleveland.

The Meetings Mean Business Coalition selected Fred Dixon, president and CEO of NYC & Company, as its next co-chair (alongside Trina Camacho-London of Hyatt Hotels Corporation). He will begin his new role in January 2020.

Naji El Haddad was named new regional manager for UFI’s Middle East-Africa region last month. He brings more than a decade of experience in the region to his new role, including his most recent position as group event director for Reed Exhibitions. Géraud de Dieuleveult has also joined the company as business development manager, based in Paris.

Two new directors have been elected to International Houseware Association’s board of directors: Paul Cosaro is CEO of Picnic Time Family of Brands, and Kavita Shukla is founder and CEO of The Freshglow Co. Their three-year terms began Oct. 1.

Atlanta CVB announced two new managerial promotions in September. Megan Wilkinson, manager of convention services, will manage bookings for groups from 250 nights on peak to citywides. She previously served as a sales manager with the CVB. Joseph Henry has also been promoted to technology manager, after previously working as a technology specialist. Also at the CVB, Brad Minton has been hired as a sales manager for national accounts, and Treasure Williams has joined the team as a sales manager.

IAAPA, the global association for the attractions industry, elected Jim Pattison, Jr., who’s president of Ripley Entertainment, as second vice chair during its Sept. 16 meeting in Paris. He will serve as first vice chair in 2021 and lead the association as chairman of the board in 2022.

Hargrove, a full-service event, exposition and experience marketing production organization, hired Tara Higgins to lead the company earlier this month. In her new role as president, she will lead the company in its next chapter of growth. Rachel Paisley has also joined the company as director of sales for events. Previously with Red Velvet Events, Inc. in Austin, Texas, she brings 17 years of director-level experience to her new position.

Have a people announcement to share? Email it to kogletree@tsnn.com for a chance to be featured in our next People roundup.

People News: Tourism Vancouver’s New CEO, Plus More New Hires and Promotions
Recent job reports from the Bureau of Labor Statistics are dismal, yet the good news is that some companies within the events industry are still making hires and promotions.…
People News: Freeman, PCMA, Clarion UX and More Make Hires
Companies within the events and tourism world continued with a flurry of hires in March, showing the economy and outlook for the industry looks strong. Freeman has named a…
People News: The Expo Group, GES, Leftfield Media Make New Hires
The month of May has been an unusually busy one for new hires across a wide variety of companies in the trade show industry. The Expo Group hired Lloyd van Meter its new…
People News: Core-apps, L.A. Convention Center, Comexposium and More Make Hires, Promotions
In the past, companies typically slowed down with their hiring and other employee changes throughout the summer months, but not anymore. Now, it’s full steam ahead all-year…
People News: 2016 Ends with Flurry of New Hirings, Promotions
Instead of ending on a quiet note, last year finished up with a flurry of new hires and promotions at venues, convention bureaus and other companies. John Gonzalez, the long-…
People News: Winter Months Bring Plenty of New Hires, Promotions
With the holiday season upon us, the trade show industry busily continues to grow its ranks and promote from within. In addition, some long-time people in the industry…