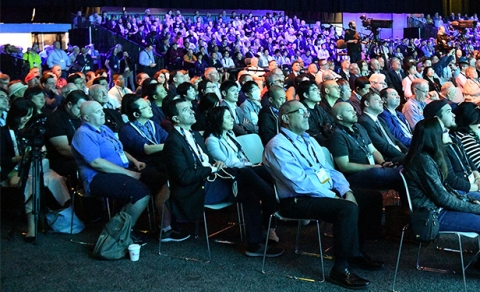 In a sign of the times, NAB Show is springing forward with a back-loaded plan for 2021.

Traditionally a springtime event in Las Vegas, the National Association of Broadcasters’ largest gathering will be held Oct. 9-13, 2021, at the renovated and upgraded Las Vegas Convention Center. The event was originally scheduled for April 11-14, a period that falls into a window of “growing concern and uncertainty,” said NAB President and CEO Gordon Smith in a statement announcing the move.

The show’s move is not surprising, and could signify one of many trade shows to rearrange their schedules to buy time for COVID-19 vaccinations to be distributed. It is also hoped that by mid- to late-2021, attendee confidence in traveling will gravitate toward previous high levels.

Smith added that NAB carefully selected its new dates to avoid conflicts with related shows, allowing vendors and buyers to make up for as many lost in-person connections as possible.

While NAB 2020 went virtual, the organization did not want to repeat history. The delay lays the groundwork for a return to in-person gatherings considered more beneficial to the broadcasting industry.

“October is looking like it is well-timed,” said NAB Executive Vice President of Conventions and Business Operations Chris Brown. “We are also confident that we can deliver the right audience—those in decision-making roles who will need to plug into major industry events more than ever.”

According to show officials, NAB 2021 will be larger in scope than past years, a byproduct of multiple events consolidating around the mid-October dates. The 2021 Radio Show and NAB’s Sales and Management Television Exchange will be part of the fall festivities.

Meanwhile, the Audio Engineering Society announced its fall convention will collocate with NAB 2021 Oct. 11-13 at Westgate Hotel, adjacent to the convention center. Average attendance at AES shows numbers at 15,000 attendees and more than 300 exhibitors. Combined with NAB’s average of more than 90,000 attendees, the 2021 show could prove to be one of the largest in-person gatherings since the pandemic took hold.

AES and NAB New York collocated between 2017 and 2019, when the events simultaneously occurred at Jacob K. Javits Convention Center.

Combining forces will best for all involved, both parties agree.

“We all miss the engagement and excitement of the in-person AES Show and look forward to once again interacting at the convention with professional audio manufacturers and our colleagues,” said AES Executive Director Colleen Harper.

Added Brown: “Together with AES, we will provide unparalleled access to critical information, inspiration and solutions for audio engineers and content creators. We are excited to be building the most significant, in-person media and entertainment event of 2021.”

Some lingering effects of COVID-19 may remain. For instance, event staff will work closely with the Las Vegas Convention & Visitors Authority and convention center crew to enforce the CDC's recommended safety measures at that time.

The pandemic has also sped up the organization’s efforts to connect with attendees digitally year-round, notes Brown. Confidence is high the show will go on as close to normal as possible, but virtual elements could remain—possibly for years to come.

“We see live and digital events as great compliments to one another, and we are absolutely planning to create a hybrid experience for the major in-person events we produce,” said Brown.

Nevertheless, excitement to return in-person is evident. “While digital events offer greater flexibility and content that lives beyond the event itself, there is no substitute for in-person trade shows,” Brown added.

While NAB 2021 falls into place, the organization is evaluating where to slot its annual New York show, usually held in October. Also looming is NAB 2022. Brown isn’t ruling out a return to spring despite the short window that would exist between events.

“We know the industry is itching to return to a normal schedule and make up for lost time,” he said. “The pace of change directly affecting the media sector has not slowed down during the pandemic. If anything, it has increased, creating a need for the industry to connect more frequently.”