How to Hold a Show Before, During, After a Blizzard? Communication Is Key 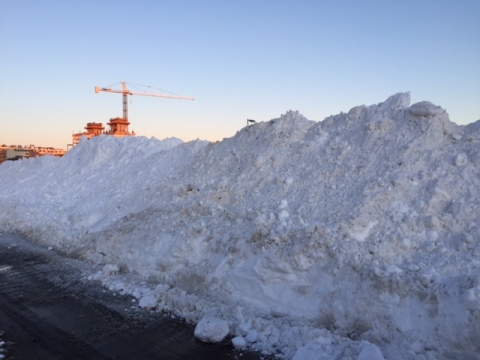 Smack dab in the middle of a busy trade show season in Boston, the city and surrounding areas have been hit by four blizzards in less than a month’s time.

Mother Nature doesn’t care if a show needs to be moved in or opened on time, but a lot of hard-working and quick-thinking show organizers, meeting planners and the Boston trade show community supporting them somehow made it through.

“We’ve had 70 inches of snow in just over 17 days,” said James E. Rooney, executive director of the Massachusetts Convention Center Authority a few days before the New England Boat Show was scheduled to open with another storm on the way.

He added, “There has been no temperature relief. It’s just all piled up and not going anywhere.”

The boat show was set to kick off on Valentine’s Day and run through Feb. 22 at the Boston Convention & Exhibition Center, and the storm was hitting opening night with 80,000 attendees expected to take part in the annual event.

“We work with the shows and let them know about traffic, parking and transportation issues,” Rooney said.

He added that one of the logistical issues that had to be conquered for the boat show was moving in all of the boats around huge mountains of snow.

“Communication was important. You wanted to be a reliable source of information,” Rooney said. “We do try from a communication standpoint to work with all of our events.”

Another large show, Yankee Dental Congress, which had about 25,000 attendees on their way to Boston the day after the first major blizzard of the year had hit, also had to think on their feet to get the show open on time.

Shannon McCarthy, the show’s director of sales, said that their “stars were aligned” because this year was the first one they were back with Freeman, a general service contractor they had worked with in the past.

“We had people who had previously worked on our show for 20 years,” she added. “We were able to get into the building early and set up a lot beforehand. We were already ahead of the game.”

On the Sunday before the storm hit, Yankee Dental sent an e-mail to all of the exhibitors telling them they could come in early to set up. “A lot of them are local, smaller companies,” McCarthy said.

The day of the storm, Jan. 27, she added that her staff spent the day putting up signage everywhere and taking care of other details that usually might have been done right before the event opened.

They also met several times with the BCEC security teams who were constantly giving them updates.

“During this entire time, we told exhibitors and attendees that the city wants to be open and ready to go,” McCarthy said, “So, we kept pushing forward a positive message.”

In fact, in coordination with Katie Hauser, who heads the BCEC communications team, e-mails were sent out every day that only focused on things like where travel bans had been lifted, etc. “I think that was crucial because the media loves the negative, and we wanted a good message out there,” McCarthy said.

For the people who took part in the FICP (Financial & Insurance Conference Planners) Winter Symposium at Boston’s Langham Hotel, their experience was a little different, since they already were onsite when the Jan. 27 storm closed the city down.

“We pretty much knew people wouldn’t be able to go anywhere on Tuesday (the meeting’s final day),” she added.

To accommodate local attendees and make sure they had a valuable experience, FICP switched around their education program to ensure that Monday was a full day and made Tuesday a much lighter day.

To keep people up to date on changes, they utilized social media channels, as well as real-time messages on the event’s app.

Kamicar said that as the storm approached, 65 percent of the attendees left to get back home, and the rest made the best of the situation they were in.

“There were 45 attendees with us Monday evening and Tuesday morning,” she added. “This is a group of meeting planners. They really understood the need for all of the changes and what the association was doing to make it a positive experience.”

On Monday night, they were supposed to go offsite for dinner, but had to stay in the hotel. Some of the FICP staff ran out to a nearby store and the hotel worked with them to pull together a fun, last-minute ‘tropical-inspired’ event.

“We had a selfie station with sunglasses, palm trees and a corn hole game,” Kamicar said. “People just had a great time. They recognized it wasn’t the plan, but everyone made the best of it.”

Even after all of the strife of pulling of the events in the middle of piles of snow, both Yankee Dental Congress and FICP said they had overwhelmingly positive responses.

“It actually was a positive energy. We were really surprised,” McCarthy said. “We were talking about the fact that this was the first year in a long time we got so many thank you letters from exhibitors. They felt overall it was a good show and that the people who were there, were there to buy.”

Kamicar, too, said they sent out a survey to attendees and garnered good results. “We had really great responses,” she added.

How to Get (And Keep) People Engaged With Your Booth During a Trade Show
The day of a trade show can be hectic but it’s also when all of your pre-event efforts will pay off. The time you spent tracking and managing segmented guest lists will now…
How 13 Trade Show Professionals Are Following Their Passions During the Pandemic
When Jeff Fugate’s lost his decade-long position as senior vice president of sales and marketing for Experient due to the pandemic, it could have sent him into a tailspin.…
How Communication Is Playing a Key Role In the Events Industry Amidst COVID-19
COVID-19 has made a devastating impact on all the aspects of our lives, but it is also prompting an outpouring of creativity in the events industry. The way we communicate…
5 Things to Consider Before Analyzing The Data Gathered During Your Virtual Event
There was a time when the most clearly attributable data to track ROI from an event was the revenue from ticket sales and sponsorships. With the advent of virtual events…
During COVID-19, Hold Your Next Meeting Outside
Sunny days are upon us, followed by star-studded nights. Wouldn’t it be fantastic if you could bring your typical indoor event outside? The answer is you can…but you need a…
How to Boost Your Physical and Mental Immunity During Stressful Times
As the world faces the growing coronavirus pandemic, many of us are experiencing anxiety and fear about uncertain futures, financial hardships, and protecting ourselves and…