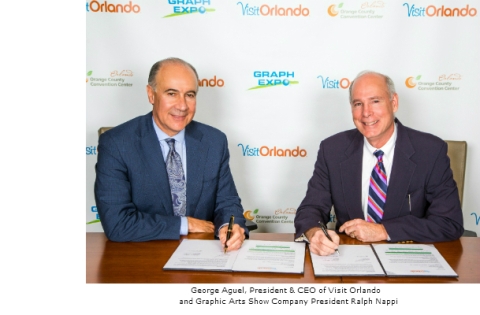 After making its home in Chicago for a long time, Graph Expo will be moving to the Orange County Convention Center in Orlando in 2016 for the first time.

The show, owned by the Graphic Arts Show Company, will be held Sept. 25-28.

"We are delighted to be bringing GRAPH EXPO to Orlando in 2016," said GASC President Ralph Nappi.

He added, “Not only did Visit Orlando and the Orange County Convention Center superbly represent just how ideal a destination Orlando would be for our show’s date and size requirements, they also convinced us with the momentum behind Orlando's booming tourism community that it represents an exceptional overall show visitor and exhibitor experience."

The four-day GRAPH EXPO 16 print technology manufacturing show is expected to draw nearly 25,000 attendees to Orlando in is expected to generate approximately $40 million of economic impact across Orlando.

“Orlando is recognized among the top three convention markets in the United States, based on its modern convention center and dynamic tourism community that is best known for its hospitality and guest service," said Visit Orlando President and CEO George Aguel.

He added, "We are excited to welcome GRAPH EXPO visitors and exhibitors to Orlando for the first time. They will see that our wide variety of resort hotels, the increased investment in our convention center and airport, and the great reputation we now have for award-winning dining and exciting nightlife make Orlando more competitive than ever as a host city for major exhibitions, conventions and conferences."

World Routes Will Take Place in Chengdu, China in 2016
As World Routes draws to a close on the African continent, the Province of KwaZulu-Natal in Durban, South Africa, officially has handed the event over to Chengdu…
CEIR 2021 Predict Conference Will Take Place in Person at MGM National Harbor
What is the trade show industry going to look like in a post-pandemic “new normal?” That is the burning question the Predict Annual Exhibition Industry Outlook Conference…
IAEE Expo! Expo! Attendees Will Rock Out for A Place Called Home
The International Association of Exhibitions and Events will hold its sixth annual Humanity Rocks: A Celebration with a Cause on tap Dec. 10 during Expo! Expo! IAEE…
IAAPA Leadership Conference 2018 Held for First Time in Japan
The International Association of Amusement Parks and Attractions (IAAPA) recently concluded its eighth annual IAAPA Leadership Conference, held for the first time in Japan,…
2014 Toastmasters International Convention Heads Overseas to Malaysia for First Time
Kuala Lumpur will chalk up another notch of “firsts” with the upcoming 2014 Toastmasters International Convention, set to be held Aug. 20-23 at the Kuala Lumpur Convention…
Time to Take Stock of Your Trade Show Inventory
In normal times, you probably exhibited at 10-15 trade shows a year. Once you got back to the office after three days of shaking hands and exchanging business cards, you most…