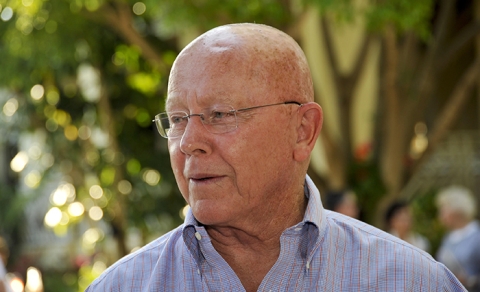 Former SISO Chair and retired exhibition industry icon James Bracken passed away on Jan. 18. He was 87.

Bracken served as SISO’s chair in 2004, and SISO officials expressed gratitude for his service to the association and the industry over the course of his career, as well as condolences to his family and many friends and colleagues in the industry.

“I was lucky enough to get to know Jim when I first became involved in SISO, and he really epitomized the entrepreneurial spirit of SISO,” said SISO CEO David Audrain. “Jim was a highly-respected industry leader and a pleasure to talk with, his contributions to SISO and the exhibitions industry were significant, and he will be missed by the large number of people who had the opportunity to get to know him.”

Bracken served in the Marine Corps for 26 years before joining the trade show industry in 1983. The retired colonel rose from director of the Modern Day Marine Military Exposition to leading VNU Expositions into the global arena, eventually becoming chairman of the company in 2002.

VNU acquired Miller Freeman USA in 2000 when Bracken was president, and today many of those shows, including Action Sports Retailer and Hospitality Design Show, are part of Emerald. At one point in 2004, he led a team of 235 that produced 50 shows in six countries, including the U.S., Brazil, Argentina, Thailand, France and Netherlands.

A trailblazer on the international stage, Bracken was also active in IAEE, Major American Trade Show Organizers (MATSO) and the Center for Exhibition Industry Research (CEIR). After graduating in 1956 with a bachelor’s degree in history from St. Michael’s College in Burlington, VT, he joined the Marine Corps officer candidate school. After tours in Asia, he earned an MBA from Pepperdine University in 1972 and completed the Advanced Management Program at Harvard Business School in 1982.

He is survived by his wife, Judy, three sons and 10 grandchildren and two great grandchildren. Due to COVID, funeral services have not yet been arranged. SISO will provide further information as it comes available.

This announcement was originally posted on the SISO website.

Trade Show Industry Icon William T. Glasgow Passes Away
William T. Glasgow Sr., a 65-year veteran of the trade show industry, passed away peacefully in his home Oct. 23. “BG”, as he was known, started his career in the industry at…
Long-time SISO General Counsel Henry Schaffer Passes Away
The Society of Independent Show Organizers’ long-time general counsel Henry Schaffer. passed away March 1 after a lengthy disease with Alzheimer’s. He leaves his wife…
Tradeshow Industry Trailblazer Jerry Kallman Passes Away
Typically, TSNN would write a straightforward news article on a long-time member of our industry’s passing - Gerald G. "Jerry" Kallman, Sr. – Jan. 10, 1931 - May 20, 2020 (…
People News: Robbi Lycett and James E. Rooney Take on New Gigs, Earl C. Hargrove Passes Away
This past month has been a busy one with several long-time industry figures switching jobs, being promoted or returning to prior places of employment. In addition, there was…
ASAE President and CEO John H. Graham IV Passes Away
ASAE’s President and CEO, John H. Graham IV, FASAE, CAE, has passed away after an extended battle with cancer. “While no words can adequately express our deep sorrow at…
Hargrove Founder Earl C. Hargrove Passes Away
Earl C. Hargrove, founder of Hargrove, a general service contracting company, passed away at age 86. Hargrove CEO Tim McGill and President Carla Hargrove-McGill issued…