South by Southwest’s Brand Activations: Ones That Stole the Spotlight South By Southwest (#SXSW) with its thousands of attendees in the interactive, tech, film and music industries is THE place for brands to roll out the red carpet and show off their latest launches.

This year’s event, held annually in Austin, Texas, did not disappoint, with several companies spending some serious cash to ensure they left an impression.

The ones that hit it out of the park took the time to figure out an actual ‘experience’ that attendees would have, something that trade show and event organizers, as well as exhibitors, could take a page from.

Here are the brand activations that worked:

Season 2 of HBO’s Westworld show premieres in April, and the company decided to create a truly immersive, and very exclusive, experience for lucky participants by recreating part of Westworld’s Western-themed town in a field outside of Austin and bussing participants out there.

Attendees were first directed to meet at a restaurant/bar in Downtown Austin where white-clad hosts handed everyone either a white or black cowboy hat with the Westworld logo imprinted inside. After sipping on cocktails and mingling for a bit, attendees boarded a Westworld-themed bus and were driven out to the site of the actual experience.

Once there, attendees entered the world, just like people do in the actual show, through a portal and then on a train car, and then stepped into a fully recreated Western town, complete with 60 actors who memorized more than 400+ pages of script to engage with attendees.

For fans of the show, there were surprises around every corner with familiar scenes, secret phrases you could whisper to actors to activate special experiences and even a personalized letter in a replica post office for every attendee that connected them even further into the overall experience.

By far, the #SXSWestworld brand activation was the most coveted and buzzed about. HBO didn’t disappoint, and even people who never saw the show before likely cannot wait for the Season 2 premiere

Yes – Land O’Lakes – known mostly for its butter, although they make other things such as cheese and cocoa, was a company that pulled off a spot-on brand activation in downtown Austin.

Walking into a large, open room there was a bank of telephones along one wall. When you picked up a phone, there was a recording on the other end of someone around the world who was experiencing hunger, and they told the story of what they were going through.

For every conversation listened to, Land O’Lakes partnered with Feeding America to donate a meal here in the United States.

Bottom line was this was a success all the way around by not only creating hunger awareness, but also doing some ‘good’ along the way.

Land O’Lakes didn’t stop there – there are three other activations that were in the room:

In short, Land O’Lakes nailed it. They not only successfully showed off their brand, but they also created awareness on several topics and the result was a highly engaging experience for attendees.

Sometimes it’s just tapping into the simple desire that humans might have to hold a little, baby goat.

That’s what cable TV channel Viceland did when it offered SXSW attendees the chance to mingle with the sweet, soft creatures for a few days in a lot in downtown Austin. 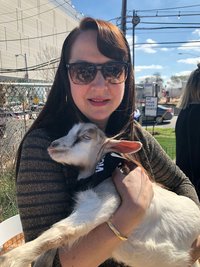 There was a line down the block at 10:00 a.m in the morning as people eagerly waited for a baby goat cuddle.

Once inside the Viceland enclosure, there also were various freebies, including Viceland-branded lighters and prescription bottles filled with mints.

In addition, there was a Viceland-branded party bus that people boarded to find a DJ spinning tunes inside, prompting an impromptu SXSW morning dance party.

All of it, the baby goats, freebies and DJ dance party on the bus supported Viceland’s overall ‘feel good’ brand.

Fox Sports didn’t pull any punches when it wanted to highlight the launch of its new show “Phenoms” debuting in May before this summer’s World Cup kicks off.

People lined up well in advance to have the chance to hear Celebrity Chef and TV Personality Gordon Ramsay talk about why he was involved with the project, along with a panel of other people who were connected to it.

Ramsay was his usual charismatic self, cracking several jokes, including predicting that Iceland would win the World Cup soccer tournament this summer.

Besides Ramsay, there were other soccer-themed activities in the multi-story venue, such as a panoramic series of cameras in front of a stadium that people could have their image captured wearing their favorite team colors and two tattoo artists air-brushing anything and everything for the dedicated fans.

SXSW Lessons: How Could Brand Activations Transform the Trade Show Experience?
Sitting on your trade show floor is an exhibitor who is spending quite a bit of money to be there, but he or she may be thinking, “For this type of investment, I could be…
South by Southwest Showfloor Gives Attendees Glimpse of Future
Robots sparring with light sabers, t-shirts printed on the spot for a good cause, genetic testing companies and lots and lots of AR and VR were just a few of the highlights…
Asia in the Spotlight at Vinexpo 2015 in France
Asia was one of the major highlights of the 18th edition of Vinexpo 2015 in Bordeaux, and plans are well underway for the upcoming editions of the exhibition:…
7 Event Trends That Will Make Your Brand Stand Out in 2018
We saw a lot of trends emerge within the trade show circuit in 2017. Virtual and augmented reality became ubiquitous, mobile technology was used almost everywhere and even…
Personal Branding Series, Week 1: Why Every Event Professional Needs One
If you think cultivating a personal brand is self-centered and self-serving, think again. Amidst the ongoing global pandemic, there’s never been a more important time to…
Industry Unites to Spotlight the Power of Global Exhibitions
Trade show, exhibition and the event professionals took a moment to celebrate the industry’s worth and influence before a grand kickoff of shows begins to flood the global…