XTI-360 Aims to Shield Events from Germs and Viruses 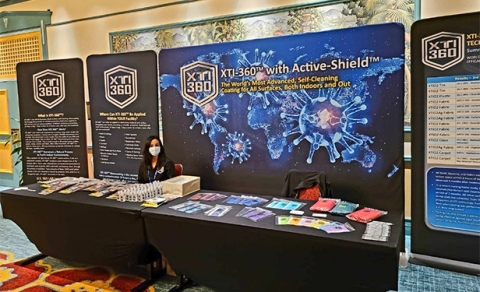 Imagine an event in which attendees are not skittish to touch a surface. While many never gave such a simple movement a second thought before, it will be a point of interest in a post-COVID world.

But a new technology, XTI-360, could put the fear factor back in Pandora’s box. Through nano-coating, seeping into the pores of surfaces, the product kills germs essentially on contact. The company pledges that any product sprayed is safe for up to one year.

“The general idea of this is to substitute technology with human behavior,” explained Joel Hartstone, CEO and chairman of XTI-360. “This lets you take your hands out of your pockets.”

The coating is 99% water, 1% Titanium Dioxide and a drop of silver—a formula that is considered green-friendly.

Bridging the gap from science to trade shows and conferences is Hartstone’s daughter, Emily Hartstone, vice president at Magellan Management, an events management company based in Boca Raton, Florida.

Emily Hartstone handles XTI-360’s public relations and is co-owner of an offshoot company, PromoGuard LLC, which concentrates on applying the anti-microbial coating to promotional items.

A meeting planner by trade, Emily Hartstone is now serving a dual role as a supplier representing XTI-360 at industry gatherings. She facilitated an arrangement in which XTI-360 provided anti-microbial masks to attendees of the Connect conferences last year. As an extension, she took appointments with hotels, convention centers and other venues to use the product—an ongoing effort.

“Our end goal is to coat every touchable surface,” Emily said. “It will take years, but we will get there.” Furthering the cause, XTI-360 recently forged a partnership with the Global Biorisk Advisory Council, the division of ISSA that is responsible for the now coveted GBAC Star accreditation. In theory, this should pave the way toward the coating being utilized at sports arenas, airports and other high-priority sites, perhaps including subway systems, cruise lines, hospitals and government buildings.

Just as silver is known to have healing properties, the technology behind XTI-360 is not new. An engineer in Taiwan developed the formula about a decade ago and the new company is bringing it to North America, Hartstone explained. Her 75-year-old father came on board because of his experience with entrepreneurial efforts.

A new production center in Pennsylvania is bringing the manufacturing to the United States, with other centers in the pipeline. Once a client signs on, staff is trained to properly administer the coating or XTI-360 can apply it themselves. GBAC will also work to employ the product.

So far, the response to the potentially revolutionary product is one of two extremes: Vendors either love it or think it’s too good to be true. “This is the real deal,” Emily Hartstone said.

Emily Hartstone, who faces a continual battle with Leukemia, swears by XTI-360. She has coated all her clothes, devices and surfaces.

COVID-19 vaccines will not make the technology out of date—meeting planners will appreciate its ability to nullify perennial problem child norovirus and other viruses that plague events.

“This is an opportunity to change the world,” Hartstone said.

3 Products to Cut Down on Germs at Trade Shows and Events
With concern over germs at perhaps an all-time high, event organizers must rethink areas that are traditionally high-touch at conferences and trade shows. These three…
Hurricane Matthew Takes Aim at Eastern Seaboard, Events Begin to Cancel
Hurricane Matthew already has wreaked devastation across the Caribbean, and now the most current forecast has its trek taking aim at not only the East Coast of Florida, but…
LRP Publications Buys Singapore-based HR Events From Diversified
U.S.-based LRP Publications has added Singapore-based HRM Asia, a business unit of Diversified Communications, to its human resources-focused portfolio.  The new entity…
Creating the Perfect Event Lighting – Advice from the Experts
When planning an event there is one element that can make a huge difference to the atmosphere of the occasion – the lighting. The right lighting will direct attention to the…
3 Event Tech Highlights from Expo! Expo!
This year, the trade showfloor at Expo! Expo! IAEE’s Annual Meeting & Exhibition, which took place Dec. 3-5 at Mandalay Bay Resort and Casino in Las Vegas, featured…
6 Real-Life Learnings from Digital Event Experts to Make Your Events Better
Many trade show and conference producers have found themselves in unchartered territory as they’ve made the in-person to online event pivot over the past several months.…