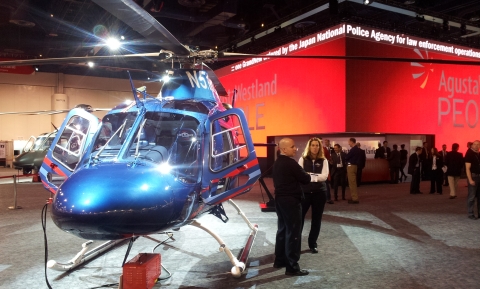 The second quarter of 2015 was a good one for Phoenix-based Viad, the parent company of Global Experience Specialists, with revenues surging 23.7 percent to $317 million, compared with $256.4 million during the same time period the year before.

GES had a particularly strong quarter, with revenues increasing to $286.6 million, a 26.5 percent increase, compared with $226.6 million during the same time period the year before.

“GES delivered much stronger results in the second quarter than we had previously expected,” said Steve Moster, president and CEO.

He added, “The upside came from a number of areas, including same-show revenue growth, a near historic level of revenue from short-term bookings and a significant increase in sales to our corporate clients. The team did a great job driving this additional revenue to the bottom line.”

Moster said same-show growth of 7 percent in the second quarter was higher than the 5 percent that was expected, adding that it was a “positive sign for the industry.”

He also said that the company did “very well in short-term bookings”, which were contracts that came in since the beginning of the year.

“It really points back to the value proposition we have for our clients,” Moster said.

A big part of that value proposition is being a full-service destination for all of their client’s needs, which the company has striven for with the acquisition of companies such as onPeak, N200 and Blitz Communications. Moster said the acquisitions have “delivered as expected. “

He added the second quarter saw a lot of “great activity with cross-selling.” For example, existing shows, such as HAI HELI-EXPO and SIA Snow Show, to name a few, added additional services GES offered.

Viad’s 3Q Revenues Increase 36 Percent; GES’ U.S. Revenues Up 39 Percent
The third quarter was a good one in more ways than one for Phoenix-based Viad, as well as its divisions, including Global Experience Specialists in the U.S. and overseas.…
GES Scores Nearly 35 Percent Q1 Revenue Jump
First quarter revenues saw a significant jump for GES of nearly 35 percent to $318 million compared with $236 million during the same period in 2016. “GES’ growth during the…
Viad’s Overall 2015 Q1 Revenues Down 7.4 Percent, Same-show Revenues Up 7.4 Percent
Negative show rotation in the first quarter of 2015 had an impact on Viad’s overall revenues, dipping to $264.4 million, compared with $285.6 million in the first quarter of…
GES Q1 Revenues Down Nearly 16 Percent on Negative Show Rotation
GES recently reported its first-quarter 2018 earnings results in which revenues dropped 15.8 percent from $318 million in 2017 to $268 million during the same period this…
UBM’s ‘Events First’ Strategy Pays Off with 30-percent Revenue Surge in 2015
UBM announced last year its strategy was going to focus on putting ‘Events First’, and those efforts paid off, with full-year 2015 total revenues surging 30 percent to $1.3…
$551 Million Moscone Center Expansion Nears Completion
Some of the construction in downtown San Francisco will be ending soon, with a positive impact for event planners and attendees. The $551 million Moscone Center expansion…