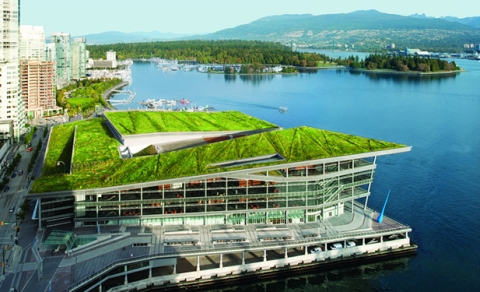 Coupled with its 2010 LEED Platinum certification for New Construction, the VCC now owns the bragging rights for being the only double LEED Platinum convention center in the world.

“While the Vancouver Convention Centre was built to the highest environmental standard with features like our six-acre living roof and impressive green technology, our commitment to the environment is more than the building itself, significant as it is,” said Ken Cretney, president and CEO of BC Pavilion Corporation, which runs the VCC.

He continued, “When we opened our West building, we set out to be a global leader in sustainability to make a difference in our community and global industry. I am extremely proud of our team for its dedication and hard work to further our sustainability program, resulting in this prestigious second Platinum designation.”

Platinum is the highest level of LEED certification that a green building can attain and v4 is the newest version of the rating system, which features a more flexible, performance-based approach that calls for measurable results throughout a building’s lifecycle.

Considered “the framework and benchmark for the next generation of green buildings,” v4 also allows for a more streamlined user experience and more goal-oriented credits.

According to VCC officials, the achievement of this additional green certification resulted from a rigorous process of re-examining all areas of operations at the facility, including engagement with stakeholders, clients and retailers to identify opportunities for enhanced sustainable performance, resulting in v4 Platinum for excellence in the areas of waste management, energy efficiency, indoor water use reduction and facility maintenance and renovations.

For example, increasing the capacity of its onsite Blackwater Treatment Plant by 30 percent in combination with water-efficient fixtures made it possible for the VCC to use 38 percent less potable water annually compared to the LEED baseline.

“When planning the #BCTECH Summit, we begin with sustainability in mind and the Convention Centre being a double LEED Platinum-certified building supports the story we share with our participants and the world,” Endean explained.

She continued, “Among our participant base are a number of Certified B corporations with the mindset to build socially, environmentally and economically aware organizations. When we create and deliver an event that makes sense for people, with local food and beverage, natural light, space and air to learn and connect in, with decisions that make sense for the planet (including the selection of this destination and this venue) and where we drive business results, leading to the third triple-bottom line of profit, we have success. The choice of the Vancouver Convention Centre supports all our objectives and we are thrilled to meet here annually.”

According to Thomas Mueller, president and CEO of the CGBC, the achievement of Canada’s first LEED v4 Platinum Existing Buildings certification once again demonstrates VCC’s leadership in the event sustainability arena.

“Through the LEED v4 Platinum certification, the VCC team is ensuring that this world-class venue continues to be operated and maintained at the highest level, delivering environmental and health benefits for years to come,” Mueller said.

He added, “At the same time, the VCC is setting an example for convention facilities around the world while showcasing Vancouver’s commitment to environmental excellence.”

Vancouver Convention Centre Receives Industry Community Service Award
The Vancouver Convention Center has been awarded the Canadian Association for Exposition Management’s (CAEM) 2018 Give Back Award, which recognizes a member organization that…
Vancouver Convention Centre, AVIXA Foundation and More Showcase Our Favorite CSR Efforts This Month
Many trade show-related suppliers and organizations are making incredible strides toward creating a more equitable and compassionate world through corporate social…
Cairns Convention Centre Plans Expansion
Queensland Treasurer Curtis Pitt recently announced that approximately A$176 million (US$134 million) of funding had been earmarked to upgrade and expand the facilities of…
People News: Vancouver Convention Centre, ECA, Albany Capital Center, Reed Exhibitions and More Tap New Leadership, Expand Teams
As we move toward the second quarter of 2021, event organizations and suppliers are announcing new hires and promotions far and wide. Check out who’s been moving forward in…
GL Events Forms JV to Build Convention Centre in Guangzhou
GL Events signed a joint venture agreement with the Yuexiu Group to build a new convention centre in Guangzhou. GL Events was represented by Mr. Olivier Ginon and the Yuexiu…
International Music Summit Goes to China
After launching events in in Ibiza, Los Angeles and Singapore, the International Music Summit (IMS) will launch its first Chinese edition later rthis year. IMS China will be…