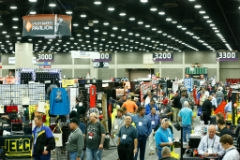 The trade show industry continued its growth streak into the third quarter of this year, with a 3.1-percent uptick, compared with the same quarter last year, marking the 21st straight quarter of growth, according to the Center for Exhibition Industry Research’s Index Report.

"We are very encouraged to see three very strong quarters of growth for the year," said CEIR President and CEO Brian Casey.

He added, "We will be watching with great interest how the year ends based on fourth quarter results, and anticipate growth to continue into 2016 and 2017."

During the three years through 2014, the exhibition industry growth generally lagged the pace of GDP, but the industry has now outperformed the macro economy for three quarters straight by a wide margin.

"The strong growth of the CEIR Total Index during the first three quarters of the year, averaging 3.8 percent, and robust employment gains during the past three months should result in a stalwart performance of the exhibition industry for 2015 as a whole, as presented in the CEIR Predict conference held this past September," said CEIR Economist Allen Shaw, Ph.D., chief economist for Global Economic Consulting Associates, Inc.

All four exhibition metrics in the third quarter posted year-on-year gains. As was the case during the first and second quarters, the strongest metric was Real Revenues, which rose an impressive 4.6 percent.

It was followed by Net Square Feet, with an increase of 3.3 percent. Exhibitors increased 2.9 percent, whereas Professional Attendance rose 1.6 percent.

Some of the shows that added to the positive numbers in the third quarter were IMEX America, which was held in October in Las Vegas and drew more than 10,000 attendees and 3,100 companies, which broke records.

Two other shows that broke attendance and exhibitor records in the third quarter were the Association of Equipment Manufacturers’ ICUEE 2015, the International Construction and Utility Equipment Exposition and PMMI’s Pack Expo Las Vegas.