Sustainability Check-In: How U.S. Convention Centers are Getting Greener 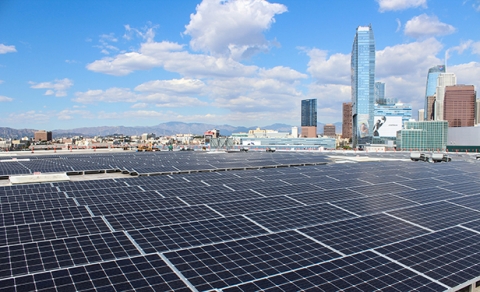 Implementing sustainable practices isn’t just good for the environment, it’s also good for business, as many convention centers have discovered. According to the 2017 Green Venue Report (the 2018 report has not yet been released), event venues are saving millions of dollars each year thanks to sustainability upgrades through energy, waste or water conservation programs.

Energy tracking for events is also improving, with 88 percent of venues surveyed reporting doing so. Yet technology is constantly changing, and what was good (or good enough) a few years ago is likely behind the times now. With that in mind, here’s a look at new sustainability efforts at some of the biggest convention centers around the country.

At the end of 2018, the installation of 15 high-speed roll-up doors on all major loading dock entrances was completed, reducing energy consumption inside the building and allowing better control over airflow and temperatures on the show floor. The center’s 6.75-acre green roof has become a sanctuary for area wildlife, including 27 species of birds since it was completed five years ago. In 2018, more than 100 bird nests were identified there and the facility’s kitchen has also harvested more than 125 pounds of honey from rooftop beehives.

Finally, a massive expansion that will include more than 200,000 square feet of new meeting room and pre-function space, among other additions, will also add a 1-acre working farm. Set to be completed in 2021, the rooftop farm will add a true roof-to-table experience for guests and is expected to yield up to 40,000 lbs. of fruits and vegetables annually.

The facility’s rooftop garden, which began as part of the West Building’s Leadership in Energy and Environmental Design (LEED) certification process, continues to grow. It now stretches 2.5 acres and yields 8,000 pounds of produce annually, which is in turn used by the center’s culinary team for meals—and even to make the exclusive MPEA Ale, brewed with hops grown on the roof. Three beehives containing more than 20,000 honey bees also reside on the roof, to pollinate the crops as well as produce 50 pounds of honey per year.

Keeping with the focus on local foods, more than a third of all food purchased at McCormick Place is local, organic or environmentally preferred, according to a facility spokesperson. This includes sustainable seafood and antibiotic-free meats.

In 2018, the Orange County Convention Center recertified its LEED Gold status with the U.S. Green Building Council and also upgraded its ISO 14001 standards from the 2004 to the 2015 standards. This certification places the center among a select group of venues to complete an extensive review of sustainability and conservation practices.

The North-South Building Improvements project, which was announced last fall and will include a 200,000-sq.-ft. multipurpose venue, 60,000 sq. ft. of meeting space and an 80,000-sq.-ft. ballroom will also be designed and built to be at minimum LEED Gold standards.

New Orleans & Company, the city’s CVB, is working closely with the convention center’s sustainability team as well as the energy efficiency program manager with the city to form Green Hospitality Nola. The group’s collective mission is to create a more sustainable hospitality and meetings industry by kick-starting a program that will combine and highlight efforts that are already in place, and work together to find ways to be a greener community. 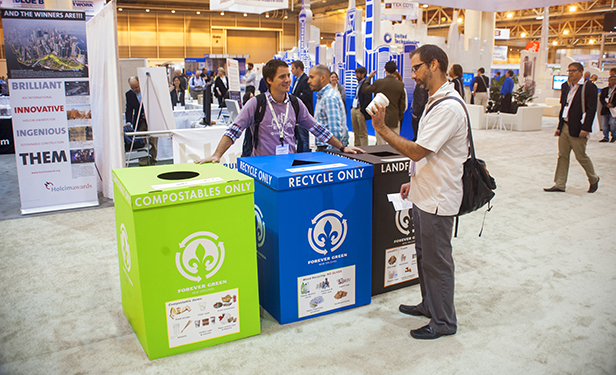 The program is beginning with a survey sent to hoteliers in the city by CVB and convention center leadership to gain an understanding of their sustainability goals and current sustainability practices. Then, they will analyze responses to see what can be done to improve efforts citywide.

In August of last year, the Convention Center named Art Shilling its Assistant Director of Sustainability, a newly created position in which he will focus on tracking, compiling and reporting on the facility’s sustainability initiatives with special focus on LEED certification.

Partnering with the Louisville Water Company, KICC is encouraging visitors to ditch plastic cups and bottles for reusable bottles through a new “Fill, Drink and Repeat” initiative with the facility’s newly constructed refillable water stations. It also plans to work with LWC to soon create a branded refillable bottle that can be distributed to event attendees.

Other notable improvements in sustainability include a massive reduction in energy use. When KICC underwent a complete renovation (and reopened in 2017), builders utilized recycled content and low-emission materials to reduce pollutants inside the building. These practices alone are expected to result in a 24 percent reduction in utility cost and a 32 percent reduction in water use.

The LACC, managed by AEG Facilities, is home to a 2.21-megawatt solar array on the roof of its South Hall. Unveiled in April 2018, the addition brought the facility’s total solar to 2.58 megawatts, making it the largest solar array on a municipally owned U.S. convention center. The move is expected to reduce the LACC’s carbon footprint by more than 2,500 metric tons per year. Late last year, the convention center banned the use of plastic straws, a progressive move that will cease the use of 250,000 straws annually.

After first implementing an energy reduction plan three years ago, I-X Center became a certified energy efficiency customer with the Illuminating Company – A FirstEnergy Company in April 2018. This year, it implemented energy-efficient LED fixtures on the 40-foot light poles surrounding the building exterior. In total, 60 fixtures were changed, and the center will continue adding energy reduction processes throughout 2019 and beyond, according to I-X Center officials.

How TCF Center, Caesars, LA Convention Center and More Are Getting Greener
Several hotel brands and convention centers are jumping on the green bandwagon to help the environment and people in need through an array of sustainability and CSR…
The Trade-Show Industry Can Get Greener! Here’s How…
My company has been providing shipping and transport cases for the trade show industry for many years. As such, we’ve operated out on the periphery, which has given us a…
How to Get Your Boss on Board with Sustainable Events
When I was in my previous career in marketing and communications, I worked on a team that planned corporate events. My role was graphic design, so I didn’t usually offer…
Huntington Convention Center of Cleveland Goes Even Greener with Energy Efficiency Upgrades
The Huntington Convention Center of Cleveland and the Global Center for Health Innovation recently has completed two significant facility upgrades geared toward improving…
Grass Keeps Getting Greener for the Golf Industry Show
At the 1928 conference of the National Association of Greenkeepers of America (now known as the Golf Course Superintendents Association of America), 350 participants gathered…
10 Unique Ways Hotels Are Getting Greener
We’ve reported a lot recently on green convention centers, from LEED status to sustainability efforts in 2019. However, let’s not forget hotels, which are also doing their…