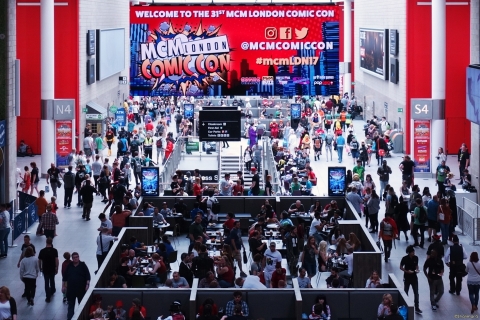 ReedPOP, the world’s largest producer of pop culture events, is adding a series of premier events across the United Kingdom to its portfolio through the acquisition of MCM Comic Con.

ReedPOP has brought one of the largest pop culture events producers in the UK into its family of leading experiential fan events.

The acquisition of MCM by ReedPOP, a boutique group within Reed Exhibitions, part of RELX Group, will take effect immediately, and its impact will begin to be seen and felt on all 2018 events.

"For nearly a decade I’ve watched with great admiration as the MCM brand grew in size, scale and quality, as well as in the hearts and minds of UK fans. I could not be more proud and humbled to team up with the MCM team to bring two world-class pop culture event companies together,” said Lance Fensterman, Global Head of ReedPOP.

He added, "The addition of the MCM brand extends the reach and influence of the ReedPOP portfolio and further solidifies our place as the number one producer of fan events across the globe. We cannot wait to work with the MCM team to build even bigger and better events for fans in the UK.”

MCM Comic Con was co-founded by Bryan Cooney premiering the show in 2002 as the London Expo.

The next few years saw London Expo grow and flourish. In 2004, it rebranded as London MCM Expo – the ‘MCM’ standing for ‘Movies, Comics, Media’; and in 2005, it took the first steps that would transform it from a collectors’ and autograph event into a comic con, with the addition of dedicated comics and anime areas plus film and TV content.

“Everyone at MCM is delighted to be joining the ReedPOP family. I have visited NYCC many times and thought how cool would it be to work with Lance and ReedPOP.,” said MCM Co-founder Bryan Cooney.

He added, “Today, all my wishes are granted. I look forward to launching MCM into a higher orbit of popular culture’s greatest shows alongside ReedPOP.”

Since ReedPOP's first event in 2006, the sold-out New York Comic Con, the group has sought to produce exceptional experiences for passionate audiences and grow the industries surrounding these passions.

This philosophy has led to burgeoning attendance, the support of major creators and publishers and partnerships with leading entertainment brands including Lucasfilm (Star Wars Celebration), Twitch (TwitchCon) and Penny Arcade (PAX).

In recent years, ReedPOP has recognized pop culture audiences emerging throughout the world, where it has produced experiences for these new fans and connected exhibitors to these hungry, unexplored markets.

ReedPOP’s previous global events have been held in China, France, Australia, Germany, India, Singapore, Korea and other territories across the globe.