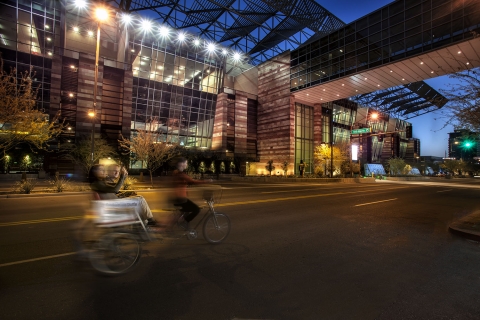 Nearly six years have passed since the $600 million expansion project was completed on the Phoenix Convention Center, providing attendees with nearly 900,000 square feet of event space.

Just steps away from downtown Phoenix, the convention center sits on a 26-acre campus and is linked to downtown and several hotels via the new light rail system.

The expansion provided several elements that positioned the convention center for the future. There is more than 300,000 sq. ft. of continuous exhibition hall space that connects the North and West Buildings, including 190,000 sq. ft. of virtually column-free exhibition space in North Building.

In addition, there is more than 150,000 sq. ft. of break out space and $3.2 million in art around the convention center.

"Since the Phoenix Convention Center's expansion, we have welcomed more than 1 million delegates to Phoenix," said Phoenix Convention Center Director John Chan.  "Our expansion, which nearly tripled the size of our facility, enables us to attract larger high profile conventions and events such as the National Rifle Association (NRA), U.S. Greenbuild International Conference and MLB All Star Fanfest.”

Touch-control screens in each meeting room provide exhibitor control of lighting, audio and background music as well as an automated “help function” that allows guests to contact the operations center if issues arise.

A football field was erected in the convention center as well, to provide a unique experience for football fans of all ages.  And with other events scheduled, including the Phoenix ComiCon, the future is  bright for the rising Phoenix Convention Center.

“In 2015, we hosted the Super Bowl NFL Experience and look forward to hosting the fan events for the 2016 College Football Playoffs and 2017 NCAA Final Four,” Chan said. “Though bookings and attendance were impacted during the recession, we are now seeing an increase in business back to pre-recession levels for this year and in the near future."