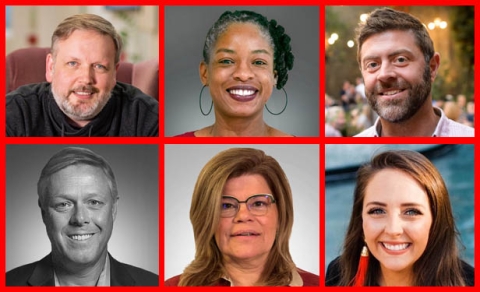 The rush to rebuild staff and grow leadership teams at trade show and event-related organizations continues full speed ahead as companies, associations and CVBs anticipate a more robust 2022. Take a look!

UFI, the Global Association of the Exhibition Industry, appointed international event management veteran Adeline Vancauwelaert as COO, effective Feb. 22. Working out of the organization’s Paris headquarters, she joins UFI from France-based global exhibition organizer Comexposium, where she served as event director and played a leading role in strategic positioning, team management and the international development of the SIAL show.

Prior to Comexposium, Vancauwelaert worked at international communication and marketing agency Sopexa as director of companies and international exhibitions, responsible for promoting and supporting the visibility of French food and beverage brands across international markets.

VISIT DENVER hired Flavia Light as its new vice president of tourism, responsible for leading international sales and marketing efforts while serving as a connector for Denver’s cultural community. She is also responsible for overseeing VISIT DENVER visitor centers and assisting with new tourism event generation.

Relocating to Denver from Orlando, Light most recently worked for GoPegasus, a tour operator, DMC and transportation company, where she served as director of strategic growth marketing and sales, overseeing international business development for the leisure and group segments. Prior to that, she spent nine years as marketing and sales director with Walt Disney World, Disney Destinations.

Twenty-year association veteran Artesha C. Moore has been appointed president and CEO of Association Forum, effective Feb. 14. She brings strong financial acumen, a deep understanding of technology strategy, an impressive history of growing membership, the successful amplification of DEI programming and the ability to drive innovation to her new role, according to Association Forum officials.

Exhibit Concepts, Inc. promoted Bradley Livesay to director of NEXT Lab, a creative team dedicated to the strategy and alignment of unique digital and virtual experiences. In his new role, Livesay will be tasked with leading the NEXT Lab team’s strategy and alignment with trade shows, museums, education spaces, marketing initiatives and interior permanent environments.

Since joining Exhibit Concepts in 2016, he has held the roles of senior digital producer for NEXT Lab and digital content manager. He previously served as digital marketing manager for Autosoft.

As national sales manager, Danielle Appley-Epstein is responsible for selling and marketing Atlanta as a premier destination for group meetings requiring 251-1,200 rooms on peak, focusing on East Coast markets and representing ACVB at events and trade shows. In her previous role as national sales manager at Omni Atlanta Hotel at CNN Center, she managed Midwest markets, working with major trade associations for some of the largest meetings and conventions in the U.S.

Amanda Dyson has been promoted to director, membership, corporate events and visitor services, responsible for leading recruitment and retention programs for current and prospective members. She will also manage industry event planning and is responsible for the daily operations of the visitor information center in downtown Atlanta’s Centennial Olympic Park. Her tenure with ACVB began in 2004 as marketing manager before holding roles in international and domestic tourism and joining membership in 2017.

As manager, facilities, Janine Douglas will oversee all ACVB facilities, including the visitor information center at Centennial Olympic Park, and manage vendor relations. She joined ACVB in 2009 as administrative assistant, corporate events and development as well as community and governmental affairs, supporting three vice presidents. She was promoted to coordinator in 2005 and has provided support to some of ACVB’s major events.

International Market Centers (IMC) hired Caroline Russell as its new design services manager, focused on driving Open Daily and at-market attendance of designers and home retailers to Atlanta’s AmericasMart, and providing on-site customer service. Besides serving as the direct liaison between the gift, apparel and home décor marketplace and the local design community, with a specific focus on Open Year Round showrooms, she will also serve as concierge to AmericasMart visitors in the Designer Workspace.

Russell joins IMC with two prior years of experience as a client services representative at Ferguson Enterprises, where she assisted interior designers in selecting lighting, appliances and plumbing.

Before joining Konduko, Allenby was global head of data and digital innovation at RX. He brings an extensive knowledge of event technology and technological innovation in businesses as well as delivering on customer success. Allenby has previously worked for brands including United Utilities, Centrica and TalkTalk.

Prior to joining Konduko, D’Entremont spent the past 10 years working at U.S.-based Adstrategies, where he oversaw media sales and sponsorship for a consumer event portfolio of more than 100 events. He has worked on a multitude of events during his career and spent 15 years as both a B2B and B2C show producer for Advanstar Communications (now Informa Markets) and Marketplace Events.

Helen Sheppard has been named RX’s global sustainability director, a newly created role in which she will focus on RX’s commitment to the UFI Net Carbon Zero Event pledge, signed in November 2021. She joins the global show organizer on an 18-month secondment from RELX, where for 10 years she has served on the company’s corporate responsibility team, most recently as global corporate responsibility and inclusion manager.

Destination DC (DDC) appointed William Adams as its new director of convention sales, responsible for driving convention business and developing sales policies and programs to bring meetings of all sizes to Washington, D.C. Working alongside DDC’s vice president of convention sales and services, Melissa A. Riley, he will also oversee the CVB’s convention sales team.

Bringing more than 15 years of experience in the attraction, tourism and hospitality industry, as well as a successful career in convention sales to his new role, Adams most recently was national sales manager with the Las Vegas Convention and Visitors Authority (LVCVA), where he oversaw 800 active accounts and spearheaded the CVA’’s events, sales missions, site inspections and fly-ins.

Tim Collett has been promoted to managing director after previously serving as global head of live events, responsible for several groundbreaking events and supporting the rapid expansion of WRG’s virtual event offering. In his new role, Collett will focus the agency around five priorities: innovation, experience design, sustainability, talent development and DE&I. Prior to joining WRG in 2017, he served as vice president executive producer at Jack Morton Worldwide.

Within the agency’s leadership team, Collett will be supported by Head of Environments Mark Jackson, who is focused on leading the growth of WRG’s live and virtual environments capabilities. Jackson has been at WRG for 20 years and has overseen some of its award-winning exhibitions.

Bringing more than 20 years of experience in customer, digital technology and operations leadership in both growth and more established organizations to his new role, Davies previously led sales, design and customer service at mobile phone and internet provider Belong. He also served as head of operations delivery for Jetstar and brings strategic capability from his time at Boston Consulting Group.

Bringing extensive technical knowledge and more than a decade of experience with large citywide events and conferences to his new position, Cascio began his career in the live events industry in 2006 as a computer technician and evolved into roles managing large-scale events as a computer and I.T. project manager as well as a meeting room project manager.

VisitPITTSBURGH has named Susan Klein its new chief marketing officer, effective Feb. 14. Bringing more than two decades of brand building and management to her new role, she joins VisitPITTSBURGH after four years as the head of content marketing for marketing and branding agency Doublespace, Inc.

Prior to Doublespace, Klein spent eight years in San Francisco, most recently serving as head of marketing communications and visitor services for the Fine Arts Museums of San Francisco, and before that, founded Oculus Marketing, where she served as its chief marketing officer. She has also held marketing and branding roles with Morrison & Foerster LLP, Citibank Consumer Assets Division, Morgan Stanley and Mastercard.