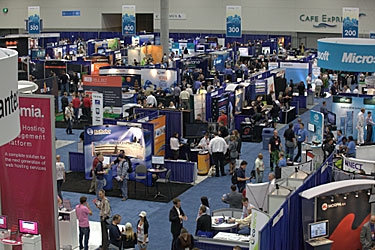 Penton has acquired iNET Interactive, an event and digital information company that focuses on the cloud, hosting and data center segments of the technology sector and includes HostingCon and Data Center World trade shows.

These segments are expected to experience annual growth of 25-30 percent in the years ahead, according to industry experts.

“A core element of our strategy is creating scaled positions in advantaged sectors.  This acquisition doubles our tech sector footprint, and does so in exceptionally fast growing segments.  The acquisition of this high quality business allows us to take immediate advantage of the rapid growth being experienced in this segment,” said David Kieselstein, Penton CEO.

He added, “Moreover, we’ll be able to accelerate iNET’s growth as we leverage our excellent shared service growth capabilities.  This is a proven model at Penton, and we’re excited to have found a perfect fit in iNET.”

Here are some of the assets included in the acquisition:

•        The premier hosting tradeshow series (HostingCon), including events in the U.S., China, India and Asia

•        The largest directory of resources for web developers

•        One of the largest database administrator communities with over 550,000 members

•        The largest data center industry association (AFCOM) with over 40 chapters and 4,500 data center members worldwide, including more than half of the Fortune 500

“The iNET team has worked diligently to build iNET into the strong company it is today.  We are proud to have been recognized for seven consecutive years on the Inc. 5000 list of fastest-growing, private companies,” said Troy Augustine, iNET CEO.

He added, “Now, as a part of Penton, iNET will have access to a broad array of corporate capabilities that can be leveraged quickly and effectively.  Simply put, Penton can take iNET to the next level of growth.”

iNET will join other leading Penton Technology properties such as MSP Mentor, The VAR Guy and IT Connections franchise that serve IT Professional, IT Channel and Business Decision Makers under the leadership of Penton Group President Sanjay Mutha, as Augustine transitions from the business.  “Troy has built an excellent business, and I know he will have continued success as he moves to his next entrepreneurial venture,” said Mutha.

Penton has made several other acquisitions during the past few years, including the Farm Progress Group in 2012 via Fairfax and Aviation Week in 2013 via McGraw Hill Financial.

SunTrust Robinson Humphrey acted as exclusive financial advisor to iNET Interactive.  The financial terms of the transaction were not disclosed.