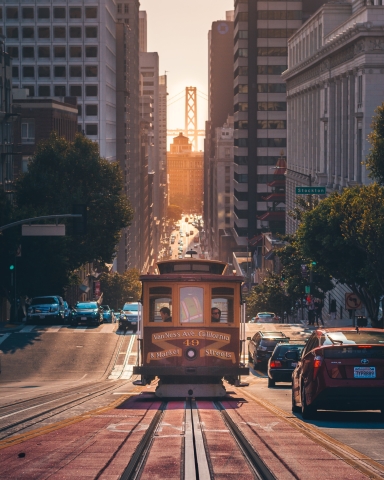 PCMA Convening Leaders, the annual PCMA conference for event planners, is coming to San Francisco on Jan. 5-8, 2020. Not only does this mark a 20-year anniversary for the city — the last time Convening Leaders was held in San Francisco was 2001 — it is also perfectly timed to showcase the revamped and expanded Moscone Center.

Convening Leaders draws approximately 5,000 attendees with a nearly even split between event planners and industry suppliers. The majority will be seeing the new version of Moscone for the first time. Meanwhile, the San Francisco Travel Association intends to show visitors all the best that San Francisco has to offer.

“[This year] is going to be a record year in terms of room nights at Moscone,” David says. “We will have more rooms generated from groups than we have historically. And that’s the direct result of the expansion.”

He adds that San Francisco Travel has gotten great feedback from the clients who have used Moscone within the past year. Of particular note are the natural light and the ease of getting back and forth between the North and South Halls thanks to the new pedestrian bridge over Howard Street. The new outdoor balconies are also garnering kudos.

Hotel Blocks: Spreading the Wealth Around the City

When you come to San Francisco for a citywide convention, you may have to use more hotel blocks than you potentially would in some other destinations. For example, PCMA offered rooms at 16 properties for Convening Leaders.

The biggest issue with hotel inventory for large groups is the robust business travel market, David explains. Because of the high rate of weeknight transient bookings, hotels are offering fewer rooms on peak nights, which then drives the business out further (beyond Union Square).

David looks at this as a positive. “It spreads the wealth around the city,” he says. “It’s very easy to get around San Francisco because the city is relatively small. There are so many hotels within walking distance of Moscone, plus you have hotels at Fisherman’s Wharf and down on the Embarcadero that aren’t participating in these citywide conventions.”

Tourism health also drives prices up. As average hotel rates in San Francisco are among the highest in the U.S. (placement varies from study to study), spreading blocks out among a larger number of hotels also allows show organizers to offer their attendees a range of price points.

“In the 20-plus years that I’ve been in the industry in San Francisco, it’s always led the country as one of the most expensive cities to be in — but there has also always been a value related to that,” David says. “We have natural beauty, fabulous attractions and great venues for hosting functions. You’re getting all these benefits in a world-class city with a tremendous culinary scene.”

Over the past two years, San Francisco Travel has raised concerns about the impact of the city’s homelessness problem on convention business. In 2018, a Chicago-based medical convention announced that it was pulling out of San Francisco for future events, citing “dirty streets” that made attendees feel unsafe. And earlier this month, Oracle announced that it was moving its annual Oracle Open World to Las Vegas’ new Caesars Forum. Although Oracle officials said hotel room costs were the primary reason for the move, they also referenced poor street conditions.

At a joint press conference with Breed and San Francisco Travel on Dec. 16, the San Francisco Chamber of Commerce announced its 2020 StreetCareSF campaign. The mayor has asked each of her departments to contribute budget to the initiative, which will provide street safety tools to small businesses and mobilize residents to call upon local supervisors for better street cleaning.

“San Francisco is a world-class city, but it’s no secret that we need to address the challenges we see on our streets,” Breed said. “We want everyone who lives, works and visits here to experience the best that San Francisco has to offer.”

San Francisco Travel is also taking steps to help ensure Convening Leaders’ attendees experience the best of the City by the Bay.

“We work with city hall, public works, the police, the department of public health, the mayor’s office,” David says. “Efforts are definitely stepped up to make it cleaner, safer, have a more visible presence of police, people picking up the garbage, power washing in the streets, etc. for large conventions.”

San Francisco Travel also provides walking maps from each of the major hotels for citywide conventions to make it easy for attendees to find their way to Moscone along the safest, cleanest and most direct routes.

Convening Leaders attendees will get to experience far more of San Francisco than just the Moscone Center and nearby hotels.

The conference welcome reception will take place at Pier 48, a Giants Enterprises venue near Oracle Park. The event will showcase highlights from various areas of the city, including the Mission, Chinatown, the Castro and more of San Francisco’s legendary neighborhoods.

The early-morning Fun Run/Walk will start at the ballpark’s Willie Mays Plaza and traverse the open-air promenade level. Participants will have views of the Bay Bridge, the Ferry Building, Embarcadero waterfront and San Francisco piers.

The fundraising Party With a Purpose will be at The Masonic, an auditorium that is part of the California Masonic Memorial Temple complex. Live music will be provided by PDA Band. Often used as a public concert venue, the mid-century modern Masonic was built in 1958.

“Chase Center is available for groups for concerts, shows or large-scale general sessions,” David says. “It’s really a phenomenal venue. The building itself and the area around it is not like typical arenas that I’ve seen before. It’s very user-friendly and gives guests a great sense of arrival when they walk in the door.”

In addition, a number of organizations are hosting by-invitation events and receptions in various locations throughout the city.

“I think the Convening Leaders group is going to love San Francisco,” David says. “They’ve got a really strong hotel package. The conference has great programming, and I think people just being able to see and experience the new Moscone Center will be a big hit. And we’ve got these great evening functions happening as well.”