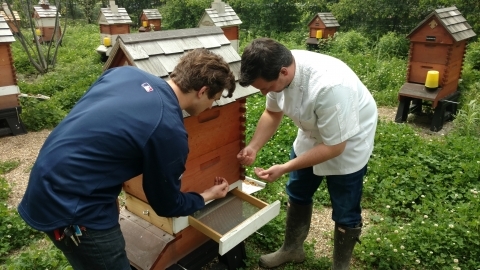 How many convention centers can boast having their very own farm, not to mention a slew of beehives pumping out delicious honey for in-house menus and catering? And out of those select few, how many facilities also have an enthusiastic young college intern ready and willing to help with beekeeping and farmhand duties?

The Huntington Convention Center of Cleveland is fortunate enough to be such a venue, with a sustainable working farm situated on a quarter acre of land at the north end of the property.

Operated by Levy and SMG, the “Real FarmVille” is home to 500,000-1.5 million honeybees occupying 13 hives that generate more than 2,000 pounds of honey annually; 26 chickens providing about two dozen eggs daily (accounting for a quarter of the facility’s total annual shelled egg use); a variety of raised produce beds featuring seasonal greens, herbs and vegetables, and three Mangalista heritage breed pigs.

As part of his summer internship for Levy, the HCCC’s food and beverage provider, Ohio State University at Wooster Business Management Undergrad Andy Mondello will be working closely with the facility’s bees for a special research project as well as lending a hand with basic farmhand duties.

“Andy will bring his knowledge and passion for bees and beekeeping to our Real FarmVille this summer as well as conducting important research for Ohio State University,” explained Matt Del Regno, executive chef for Levy.

He continued, “He will ensure that our property is show-ready at all times for the thousands of guests who love to view the farm, learn about sustainable farming and growing practices, and see where much of their food is coming from.”

During his studies at OSU, Mondello has developed an interest in entomology under the tutelage of Professor Reed Johnson with the Ohio State Agricultural Technical Institute (ATI).

During the summer, professor and student will be busy conducting bee pollen collection as part of a study of bees in urban environments and the types of pollen they collect in and around downtown Cleveland.

The concept is simple: the bees fly anywhere up to approximately three miles from the hives, collect pollen from various sources, including clover and buckwheat, then return to their home base at the HCCC.

Pollen traps placed in two of the hives collect pollen that drops off the bees as they reenter the hives, pollen that is then measured by the OSU researchers to determine its origin.

As an active member of the OSU ATI Bee Club and someone who has worked with 30-40 hives in the ATI Bee Lab, Mondello is excited about his summer internship at Real FarmVille, work that will not only help him earn college credit but also provide invaluable hands-on experience as he considers his future career.

“I would ideally like to work here as long as possible and also start a side business as a beekeeper,” Mondello said.

He added, “I plan on having a bee business in the future where I can sell my own honey. I really like it here and people have really welcomed me. This is a perfect place for my internship!”

Mondello also will be spending his summer feeding and caring for the farm’s hens and pigs, as well as tending to the vegetable and herb gardens that produce corn, beans, lettuce and tomatoes for the convention center’s in-house recipes and catering menus.

But the young intern’s summer endeavors wouldn’t have been possible without Del Regno, who dreamed up the idea of an onsite farm when the convention center opened in June 2013, and worked with facility management company SMG to place bee hives on what started as bare gravel plot and evolved into the fruitful boutique operation it is today.

Situated just outside the windows of the facility’s Grand Ballroom, Real FarmVille was a much photographed and ogled spectacle among the 15,000 credentialed reporters covering the 2016 Republican National Convention at the HCCC, according to convention center officials.

The creation of a sustainable onsite farm also played an important role in helping the HCCC achieve its sustainability goals and LEED Gold certification, which it was awarded in 2014.

According to Del Regno, the vegetable plots now grow more basil than the kitchen can handle; the two-dozen eggs laid daily by the site’s busy chickens are used in breakfast sandwiches and served poached, and the honey produced by the hives is used in honey mustard vinaigrette dressing, house-made granola bars and cheese boards, and in convention center menus.

The two Hungarian heritage sows, Sage and Honey, and a boar named Eddie came from local farms. The sister sows will be used for breeding and will not be slaughtered.

Since a small urban farm like Real FarmVille can’t be expected to provide the massive amounts of food a bustling convention center typically requires, Levy, in keeping with its commitment to sustainability and social responsibility, partners with Chef’s Garden, a local, family-owned, 300-acre sustainable vegetable farm located in Huron, OH, and makes every effort to source responsibly raised food products from local farmers whenever possible.