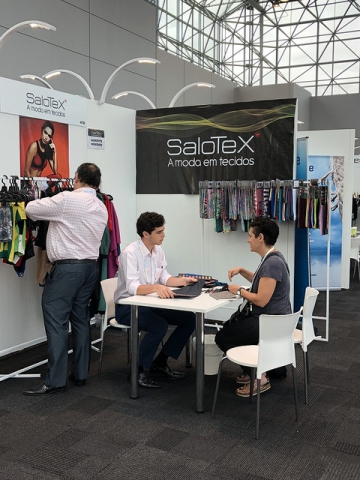 Does the shirt you’re wearing right now keep you cool in the summer and warm in the winter? Can it go many wears without washing and not stink? According to the organizers of a new U.S. trade show, very soon technology in everyday clothing will be the norm rather than the exception.

PERFORMANCEDAYS has been held in Germany for the past 10 years and showcases functional technologies in fabrics. Historically, it has been attended by outdoor brands that use thermal technologies, reflective materials and other functions in their products.

“About a year and half ago, I was at the show in Germany and I noticed sportswear brands were attending in addition to the outdoor brands,” explained Steve McCullough at Reed. “I knew that the show should come to the U.S. and specifically New York, because this is where fashion meets function.”

Attendees of the Functional Fabric Fair included teams from large brands such as Target, Ralph Lauren and others. The 1,159 attendees from 29 countries had the opportunity to experience the breadth of technologies available through exhibits and complimentary showfloor education that focused on trends and teaching designers how to incorporate those trends.

Exhibitors brought everything that today’s fashion industry is buzzing about, from thermal threads to 4-way stretch fabrics, to anti-order technologies as well as products that improve sustainability throughout the production process such as waterless color systems and recycled down options.

“Everybody’s looking for something extra to put into their products,” McCullough said. “Mainstream adoptions of these technologies will be immediate.”

In fact, some brands, such as Gap, which includes Brrr’s cooling technology and Tommy Hilfiger, which recently created an ad showing Rafael Nadal playing tennis in a wool suit containing stretch technology, are already are using them.

At the show, attendees wasted no time getting down to business and engaging in quality conversations with exhibitors, who were pleased with the turnout.

Representatives in the Thermore booth, which was showcasing its ecodown fibers (which are cruelty-free and made from recycled PET bottles), said they were exhibiting to gain more visibility in the U.S. and had been making good contacts at the show.

Similarly, Heather Manuel, director of sales at Outlast, which was showcasing its heat management technology, said that because this was the inaugural event she didn’t have clear expectations as to the quality of people attending but was happy with the crowd.

“It has been an excellent show for us,” she said. “Our needs have been met.”

Next year, Functional Fabric Fair will take its focus on sustainability even further by addressing one of the fashion industry’s biggest concerns – waste.

“At next year’s show, all of the booths will be made out of recycled fabric and will be recycled again at the end of the show so that there will be no garbage,” McCullough explained.

He continued, “Holding the event at the Javits Center also enhances our efforts along these lines, because their efforts, including a green roof and solar panels, help us leave less of a carbon footprint.

The Functional Fabric Fair will return to the Javits Center July 22-23. Who knows, maybe by then you’ll be able to run a marathon in your wool suit!