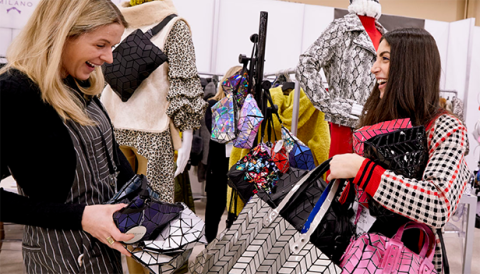 The fashion industry is evolving fast, and the biannual MAGICfashion trade show is keeping up, with everything from on-trend iridescent signage to mobile app registration to sustainability practices.

For the first time in more than 10 years, all the shows comprising this massive marketplace –  dubbed “One MAGIC” – were held together at the Las Vegas Convention Center Aug. 11-14, eliminating the need for buyers to hop between venues as they had in the past.

“The timing is right for us to move the entire fashion community together and I think we’ve accomplished that,” said Tom Nastos, chief commercial officer for the Fashion Group of Informa Exhibitions, which owns the show.

Nastos noted that the overall square footage is “close to its traditional size square feet and is at capacity.” Attendance was also on par with previous years at about 80,000.

The event is poised for growth with the $935 million expansion of the LVCC opening at the end of next year. In the meantime, the MAGIC shows slated for February 2020 will be held at the Mandalay Bay Convention Center for one time only.

One of the key elements of the new experience was the One MAGIC mobile app. Along with the expected functions of setting an agenda, matchmaking and wayfinding, it was also the main way to pre-register. Attendees could then scan the generated QR code on-site and receive a bracelet with an RFID tag, which they’d scan to enter the show, eliminating traditional badges. Attendee types were distinguished by bracelet ribbon color.

“The app is the beginning of our digital strategy that we’re looking to extend not just throughout our shows but as a way of engagement with our customers year-round,” Nastos explained. 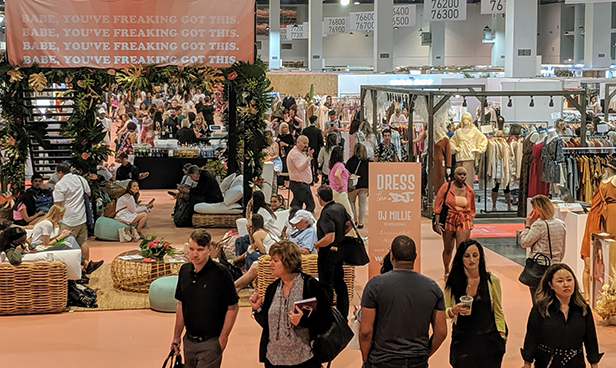 Much of the talk on the showfloor was about sustainability in the fashion industry fueled by the consumer desire for responsibly sourced products, environmental concerns and the overall move towards the shared economy. Some of the most popular talks were on the rise of online secondhand retailers such as The RealReal, Poshmark and thredUP.

Thus, it was only fitting that the fashion industry show would launch a sustainability initiative –  Good4Fashion – in line with the United Nations’Conscious Fashion Campaign, to focus on social responsibility, responsible production, ethical practices and eco/animal-friendly practices.

“Our customers are making decisions based on sustainability and we support that,” said Nastos. He said the show is working with LVCC to reduce electric usage and runs its own recycling programs. Best practices will be implemented across the company’s portfolio.

On the floor, there was excitement about the move towards one community but not so much about the badgeless system.

“Wristbands don’t really help to identify customers,” said exhibitor Emma Birlea with California-based apparel company Stitch Note USA. “Not being able to see a buyer’s name and where they’re from made for some awkward conversations. You have to ask if they’re your account.”

Exhibitor Marco Feelisch with Germany-based leather bags company Buckle and Seam was thrilled with the traffic and the level of interest from attendees in part thanks to the One MAGIC move but was also having a hard time with names.

“I wish there was at least an option to print a badge,” Feelisch said. “I won’t be surprised if people (make) their own next time.”

Ali Trapp, an owner of Point of Origin boutique in Texas, liked the fact that she didn’t have to wear a badge even though she commented that “there still needs to be some way to identify people.” She used the MAGIC app to navigate around the new layout of the shows and appreciated that it made the transition to a new venue easier.

The next edition of MAGIC is set to take place at the Mandalay Bay Convention Center Feb. 5-7, 2020.

MAGIC Fashion Marketplace To Unify Under One Roof
The biannual MAGIC fashion trade show is reinventing itself by offering a new one-stop shopping experience at a single venue, following feedback from MAGIC buyers.  Starting…
Inaugural Las Vegas Food & Beverage Industry Week Will Feature Four Premier Shows Under One Roof
Leading trade show organizers Emerald and Questex have teamed up to launch the inaugural Las Vegas Food & Beverage Industry Week, featuring four premier food and beverage…
International Market Centers, AmericasMart Combine Under One Umbrella
International Market Centers and AmericasMart, two operators in the furniture, gift, home decor, rug and apparel B2B industries, have entered into an agreement to form the…
Emerald Unveils Xcelerator Division to Drive Growth Via Innovative New Brand Experiences
Leading event and media company Emerald formed a new division designed to accelerate its market diversification strategy by launching dynamic brands that curate year-round…
Creativity and Innovation Aren’t One and the Same in the Trade Show Arena
The words “creative” and “innovative” are often used interchangeably in the business world, from startups and established corporations to even trade shows. But are these two…
Data Drives Better Matchmaking
In my last blog post, I discussed how several virtual platforms and standalone matchmaking services tout the promise of highly effective matching between attendees to…