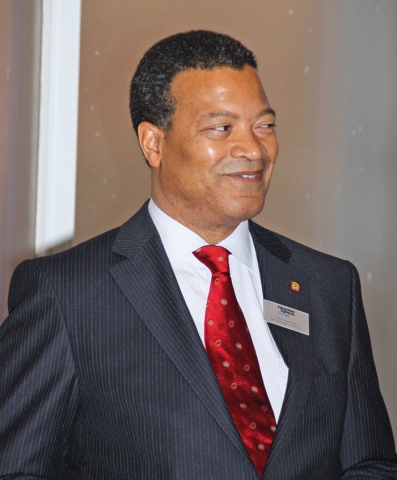 As part of an ongoing series, TSNN Reporter Traci Browne has been profiling trade show executives and asking them probing questions like it’s the day before your show and there’s a zombie apocalypse – what would your first thought be? She got Mike Blackman to play along this month in our interview series. Traci met Mike at the SISO Executive Conference in Atlantic City, and said, “I knew right away he would be the perfect interview subject.”

Traci Browne: Where did you grow up? What was your adolescent experience like?

Mike Blackman: I was born in Guyana, South America, (that’s next to Brazil and below Venezuela, I always have to explain that to people in Germany who constantly mix it up with Ghana Africa) but left there when I was six years old. I basically grew up in London, and if you ask me how I describe myself (I live in Germany now), I would always say British ( I think that my accent gives it away). I was lucky to have parents who had foresight about career and gave me the opportunity to study even from an early age (can you imagine, at the age of 6 my mother had me doing elocution lessons to lose my Caribbean accent so that I might have a better career chance in the future). I went to a very English Grammar school and really enjoyed my time there. The building and teachers were very reminiscent of the “Harry Potter” movies (without the owls, wizards and broomsticks). I think that it was here that I became an extrovert and wanted to be successful and in the limelight.

TB: What was the first show you went to? What do you remember most about it?

MB: The first-ever exhibition I attended was the Ideal Home Show in London. What fascinated me most was the fact that they built quite a few real multistory, fully furnished houses inside the venue. It was a great place to buy all the latest gadgets that ended up in a kitchen drawer a few weeks later only be discovered again when you moved out.

TB: What was your first job? Did you learn any valuable lessons or tools that you have brought with you into your current career?

MB: My first job was at Reed International, Corporate HQ, in the accounts department. The corporate stuff was great, but I hated the general accounts work. I was fighting every afternoon to stay awake, but it I learned a lot there that I need now in my management role. I discovered very soon that my forte was in sales. Standing up in front of people and getting a buzz when they said yes to what I was selling.

TB: When did you become interested in working in the industry? How did you get started in the trade show industry?

MB: I had a good career in advertising sales and was very successful at it. I actually did not particularly look for a career in the trade show industry, it found me. I was working on a UK computer magazine that sponsored a show, the PCW Show, and discovered that exhibitions were a great place to meet and sell to customers. I always came back from shows with a bag full of orders. One day, (in February 1984) a headhunter called me to say that the show management (Montgomery’s) were interested in having me join them. I haven’t looked back since.

TB: Do you have any hobbies? (woodworking, birding, knitting, Herpetoculture)

MB: I like cars (I have one very fast and one very slow, a friend told me years ago if you want to show off you have to drive slowly and be seen). I am avid skier and snowboarder (the mountains attracted me to live in Munich and I was a ski instructor in my misspent youth).  I skateboard with my sons occasionally not so often now after I bloodied my knee in a fall and was embarrassed to say how it happened (my wife said it serves me right for skateboarding at my age).

TB: Do you have any pets? We want to know all about them if you do.

MB: I have a dog, he is a Bearded Collie and loves me to death. We have had him for 7 years and really fits into our family (we sleep late on Sundays and so does he). He greets me every morning when I get up and normally he waits for me at the gate when he hears my car and is like a bouncy ball waiting for me to come in. This week, I arrived back from the U.S. and my wife came to the airport with him to collect me. At the airport arrivals he was so excited when he saw me that I was almost knocked over by him jumping all over me.

TB: What’s on your iPod?

MB: I use my iPad mini, and it has almost everything I need. I have online access to all my important documents, lots of nifty tools, some games( Backgammon, Chess etc) for when I get bored traveling and several hundred songs in multiple genres, Latin, Classic, Rock, Ska, Soul, R&B , Jazz, Lounge, Pop etc. I have very varied musical taste and what I listen to depends on my mood.

TB: It’s the day before the show and the CDC has just announced a zombie apocalypse. Your first thought it to …

TB: If time travel was possible, where would you go and why? (You cannot choose the future because it hasn’t happened yet and there is the possibility you may have to stay put wherever you travel to… So answer wisely.

MB: I have never ever considered what would be my favourite time in the past, but I guess the early to mid 19th Century as there was so much new happening, the second Industrial Revolution. Many of today’s modern inventions saw there evolution in this time and being a technology fan I am sure this time would have excited me as much as today does. Coincidentally it was also the time of the first “World Expo” (the precedent to all international fairs) at the Crystal Palace in London (1851)

TB: Name three people you would love to have lunch with? (Living, dead, famous, infamous, unknown …)

MB: Nelson Mandela, I read his autobiography and was fascinated by his resilience and to see from his beginnings that he achieved something in becoming (President of South Africa) that no one would have dreamt possible.

Nicholas Negroponte, professor and co-founder of MIT labs, for me, he is the ultimate “Futurist”. I have been to a couple of his speeches and his projections of what will be possible in 5 or 10 years is really awesome.

Alexander the Great, a true leader and strategist and military commander. He created one of the largest empires ever and was never defeated.

TB: What are your future goals? (Career, education, travel, etc.)

MB: I believe that I have a fantastic job. I always tell my children that the most important career decision will be to find a job that they enjoy so that they don’t have to work. Career wise my goals are to grow our existing events and expand our company where there are suitable and profitable opportunities. Education now is the key aspect for my children and I just need to ensure that I can finance that.  I have never been to Japan and it is still on my list of countries that I want to visit (the culture and history fascinates me). I have in the recent years been researching my family history and have not revisited Guyana since I left in 1964 so now I am planning a trip back to see what its like now and to show my children their roots.

Thank you Mike for entertaining us and giving us some insight into what makes you so successful and a great guy to hang out with. Good luck getting those kids through college, and we hope to see some pics from Japan and Guyana soon.