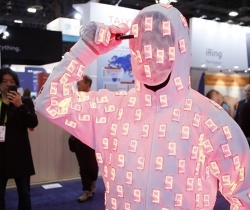 CES2018 set a record with 63,784 international attendees - more than a third of the entire show attendance - according to a final audit report that will be released by the Consumer Technology Association (CTA), owner and producer of CES.

This is the second consecutive year attendance has been over 182,

000 as the show expands to represent every major and emerging industry. Additionally, 1,079 speakers participated in CES keynotes, panels and conference sessions including more than 300 women speakers. Highlights of the audit can be found on CES.tech.

According to a preliminary report released by the U.S. Department of Commerce, international travel to the U.S. decreased by 3.8 percent in 2017.

CES 2018 showed no signs of following this trend as international attendance at the show increased by 5.9 percent from CES 2017.

CES is the largest and most influential global technology event that highlights life-changing and transformative tech that improves lives. Some of the most innovative tech trends from the CES 2018 show floor include: 5G/connectivity,artificial intelligence, C Space, smart cities , sports tech, startups and vehicle tech.

The CES audit is conducted by Vault Consulting, LLC, certified by the Exhibition and Event Industry Audit Commission (EEIAC) to perform audits.

The CES audit will provide absolute verification of exhibition records, including direct on-site observation, examination of registration systems and testing of attendee records.