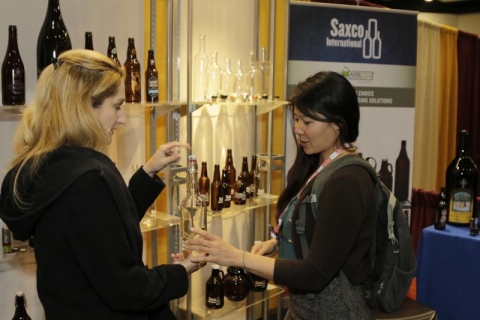 Even after a public attack by Budweiser during Super Bowl 2015 mocking craft beer drinkers, it didn’t seem to faze those who are in the industry at all, with the recent Craft Beverage Expo selling out its showfloor.

In its second year, CBE 2015 not only gathered professionals in beer, wine, spirits and cider, but it also expanded its audience to include mead, sake and soda segments.

She added, “We know these craft beverage producers are extremely busy and can’t easily set aside time for professional development. We wanted to make sure CBE 2015 had everything they’d need to keep them competitive and up to industry standards for the entire year.”

CBE also added to its curriculum, offering a total of 26 breakout sessions presented by 72 experts touching on marketing strategies, business development and real solutions to the specific problems both big and small craft beverage producers face on a regular basis, according to show organizers.

The biggest CBE 2015 attractions were the two town-hall style general session panel discussions. Led by industry leaders such as Ralph Erenzo, co-founder of Tuthilltown Spirits, Joe Wagner of Copper Cane Wines & Provisions and David Walker, founder of Firestone Walker Brewing, each focused on facilitating collaboration amongst the robust craft community beyond show walls to further strengthen the efforts of small batch producers across the country. “

A lot of what CBE revealed is how the craft beverage industry has a lot more crossover than people would think,” said Ted Huber of Starlight Distilling and CBE keynote panelist. “We have the same common goals, to make great products and find ways to get those products out to new consumers. So it’s natural that we have a lot of the same problems, same issues getting our products to the marketplace, dealing with restaurants and dealing with issues on-premise, off-premise.”

Fellow CBE keynote and owner of Oskar Blues Brewing, Dale Katechis added, “Regardless of what space or beverage industry you’re in, there’s a lot to be learned at CBE on daily aspects of running a business.”

The third edition of Craft Beverage Expo will be held May 18-20 in Oakland, Calif.

EXPO MANUFACTURA Celebrates Steady Uptick in Attendance, Showfloor
Reflecting the dynamic growth of the manufacturing industry in Latin America, EXPO MANUFACTURA, the annual trade show and conference for the manufacturing and processing…
Greenbuild International Expo and Conference Celebrates 15 Years with Sustainable Showfloor
Greenbuild International Expo and Conference was held Oct. 5-7 at the Los Angeles Convention Center and brought in more than 18,000 attendees and 530-plus exhibitors for its…
IAEE’s Expo! Expo! Annual Meeting & Exhibitions Breaks Attendance, Showfloor Records in Baltimore
“Charm City” lived up to its name, and then some, when more than 2,500 attendees flocked to Baltimore, Md., last week for the International Association of Exhibitions’ Expo!…
Craft & Hobby Association Mega Conference and Trade Show Celebrates 75 Years
The CHA Mega Conference and Trade Show, the annual show for the Craft & Hobby Association that was held Jan. 7-12 at the Anaheim Convention Center, celebrated its 75th…
E. J. Krause Partners with Unmanned Autonomous Vehicle Systems Association, Tesla Foundation on 2nd Annual International Drone Expo
The  Unmanned Autonomous Vehicle Systems Association, The Tesla Foundation and E.J. Krause & Associates will team up to produce the 2nd annual International Drone…
Key Exhibitors Opt Out of E3 Expo Showfloor in June
The Electronic Software Association’s E3 Expo won’t have some key gaming companies on the showfloor – such as EA and Activision – when the show opens its doors in June at the…