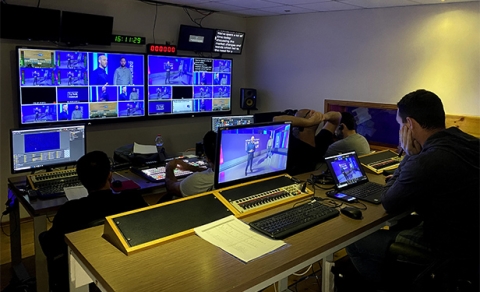 It was a dark and stormy night. The internet connection in Maor Ezer’s Israeli home kicked out only for the senior vice president of marketing at WalkMe to return to a Zoom call via a mobile hotspot.

The scenario speaks to 2020’s challenges and the rewards that can be reaped by those agile enough to quickly adapt from business as usual.

In the case of WalkMe, a digital adoption platform, the decision was to build fast, with company leaders like Ezer believing their product is a solution to challenges that have been amplified during the pandemic.

Conceived when CEO and Co-founder Dan Adika spent two hours walking his mother through a mobile banking site, WalkMe’s mission statement is “bridging the gap between humans and technology,” Ezer explained. He noted statistics demonstrating that many people forget training from a seminar within one day.

WalkMe is designed to ease the interface experience, with its WalkMe Workstation serving as the flagship product. The software works with other apps—Google Calendar, SalesForce, etc.—to streamline the process to go from Point A (the idea you have) to Point B (executing that idea).

Operations can be as simple as scheduling vacation or as complex as rolling out a new marketing initiative. Real-time communication essentially eliminates the need for email when presenting feedback, an important feature as international organizations coordinate efforts across multiple continents and time zones.

WalkMe, for instance, has staff in Israel, the U.K. and the U.S. at different points throughout the year.

“Think of WalkMe as a glass layer on top of any app,” Ezer said.

The software builds trails your system will follow, transforming a multi-step process into a one-click move. The technology is built to identify when that trail of crumbs break down (a new password or url, for instance) and either fix itself or alert an actual human to make the correction.

The platform has already won awards for allowing employees to maintain a proper workflow during the pandemic.

WalkMe launched a coming out party of sorts last March. After eight years, WalkMe was ready for its first user conference: WalkMe Realize, to be held in San Francisco. Half of the company was involved, with many expected to make the international trip.

Five days before the event, the company was forced to go virtual. In doing so, it immediately became a test-case for what conferences would like in 2020. Extremely early in the pandemic and without the benefit of watching other virtual shows go on, the team scrambled in Israel and California to produce a high-end show.

Even before Zoom fatigue, Ezer said WalkMe was looking to go beyond the standard video experience. The company rented out studios and spent 10 hours recording content at a quality level similar to “Good Morning America,” Ezer said. Some live content was broadcast as well.

The result was a 500-person foray into events that turned into a 3,000-attendee bonanza, including viewers on LinkedIn Live. A 250% increase in registration materialized in the five days between transitioning the event from live to virtual.

Metrics suggest the technology company proved savvy in its marketing:

“Honestly, I didn’t think we could pull it off,” Ezer admitted. “We juggled a lot of balls.”

Ultimately, the experience became a case study in how to build the platform’s reputation, reach and customer base.

Looking to capitalize on a chance to be the right system at the right moment, WalkMe initiated multiple events in the past year. Each targeted specific sectors—potential clients. Some may be suited for salespeople, others for human resources or IT departments.

“Our president likes to say, ‘We don’t water the garden with a hose, we water it with a lot of teaspoons,” Ezer said.

While not yet a giant in the field, WalkMe’s clients include roughly 60% of the Fortune 100, Ezer said. IBM, PwC, Walgreens, HP, LinkedIn and Quest Diagnostics are among the companies now using the app.

All indications are that WalkMe is filling a need. Their virtual events show high engagement, cemented by a high return rate for a second day.

On January 13, it is producing “Anatomy of a Winning Sales Tech Stack,” featuring perspective from eight speakers in the technology space looking to the “new normal.”

As for its big global event, WalkMe hopes for an in-person experience with hybrid components in mid-2021.

“I haven’t decided if I want to dream COVID will be over and we can do a physical event,” Ezer joked.

Trade Show Organizers Urge Officials to Move Las Vegas Convention Center $2.3 Billion Expansion Project Forward
The Las Vegas Convention Center’s need for renovations and new exhibit and meeting space should have already occurred was the consensus among top trade show organizers who…
4 Ways the Event Industry Can Move Forward Post-COVID
Right now, it’s a challenge for many to simply visit the grocery store. What will it be like once things start reopening on a large scale? Will people immediately resume…
Dallas Market Center Moves Forward With August Events
Thanks to strong health and safety measures and a new touchless registration system to protect event participants, more than 95 percent of permanent showrooms will be open…
Outdoor Retailer Moves Winter Market Forward Two Weeks in January
Running traditionally in later January, Emerald Expositions’ Outdoor Retailer will move to Jan. 7-10 show dates for next year in response to not only attendee and exhibitor…
Miami to Move Forward with Convention Center Headquarter Hotel Project
Last week, an overwhelming majority of voters from the City of Miami Beach approved the lease of public land for a privately-funded convention headquarter hotel that will be…
Las Vegas Convention Center's Expansion Moves Forward Pouring 600K Sq. Ft. of Concrete
The massive Las Vegas Convention Center project continued to move forward, with construction workers on behalf of the Las Vegas Convention and Visitors Authority beginning…