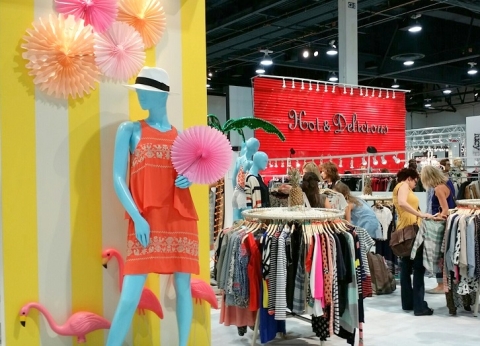 "Both business groups delivered steady progress toward our financial goals for 2015.  Results for the quarter were in line with guidance and the underlying businesses performed well, with continued same-show growth in M&E (Marketing and Events - GES) and organic growth in T&R (Travel and Recreation),” said Steve Moster, Viad’s president and CEO.

He added, “Additionally, our recent acquisitions are meeting expectations and resulting in new business wins.”

Even with the overall decrease in revenues, same-show growth saw a big jump of 7.4 percent. “I think that this bodes well for the industry,” Moster said.

He added a number of sectors had experienced increase and that there was continued growth in the number of exhibitors, attendees and net square footage. Base same-show revenue is expected to increase at a mid-single digit rate in the U.S. throughout the year.

For 2015, the acquisitions of onPeak, Blitz Communications and N200 are expected to provide incremental revenue of $45 million to $50 million and incremental adjusted segment EBITDA of $13 million to $14 million, compared with 2014.

“We are continuing to integrate (these businesses) with GES,” Moster said, adding that the goal is to provide a full suite of services for their clients.

The acquisitions have allowed GES’ existing clients to hire on new services, such as Morgan Stanley, who already utilized GES’ registration and measurement services, and now also added AV.

“As we continue to improve the fundamentals of our businesses through our strategic initiatives and operational efficiencies, we are well positioned to deliver enhanced shareholder value and significant growth in 2016 and beyond,” Moster said.

The state-of-the-art global touring exhibition, which will kick off in the fall of 2016, is inspired by the creatures and environments of the world of Pandora first introduced in the record-breaking film. Fox and GES are developing the interactive attraction in consultation with James Cameron and Jon Landau’s Lightstorm Entertainment.

“This unprecedented global exhibition will create a truly memorable experience for fans,” said Jeffrey Godsick, president of Twentieth Century Fox Consumer Products. “Bringing the world of Pandora to life and comparing it to the wonders of our own planet, the ‘AVATAR’ exhibition will bring together immersive new storytelling and science in a tangible, engaging forum.”

Global Experience Specialists Overall Q3 Revenue Down, Same-show Revenue Up
Negative show rotation was a key factor in Global Experience Specialists’ overall U.S.-based third-quarter revenue posting a 14.6 percent decrease to $143.5 million, compared…
Viad’s 3Q Revenues Increase 36 Percent; GES’ U.S. Revenues Up 39 Percent
The third quarter was a good one in more ways than one for Phoenix-based Viad, as well as its divisions, including Global Experience Specialists in the U.S. and overseas.…
Viad Q2 Revenues Surge Nearly 24 Percent to $317 Million
The second quarter of 2015 was a good one for Phoenix-based Viad, the parent company of Global Experience Specialists, with revenues surging 23.7 percent to $317 million,…
Pico Far East’s Revenues Down 4 Percent in 2017
Hong Kong-listed Pico Far East announced its annual results, for the year ended Oct. 31, 2017. The company reported total revenues of US$510 million, down by 4 percent year-…
Global Sources’ Revenues Down 4.6 Percent, CEO to Retire
Global Sources released its financial results for the year ended Dec. 31, 2015. Revenues from continuing operations in 2015 were US$171.0 million, down 4.6 percent, compared…
Reed Exhibitions’ Revenues Dip 4 percent in 2015
With events spread throughout the world, Reed Exhibitions was not immune to macro economic pressures last year, posting an overall revenue decrease of 4 percent, compared…