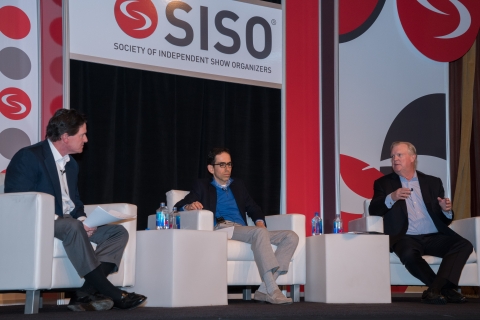 More than 260 for-profit show organizer CEOs, trade show industry suppliers, association leaders and guests gathered for the Society of Independent Show Organizers’ CEO Summit, held April 3-5 at the Fairmont Grand Del Mar in San Diego, to not only take in high-level educational sessions, but also do plenty of networking.

David Audrain, who stepped into the role of SISO executive director earlier this year, said there were two main goals that the organization had for attendees coming to the event.

“Our first goal always for the SISO CEO Summit is to provide an event where the leaders of our industry can network and do business. I believe that we again succeeded with this goal,” Audrain said.

He added, “Our second goal is to provide content/information that is current and meaningful to the C-level attendees it is aimed at, and typically this involves letting them hear from their peers on current day issues and opportunities that affect or provide opportunities for them all.  Here again, I believe we succeeded in providing some excellent content that was of value to our c-level attendees.”

This year’s event had a substantial international contingent, at least 30 percent of attendees, according to Audrain, and also quite a few first-timers.

The event kicked off with an opening reception and dinner, followed by the educational sessions the next morning with Roger Dow, president and CEO of the U.S. Travel Association, talking about “How Travel Impacts the Exhibition Industry Today.”

He said one of the issues his organization has tackled for the past nine years is how to make it easier for visitors to come to the U.S. from overseas. Wait times for visa from countries like Brazil and China were sometimes several months, and now they are cut down to under a week, Dow added.

Another issue he pointed out was that the U.S. desperately needs to upgrade its airports. “We don’t have one airport in the top 25,” Dow said.

Other sessions throughout the day included Scott Diament, president and CEO of the Palm Beach Show Group, detailing how he grew his luxury art and jewelry show portfolio from the ground up.

Jochen Witt, president and CEO of jwc GmbH, led a session that detailed different pricing models that show organizers could consider, including dynamic pricing, which is prevalent in the airline industry.

“We feel pricing does not get the attention it should get” he added. “Price is the most important profit driver because price drives the bottom line.”

During lunch, UBM Advanstar’s Tony Calanca, who is the current SISO chair, said, “Last year has been an eventful year for SISO.”

Besides Lew Shomer stepping down as executive director, he said two new board members were added – Mary Larkin, from Diversified Communications, and Courtney Mueller, from Urban Expositions. Calanca also said the association has grown to 179 total members, with 11 new ones recently added.

Calanca then presented the Robert L. Krakoff Award for Excellence in Leadership to Britton Jones, president and CEO of Business Journals, Inc.

“I’m speechless. Thank you so much, all of you, for this recognition,” Jones said. “I was lucky enough to work with Bob Krakoff, and a lot of us have, over the years. It’s not only a wonderful recognition of me, but the team I am so blessed to work with.”

After lunch, Brian Casey, president and CEO of the Center for Exhibition Industry Research, presented the latest trade show industry numbers. Last year was a good one in the trade show industry, with an overall increase of 3.7 percent increase, marking 22 consecutive quarters of growth.

The next panel featured several global trade show organizers discussing why they found the U.S. to be an attractive market to continue to expand into.

Douglas Emslie, managing director of U.K.-based Tarsus Group, said that before the financial crisis, 60 percent of his company’s portfolio was in Europe, while now it’s mainly in the U.S., with seven shows, and emerging markets.

“(The U.S. market) has been relatively stable and very entrepreneurial as well,” he added.

The last session of the day was led by Joe Pulizzi, founder of Content Marketing Institute, who discussed how having an effective content marketing strategy can lead to more attendees at live events.

“Our magic number is three,” he said. “We want an attendee to be subscribed to at least three content vehicles we have. It builds a relationship with them.”

He detailed several methods that his company has adopted to draw in more people, including online learning, Twitter chats and podcasts.

After a festive night that started and ended with cocktail receptions with a dinner in between, the last day of sessions started off with Richard Mead, managing director of Jordan, Edmiston Group, Inc., talking about the current state of the M&A market in the trade show industry.

Some of his learnings included valuations remain strong, he cited a recent acquisition that had a 16x multiple, and added, “Double-digit multiples are now the norm. I am sure you are glad to hear that, unless you are a buyer.”

Kemp said that most buyers and investors value long, term sustainable growth. "Most buyers are sophisticated and do not reward short term cost reductions," he added. "The buyers will reduce pricing if they suspect that management and ownership has not been investing in the business."

The final session of the day elicited a lot of good stories and laughs, with Kerry Gumas, president and CEO of Questex, moderating a panel with three company leaders – Access Intelligence’s Don Pazour, Diversified Communications’ Ted Wirth and Joe Loggia, who led Advanstar Communications - talking through “What Went Wrong” with some of their investments.

Wirth talked about his company’s decision to go into India a few years ago. Some of the lessons learned, he added, were that they overpaid, everyone wanted to increase their prices immediately and the conference model they were used to didn’t work in India.