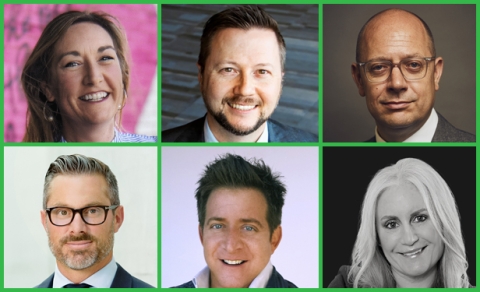 As we move toward the second quarter of 2021, event organizations and suppliers are announcing new hires and promotions far and wide. Check out who’s been moving forward in the trade show industry lately:

Dana Freker Doody has joined the leadership team of live and on-demand digital platform provider JUNO as vice president of marketing and communications. In her new role, Freker Doody will work to develop strategies to serve clients and secure business, while developing a brand-defining communications platform.

She most recently served as vice president of communications and public relations for The Expo Group.

“Ensuring that we serve and care for each partner is critical to our mission [and] Dana will ensure at each step we not just talk the talk but walk the walk,” said Josh Hotsenpiller, CEO of JUNO. “Dana’s brand regard and experience in events, trade shows and hybrid events especially will be a phenomenal service to our clients.”

Marcellus brings 15 years of leadership experience in facilities operations and maintenance, as well as an extensive technical background as a professional engineer to his new role at the VCC. He most recently worked at BC Ferries, where he oversaw and directed the efforts of the Tsawwassen Terminal Maintenance group, supporting operations in Delta, Richmond and on Galiano Island.

“With Don’s leadership and considerable expertise, we will be able to further our organization’s ability to innovate and operate sustainably during this unprecedented time for our industry,” said Craig Lehto, VCC general manager.

The newly formed Exhibitions and Conferences Alliance has tapped Thomas F. “Tommy” Goodwin to be its vice president of government affairs. As an integral member of ECA’s leadership team, Goodwin will help execute the advocacy group’s mission: to increase awareness of live business events’ impact on economies and job creation among policymakers while advocating for the industry’s common interests in order to maintain a favorable operating environment within the U.S.

Goodwin has more than 20 years of experience leading a wide range of government relations, public affairs and issue advocacy efforts for several globally recognized associations and corporations, including Oracle Corp., AARP and the Project Management Institute. He currently serves as president of the National Institute of Lobbying & Ethics and the immediate past chair of ASAE’s Government Relations and Advocacy Professionals Advisory Council.

The Albany Capital Center has promoted Ana Purritano to sales manager. Purritano has been with the ACC since the facility opened in March 2017, serving as event services manager as part of the inaugural staff.

In her new role, Purritano will be responsible for driving revenue to the ACC by maintaining relationships with existing accounts and acquiring new business, interacting with clients prior to their events as well as serving as their on-site day-of coordinator.

Purritano began her career with BBL Hospitality at the Hilton Garden Inn at Albany Medical Center where she managed client relations and event planning.

“With more than seven years of event services experience, we look forward to seeing Ana continue to grow in this role and assist the facility in bringing new business to our region,” said Doug McClaine, ACC general manager.

Reed Exhibitions has been busy promoting new leadership in its UK and Germany/Austria divisions.

Benedikt Binder-Krieglstein, CEO of Reed Exhibitions Austria, has been tapped to lead Reed Exhibitions Germany as its CEO. The Viennese manager joined Reed in 2015 as operational managing director, responsible for Reed Messe Salzburg and Reed Messe Wien. He first gained the CEO title in 2017.

With more than two decades of experience in event and experiential marketing, Stotsky brings extensive experience in entertainment, sports and technology to his new role. He will work closely with the executive and client development teams to help meet client needs while driving growth in new sectors.

Laurie Kamal has been promoted from vice president of finance to president and CFO of MSM Inc.

According to CEO Donna Shultz, who founded the company in 1993 and transformed it from a trade show supplier into a live and digital experiential agency over the past decade, the recent decision to promote Kamal was an easy one.

“After 14 years as MSM’s VP of finance, Laurie has been intimately involved with every aspect of the business — from construction and warehouse operations, to the implementation of our new ERP system, and all high-level customer relationships,” Shultz said. “She has been preparing for this opportunity for years and will undoubtedly propel the organization into a successful new chapter of its legacy.”

Starling joins the agency as senior designer from a career that spans exhibitions, events and as a concept artist for the film industry. Long also joins the creative team as junior CSS designer to continue the in-house expansion of the agency’s creative digital services.

Nicholas and Ramirez both join one of the agency’s key accounts and will focus on developing digital and hybrid services across the agency’s technology, media and broadcast clients. Nicholas joins in a global role as account director, with eight years of experience in developing multi-channel brand activations and campaign measurement for clients.

Have any People News to share? Reach out to lpsavas@tsnn.com.