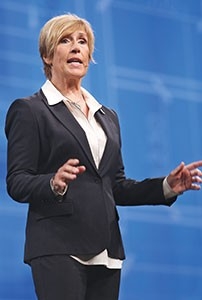 It may have been cold in Chicago in the second week of January, but that didn’t stop a record amount of attendees from coming to the Windy City for the Professional Convention Management Association’s Convening Leaders annual meeting.

From Jan. 11-14, there were 4,128 convention managers and suppliers who packed McCormick Place West, taking part in educational sessions, keynotes and a bevy of networking and charity events throughout the city.

“This year’s program was designed to challenge the most respected leaders in the industry to embrace the spirit of innovation and risk-taking,” said Deborah Sexton, president and CEO, PCMA.

She added, “Our audience showed that, without a doubt, they are ready to accept that challenge and elevate the next generation of meetings, conferences and events.”

There were wide range of keynotes, including long-distance swimmer Diana Nyad talking about what it took to swim from the U.S. to Cuba, to Dan Pallotta, founder and chief humanity officer for  Advertising for Humanity, advising the audience to rethink the way they give to charities.

Besides the high-caliber keynotes, there also were education sessions that spanned everything from the idea of “Un-Marketing: Stop Marketing. Start Engaging” to “Be Proactive Not Reactive to Global Meeting Trends in 2015”.

“We aimed to give our attendees more than education credits,” Kelly Peacy, senior vice president, Education and Events, PCMA, said.

She added, “The roadmap served as a path from inspiring big-picture general session concepts to specific intimate courses with personal and practical takeaways. When our attendees return home, we want them to be able to take what they learned at Convening Leaders and immediately adapt it to their own organizations.”

There also were some other learning opportunities offered outside of the education tracks, including the PCMA Learning Lounge that featured, among other activities, Q&A sessions with keynotes and thought leaders and TechCentral at which attendees could learn about new technology.

Beyond the more than 4,000 attendees who made it to the face-to-face event, there also were another 1,000-plus form 33 countries who took part in the PCMA Convening Leaders Hybrid Event.

“We made no little plans with our hybrid meeting,” Mary Reynolds Kane, senior director, experience marketing, PCMA, says. “This year, we streamed 13 sessions over three days for a full taste of what Convening Leaders offers.”

Reynolds Kane and the PCMA hybrid meeting team infused a virtual networking element to each day of the program, too, with an online happy hour at the end of each day that allowed virtual participants to stay logged on and continue their chat discussions.

PCMA has a major focus on giving back, so there also were plenty of chances to do just that at the annual meeting as well.

Just a few of the events included more than 1,200 attendees taking part in the 22nd year of PCMA’s Party with a Purpose that benefitted Future Founders, Network for the Needy® & PCMA Education Foundation and PCMA’s Hospitality Helping Hands Program that drew 120 individuals to help out at the Greater Chicago Food Depository.

Next year’s PCMA Convening Leaders already is in the works, set for Jan. 10-13 in Vancouver, B.C.